The sex lives of constipated scorpions, cute ducklings with an innate sense of physics, and a life-size rubber moose may not appear to have much in common.

But they all inspired the winners of this year’s Ig Nobels – the prize for comical scientific achievement.

Held less than a month before the actual Nobel Prizes are announced, Thursday’s 32nd annual Ig Nobel prize ceremony was a prerecorded affair for the third year in a row, webcast on the Annals of Improbable Research magazine’s website.

The winners, honoured in 10 categories, also included scientists who found that when people on a blind date are attracted to each other, their heart rates synchronize, and researchers who looked at why legal documents can be so utterly baffling, even to lawyers themselves. 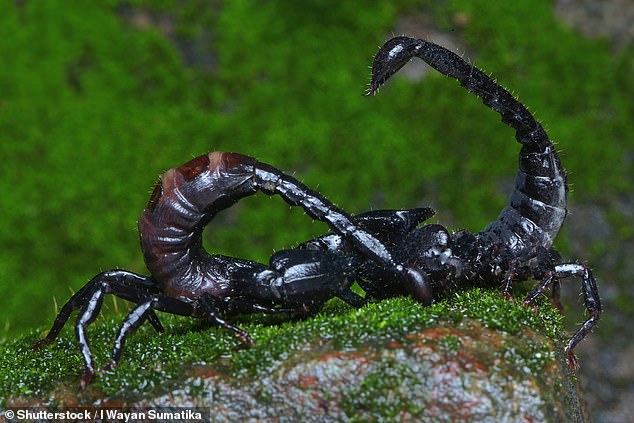 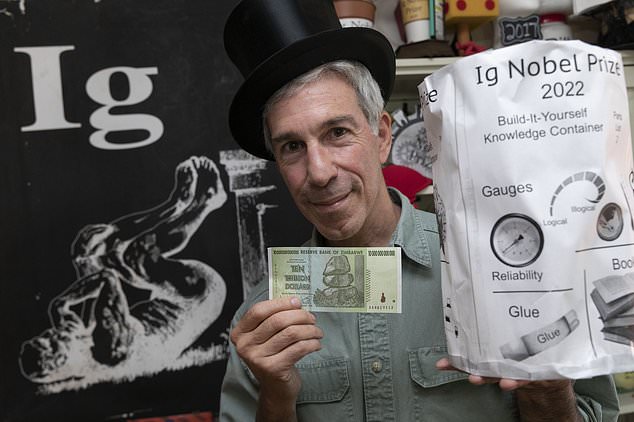 Master of Ceremonies Marc Abrahams poses with the 2022 Ig Nobel prize at his office in Cambridge, Mass

WHAT ARE THE IG NOBEL AWARDS?

The Ig Nobel Prize is a spoof award run by the science humour magazine Annals of Improbable Research.

It was first awarded in 1991 to celebrate ten unusual or trivial achievements in scientific research.

The aim is to ‘honour achievements that first make people laugh, and then make them think.’

The name of the award is a pun on the Nobel Prize, which it parodies, and on the word ignoble (not noble).

The Ig Nobel Prizes are usually presented by Nobel laureates in a ceremony at the Sanders Theater, Harvard University.

Even though the ceremony was prerecorded, it retained much of the fun of the live event usually held at Harvard University.

Curiosity Ig-nited? Learn more about some of the winners:

GET YOUR DUCKS IN A ROW

‘Science is fun. My sort of a tagline is you’re not doing science if you’re not having fun,’ said Frank Fish, a biology professor at West Chester University in Pennsylvania who shared the physics Ig Nobel for studying why ducklings follow their mothers in single-file formation.

He explained that the behaviour is designed to conserve energy – the ducklings are drafting, much like stock cars, cyclists and runners do in a race.

‘It all has to do with the flow that occurs behind that leading organism and the way that moving in formation can actually be an energetic benefit,’ said the appropriately named Fish, whose speciality is studying how animals swim.

He shared the prize with researchers at the University of Strathclyde in Glasgow, Scotland, who found that the ducklings actually surfed in their mother’s wake. 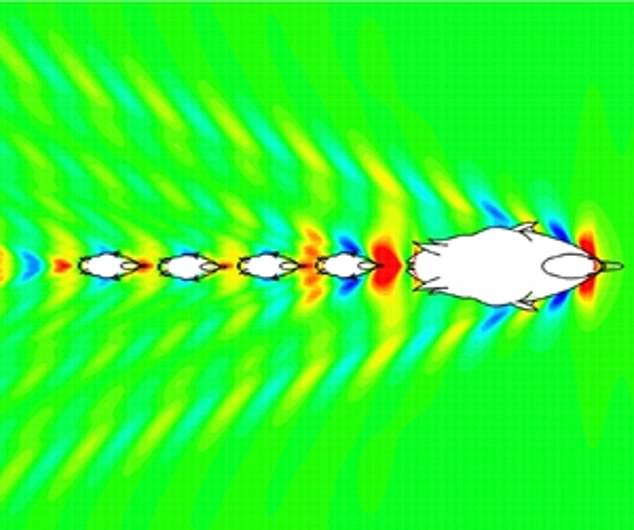 Scientists from the University of Strathclyde found that swimming in a line behind their mother helps to reduce drag, and actually propels the ducklings forwards

We’re often told that copying body language and mannerisms on a first date are surefire signs that your date is interested in you.

But according to researchers in the Netherlands, in-sync sweating and heart rates are much better indicators of a romantic attraction.

In a blind date setting, experts fitted male and female participants with eye-tracking glasses and other devices to measure behavioural and physiological signals.

A stronger indicator of attraction was ‘physiological synchrony’ — in-sync sweating and heart rates — which they say is ‘a precursor of deeper emotional understanding’.

These biological signals, which are covert, unconscious and difficult to regulate, may help people ‘align emotionally’ when they first meet, the researchers say.

Eliska Prochazkova’s personal experiences inspired her research on dating that earned her and colleagues the cardiology Ig Nobel.

She had no problems finding her apparent perfect match on dating apps, yet she often found there was no spark when they met face-to-face.

So she set people up on blind dates in real social settings, measured their physiological reactions and found that the heart rates of people attracted to each other synchronised.

So is her work evidence of ‘love at first sight’?

‘It really depends, on how you define love,’ said Prochazkova, a researcher at Leiden University in the Netherlands. ‘What we found in our research was that people were able to decide whether they want to date their partner very quickly.

‘Within the first two seconds of the date, the participants made a very complex idea about the human sitting in front of them.’

Solimary García-Hernández and Glauco Machado of the University of São Paulo in Brazil won the biology Ig Nobel for studying whether constipation ruins a scorpion’s sex life.

Scorpions can detach a body part to escape a predator – a process called autotomy. But when they lose their tails, they also lose the last portion of the digestive tract, which leads to constipation – and, eventually, death, they wrote in the journal Integrated Zoology.

‘The long-term decrease in the locomotor performance of autotomized males may impair mate searching,’ they wrote. 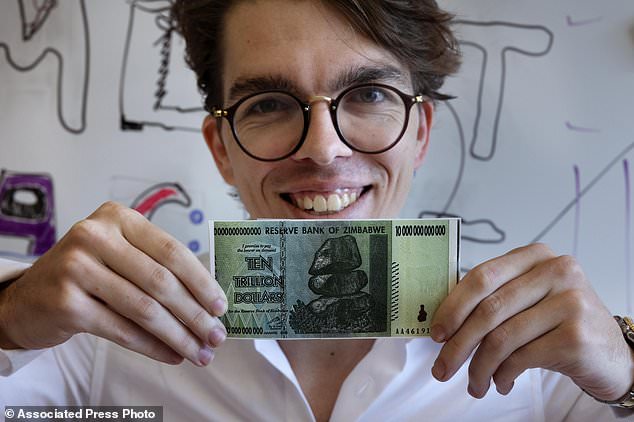 Eric Martinez, who also has a law degree from Harvard University, shared the literature Ig Nobel with Francis Mollica and Edward Gibson for analyzing what makes legal documents unnecessarily difficult to understand

Magnus Gers won the safety engineering Ig Nobel for making a moose ‘crash test dummy’ for his master’s thesis at KTH Royal Institute of Technology in Stockholm, which was published by the Swedish National Road and Transport Research Institute.

Frequent moose vs. vehicle collisions on Sweden’s highways often result in injuries and death to both human and animal, Gers said.

Yet automobile makers rarely include animal crashes in their safety testing.

‘I believe this is a fascinating and still very unexplored area that deserves all the attention it can get,’ he said.

‘This topic is mystical, life threatening and more relevant than ever.’ 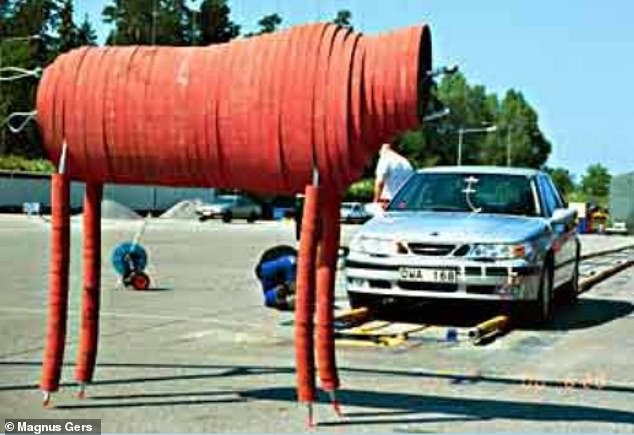 Magnus Gers won the safety engineering Ig Nobel for making a moose ‘crash test dummy’ for his master’s thesis at KTH Royal Institute of Technology in Stockholm, which was published by the Swedish National Road and Transport Research Institute

CAN YOU SPEAK LEGALESE?

Anyone who has ever read a terms of service agreement knows that legal documents can be downright incomprehensible.

That frustrated Eric Martinez, a graduate student in the brain and cognitive science department at the Massachusetts Institute of Technology who also has a law degree from Harvard.

He, Francis Mollica and Edward Gibson shared the literature Ig Nobel for analysing what makes legal documents unnecessarily difficult to understand, research that appeared in the journal Cognition.

‘Ultimately, there’s kind of a hope that lawyers will think a little more with the reader in mind,’ he said.

APPLIED CARDIOLOGY PRIZE Eliska Prochazkova, Elio Sjak-Shie, Friederike Behrens, Daniel Lindh, and Mariska Kret, for seeking and finding evidence that when new romantic partners meet for the first time, and feel attracted to each other, their heart rates synchronize.

BIOLOGY PRIZE Solimary García-Hernández and Glauco Machado, for studying whether and how constipation affects the mating prospects of scorpions.

ENGINEERING PRIZE Gen Matsuzaki, Kazuo Ohuchi, Masaru Uehara, Yoshiyuki Ueno, and Goro Imura, for trying to discover the most efficient way for people to use their fingers when turning a knob.

ECONOMICS PRIZE Alessandro Pluchino, Alessio Emanuele Biondo, and Andrea Rapisarda, for explaining, mathematically, why success most often goes not to the most talented people, but instead to the luckiest.