An extinct reptile that lived among the dinosaurs 150 million years ago has been unearthed in the badlands of Wyoming.

The new species, named Opisthiamimus gregori, measured about 6 inches from nose to tail and and would fit curled up in the palm of an adult human hand.

It lived alongside dinosaurs like Stegosaurus and Allosaurus in North America 150 million years ago, and likely survived on a diet of insects and other invertebrates, according to researchers from the Smithsonian National Museum of Natural History.

The tiny creature is thought to belong to the same ancient lineage as New Zealand’s tuatara, the last living member of a group that has almost entirely been supplanted by lizards.

‘What’s important about the tuatara is that it represents this enormous evolutionary story that we are lucky enough to catch in what is likely its closing act,’ said lead author Dr Matthew Carrano, of the Smithsonian Institution.

‘Even though it looks like a relatively simple lizard, it embodies an entire evolutionary epic going back more than 200 million years.’ 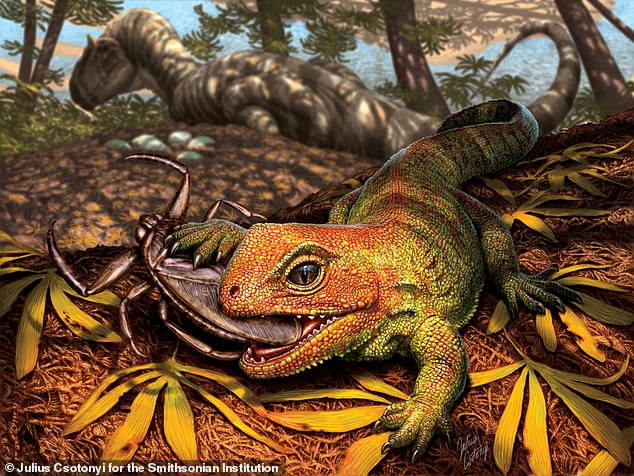 An artistic interpretation of a newly discovered extinct species of lizard-like reptile belonging to the same ancient lineage as New Zealand’s living tuatara. The newly discovered Opisthiamimus gregori preys on a now-extinct water bug (Morrisonnepa jurassica), while in the background the predatory dinosaur Allosaurus jimmadseni guards its nest.

The discovery comes from a handful of specimens – including an extraordinarily complete and well-preserved fossil skeleton – found near an Allosaurus nest in northern Wyoming’s Morrison Formation.

While it looks like a lizard, it is actually a rhynchocephalian – an order that diverged from lizards at least 230 million years ago.

But for reasons that still are not fully understood, rhynchocephalians all but disappeared as lizards and snakes grew to be the more common and more diverse reptiles across the globe.

Now the only remaining member of this ancient animal order is New Zealand’s tuatara, which is about five times longer than Opisthiamimus gregori and looks a bit like a stout iguana.

Features that distinguish it from lizards include teeth fused to the jaw bone, a unique chewing motion that slides the lower jaw back and forth like a saw blade, a 100-year-plus lifespan, and a tolerance for colder climates. 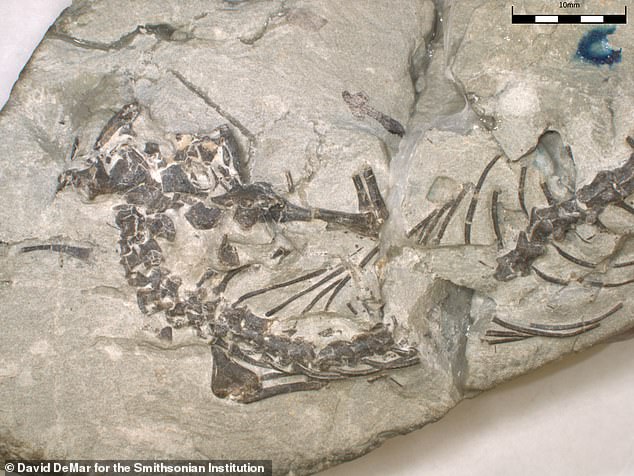 Fossil skeleton of the new lizard-like reptile Opisthiamimus gregori. The fossil was discovered in the Morrison Formation of the Bighorn Basin, north-central Wyoming, and dates to the Late Jurassic Period, approximately 150 million years ago

The world’s first gliding reptile evolved 260 million years ago thanks to changes in tree canopy, a new study suggests.

Researchers at the French National Museum of Natural History, Paris, and the Staatliches Museum für Naturkunde Karlsruhe, Germany, have pieced together fossils of Coelurosauravus elivensis, an extinct species of reptile with a name meaning ‘hollow lizard grandfather’.

The remains suggest the species evolved to grow a patagium – a wing-like membrane on each side – to facilitate flight.

This allowed it to adapt from a habitat where the trees went from densely packed to one where there trees were more separated.

Rhynchocephalians are mostly known to paleontologists from small fragments of their jaws and teeth, because their frail bones were often destroyed either before they fossilised or as they emerge from an eroding rock formation in the present day.

However, one of the fossils found in the Morrison Formation is almost entirely complete, with the exception of the tail and parts of the hind legs, making it exceptionally rare.

The researchers have now carried out CT scans of the fossil to create a 3D representation of the specimen with with accuracy smaller than a millimetre.

They then reassembled the digitised bones of the skull – some of which were crushed, out of place or missing on one side – using software to eventually create a nearly complete 3D reconstruction.

The reconstructed skull gave researchers an an unprecedented look inside the Jurassic-age reptile’s head – revealing that it may have eaten prey with harder shells such as beetles or water bugs as well as insects.

Co-author David DeMar, a research associate, added: ‘Such a complete specimen has huge potential for making comparisons with fossils collected in the future and for identifying or reclassifying specimens already sitting in a museum drawer somewhere.

‘With the 3D models we have, at some point we could also do studies that use software to look at this critter’s jaw mechanics.’

Opisthiamimus gregori has now been added to the Smithsonian museum’s collections, where it will remain available for future study.

It may help researchers figure out why the tuatara is all that remains of the rhynchocephalians, while lizards have spread round the planet.

‘These animals may have disappeared partly because of competition from lizards but perhaps also due to global shifts in climate and changing habitats,’ said Carrano.

‘It’s fascinating when you have the dominance of one group giving way to another group over evolutionary time, and we still need more evidence to explain exactly what happened, but fossils like this one are how we will put it together.’

He spent hundreds of hours meticulously scraping and chiseling the bones from a block of stone that first caught museum fossil preparator Pete Kroehler’s eye back in 2010.

Dr Carrano said: ‘Pete is one of those people who has a kind of X-ray vision for this sort of thing.

‘He noticed two tiny specks of bone on the side of this block and marked it to be brought back with no real idea what was in it. As it turns out, he hit the jackpot.’

Opisthiamimus is described in the Journal of Systematic Palaeontology.