Not so bird-brained after all! Footage shows how cunning cockatoos have learned to pry open bins with their beaks to steal rubbish – despite owners placing BRICKS on the lids

They’re not known for being the smartest animals, but it seems that when it comes to opening bins, cockatoos aren’t so bird-brained after all.

Residents in southern Sydney, Australia, are locked in an ‘arms race’ with the birds over their rubbish.

While people have been using inventive ways to deter the birds, such as placing bricks on the lids, cockatoos have learned to pry them open anyway to steal the rubbish within.

Researchers from the Max Planck Institute of Animal Behaviour have detailed these techniques in a new study. 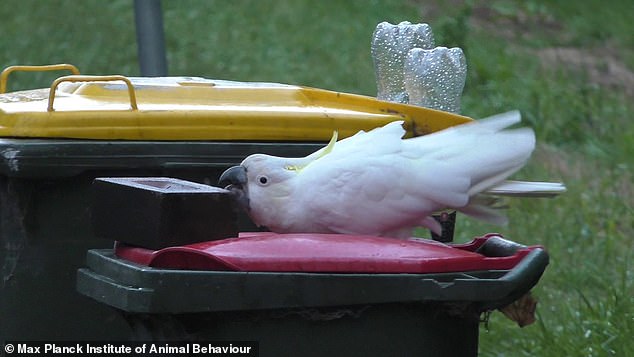 Residents in southern Sydney, Australia, are locked in an ‘arms race’ with the birds over their rubbish

The Sulphur-crested Cockatoo is a large white parrot.

It has a dark grey-black bill, a sulphur-yellow crest and a yellow wash on the underside of the wings.

Sexes are similar, although the female can be separated at close range by its red-brown eye (darker brown in the male).

This is a noisy and conspicuous cockatoo, both at rest and in flight. Young Sulphur-crested Cockatoos resemble the adults.

‘When I first saw a video of the cockatoos opening the bins I thought it was such an interesting and unique behaviour and I knew we needed to look into it,’ said Dr Barbara Klump, lead author of the study.

Cockatoos have learned that bins have food waste hidden inside, and will do anything it takes to reach it, according to Dr Klump.

‘Once one gets a bin open all the cockatoos in the vicinity will come and try to get something nice to eat.’

The birds tend to use their beaks to pry the bin lids open, before manoeuvring themselves onto the rim and flipping the lid open.

And this technique is a ‘community affair’, according to Dr Klump.

‘We could actually show that this is a cultural trait,’ she said.

‘The cockatoos learn the behaviour from observing other cockatoos and within each group they sort of have their own special technique, so across a wide geographic range the techniques are more dissimilar.’

While you might think that the residents could simply secure the bin lids completely closed to keep the cockatoos at bay, unfortunately this would stop a rubbish lorry from being able to tip them out.

Instead, a survey revealed how residents put bricks and stones on their bin lids, strap water bottles to the top, rig ropes to prevent the lid from flipping and even use sticks to block the hinges.

‘There are even commercially available cockatoo locks for bins,’ Dr Klump said.

Learned behaviour isn’t just seen in the cockatoos – it’s also prevalent in the residents, according to the researchers.

‘People come up with new protection methods on their own, but a lot of people actually learn it from their neighbours or people on their street, so they get their inspiration from someone else,’ Dr Klump explained.

While the winner of this particular arms race remains unclear, the researchers say they expect to see more of these kinds of human-wildlife interactions in the future.

‘As cities expand, we will have more interactions with wildlife,’ Dr Klump concluded.

‘I’m hoping that there will be a better understanding and more tolerance for the animals that we share our lives with.’