The first four-legged animals to walk on land had fewer skull bones than fish – limiting their evolution for millions of years, according to new research.

Tetrapods were the earliest land animals with limbs and digits, and are the ancestors of everything from amphibians to humans.

However, a new analysis of fossilised animal skulls reveals that tetrapods had more complex connections between their skull bones than fish.

Rather than promoting the diversification of life on land, these connections actually restricted the evolution of tetrapod skulls, according to the researchers. 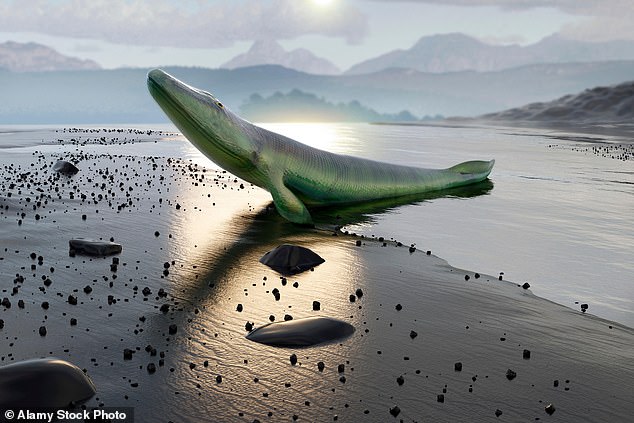 Tetrapods were the earliest land animals with limbs and digits, and are the ancestors of everything from amphibians to humans. Pictured: Mock-up of an early tetrapod 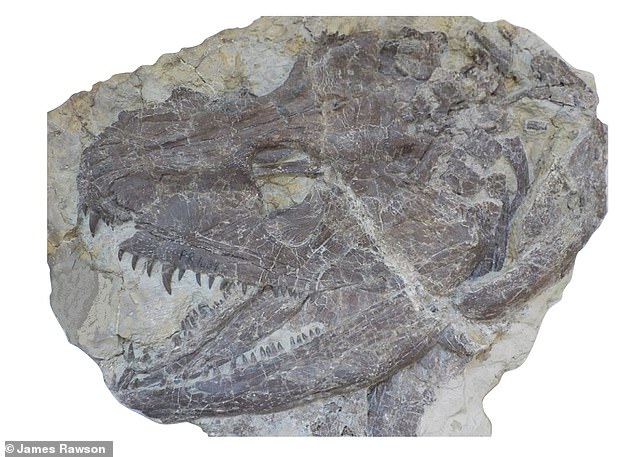 Fossil of a Whatcheeria, an extinct genus of early tetrapod from the Early Carboniferous of Iowa

The sophisticated network of nerves connecting our eyes to our brains evolved 100 million years earlier than previously thought – a discovery that ‘literally changes the textbook’.

It was previously thought that the connection first evolved in terrestrial creatures and, from there, carried on into humans where scientists believe it helps with our depth perception and 3D vision.

However, ateam of international scientists found the connection scheme was already present in the ancient gar fish that lived 450 million years ago, which means the eye-brain connection pre-dates animals living on land.

The discovery is based on an analysis of fossils across the transition from an aquatic to terrestrial environment.

The researchers studied the skull bones of over 100 living and fossil animals to better understand how skulls changed as tetrapods evolved.

‘Tetrapod skulls generally have fewer skull bones than their fish ancestors, but simply counting the number of bones misses some important data,’ said lead author James Rawson, of the University of Bristol.

‘We used a technique called network analysis, where the arrangement of skull bones – which bones connect to which – is recorded in addition to bone number.’

Co author Dr Borja Esteve-Altava, of Pompeu Fabra University, Barcelona, who is an expert in this technique, said: ‘Traditionally, anatomy research has been mostly descriptive or qualitative.

‘Network analysis provides a sound mathematical framework to quantify anatomical relations among bones: a kind of data often overlooked in most studies on morphological evolution.’

The authors found that tetrapods having fewer skull bones than fish made the organisation of their skulls more complex.

Mr Rawson added: ‘It might seem strange, but having fewer bones means each of those bones must connect with more of its neighbours, resulting in a more complex arrangement.

‘Modern frogs and salamanders had the most complex skulls of all the animals we studied.’

The skulls of the earliest tetrapods also became more consolidated into a single unit, whereas their fish ancestors had skulls made of several distinct sections.

Senior author Professor Emily Rayfield, also from Bristol, said: ‘We were surprised to find these changes to the skull seemed to limit tetrapod evolution, rather than promoting radiation to new habitats on land.

‘We think the evolution of a neck, extinction events or a bottleneck in skull development may be responsible.’ 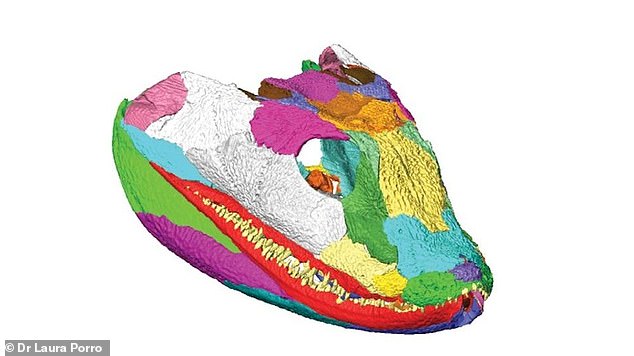 Image showing skull bones of an Acanthostega, an extinct genus of stem-tetrapod, among the first vertebrate animals to have recognisable limbs

Tetrapods emerged roughly 397 million years ago during the Devonian Period. They evolved from a group of vertebrates known as the tetrapodomorphs.

They were a lineage of ancient fish whose paired, fleshy fins turned into limbs with digits.

Mr Rawson, a PhD student, added: ‘We also see a similar drop in structural variability for the limb bones in early tetrapods, but the drop in the limbs happens 10 million years earlier.

‘It seems that different factors were affecting skull and limb evolution in early tetrapods, and we have so much more to learn about this crucial time in our own evolutionary history.’

The study has been published in the journal Science Advances.

How fins became legs: Lobe-finned fish that lived 375 million years ago are the best-known transitional species between fish and land-dwelling tetrapods

The Tiktaalik rosae was a lobe-finned fish that lived in the late Devonian period, but had features similar to four-legged animals.

A 375 million-year-old fossil Tiktaalik roseae fossil was discovered in 2004 on Ellesemere Island in Nunavut, Canada.

It represents the best-known transitional species between fish and land-dwelling tetrapods – until the discovery of the more recent ‘Tiny’ fossil.

A fish with a broad flat head and sharp teeth, Tiktaalik looked like a cross between a fish and a crocodile.

It had gills, scales and fins, but also had tetrapod-like features such as a mobile neck, robust ribcage and primitive lungs.

In particular, its large forefins had shoulders, elbows and partial wrists, which allowed it to support itself on ground. 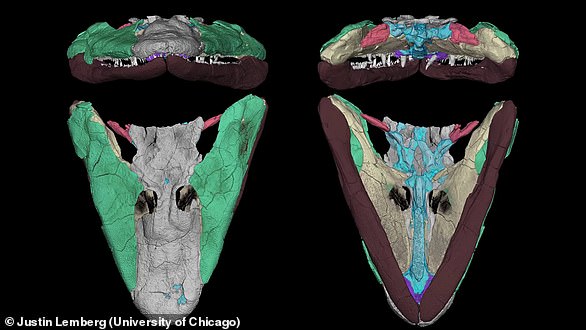 In 2013, researchers re-evaluated the fossil and discovered that the fossil had a well-preserved pelvis and fin.

The find challenged the theory that large, mobile hind appendages were developed only after vertebrates transitioned to land.

Previous theories, based on the best available data, propose that a shift occurred from “front-wheel drive” locomotion in fish to more of a ‘four-wheel drive’ in tetrapods.

But experts claim this shift actually began to happen in fish, not in limbed animals.

For example, the team discovered the Tiktaalik’s pelvic girdle was nearly identical in size to its shoulder girdle.

It had a prominent ball and socket hip joint, which connected to a highly mobile femur.

Crests on the hip for muscle attachment indicated strength and advanced fin function.

And although no femur bone was found, pelvic fin material – including long fin rays – indicate the hind fin was at least as long as its forefin.