Stunning new images captured by the world’s most powerful solar telescope show the face of the sun in astonishing never-before-seen detail.

The amazing shots, released by the US National Solar Observatory, show the sun’s ‘chromosphere’ – the second layer in our sun’s atmosphere, literally translating as ‘the sphere of colour’.

One image shows a forest of hair-like jets of plasma rising through the chromosphere, extending up to 6,200 miles (10,000 km) into the corona (the outermost part of the sun’s atmosphere) above. 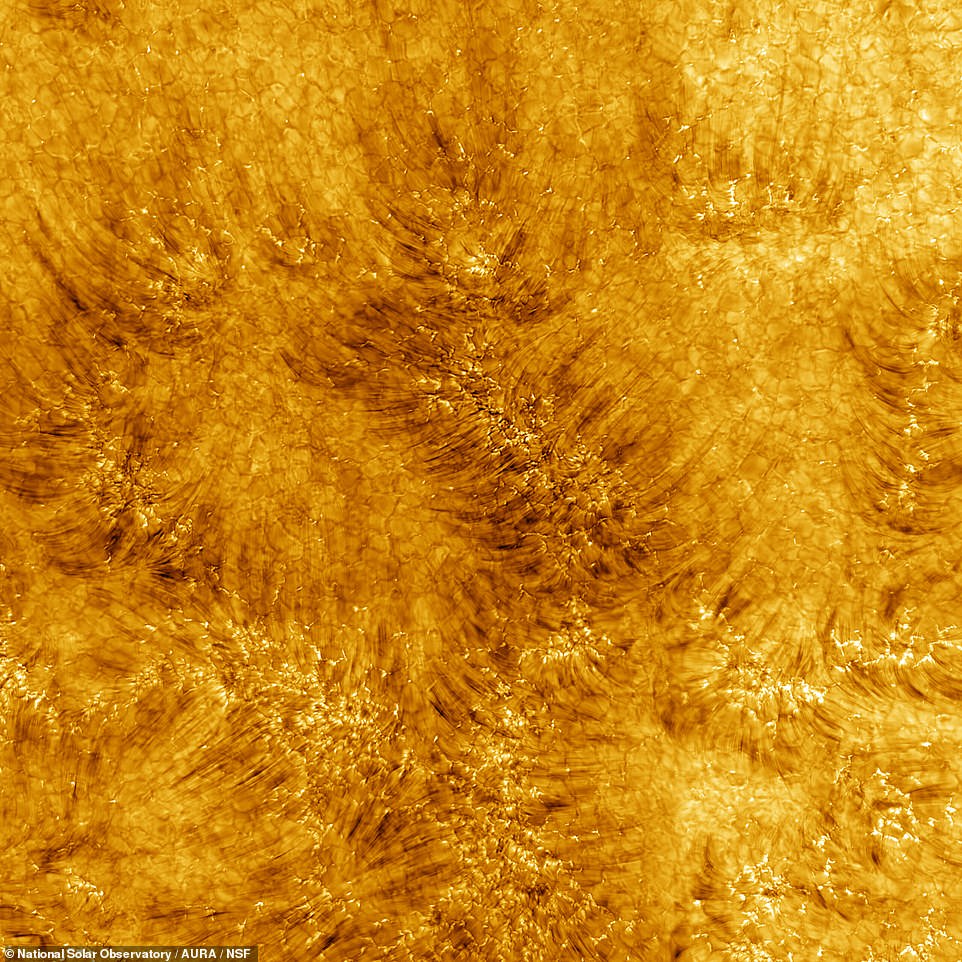 This image show a forest of hair-like jets of plasma, or spicules, rising through the chromosphere, extending up to 6,200 miles (10,000 km) into the corona above 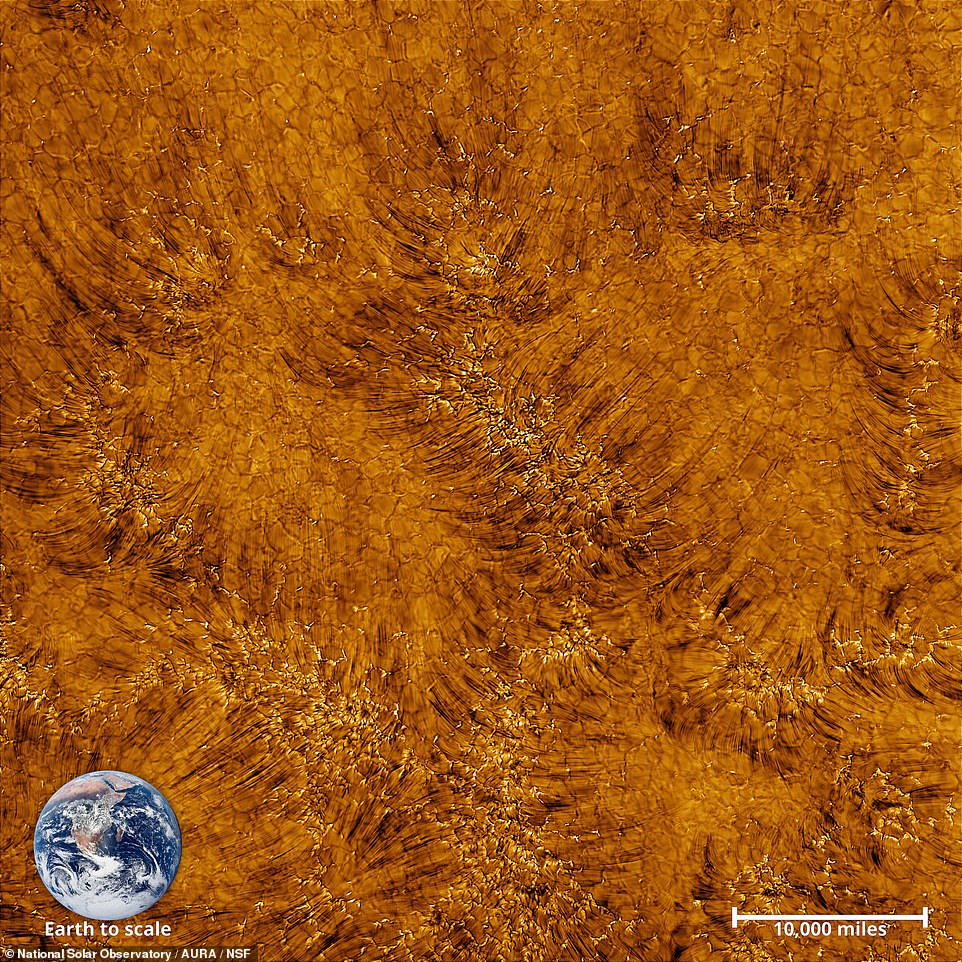 The image, shown here with the Earth overlaid for scale, shows a region 82,500 kilometers across at a resolution of 11 miles (18km). This darker image better highlights the golden cell-like structures in the background, each about the size of Texas 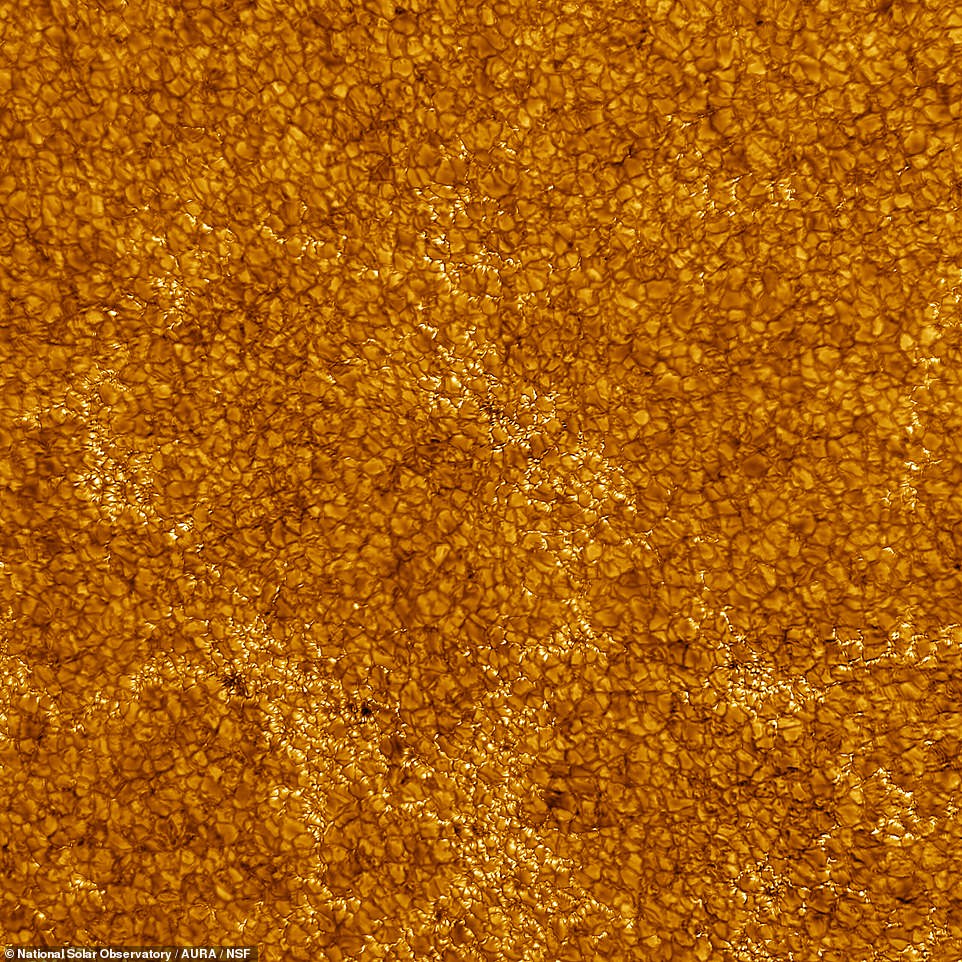 The surface of the sun taken with the Daniel K. Inouye Solar Telescope. The image shows a region 82,500 kilometers across at a resolution of 18 km. Note the cell-like structures – each about the size of Texas – packed together like a honeycomb

The chromosphere is the second layer in our sun’s atmosphere.

It extends for about 1,200 miles above the visible surface of the sun.

The chromosphere is above the photosphere, the visible ‘surface’ of the sun.

It lies below the solar corona, the sun’s upper atmosphere, which extends many thousands of kilometers above the chromosphere into space.

Also seen are golden cell-like structures – each about the size of Texas – packed together like a honeycomb, which are the signature of violent motions that transport heat from inside the sun to its surface.

National Solar Observatory’s new images were taken by the Daniel K. Inouye Solar Telescope, the world’s most powerful solar telescope on the island of Maui, Hawaii.

National Solar Observatory (NSO) released the images this week in celebration of the recent inauguration of the telescope, which is funded by National Science Foundation (NSF).

‘NSF’s Inouye Solar Telescope is the world’s most powerful solar telescope that will forever change the way we explore and understand our sun,’ said NSF Director, Sethuraman Panchanathan.

‘Its insights will transform how our nation, and the planet, predict and prepare for events like solar storms.’

These images of the chromosphere – which extends for about 2,000 kilometers (1,200 miles) above the visible surface of the sun – were taken on June 3 this year.

Daniel K. Inouye Solar Telescope has already produced images of a sunspot, released by NSF at the end of 2020.

Sunspots are areas that appear dark on the sun’s surface, because they are cooler than other parts areas (although they’re still very hot, around 6,500°F).

They are associated with solar flares and coronal mass ejections, which are key focuses of astronomers due to the idea that they cause space weather events that impact Earth.

These events affect technological life on our planet such as power grids, communications, GPS navigation, air travel, satellites and humans living in space. 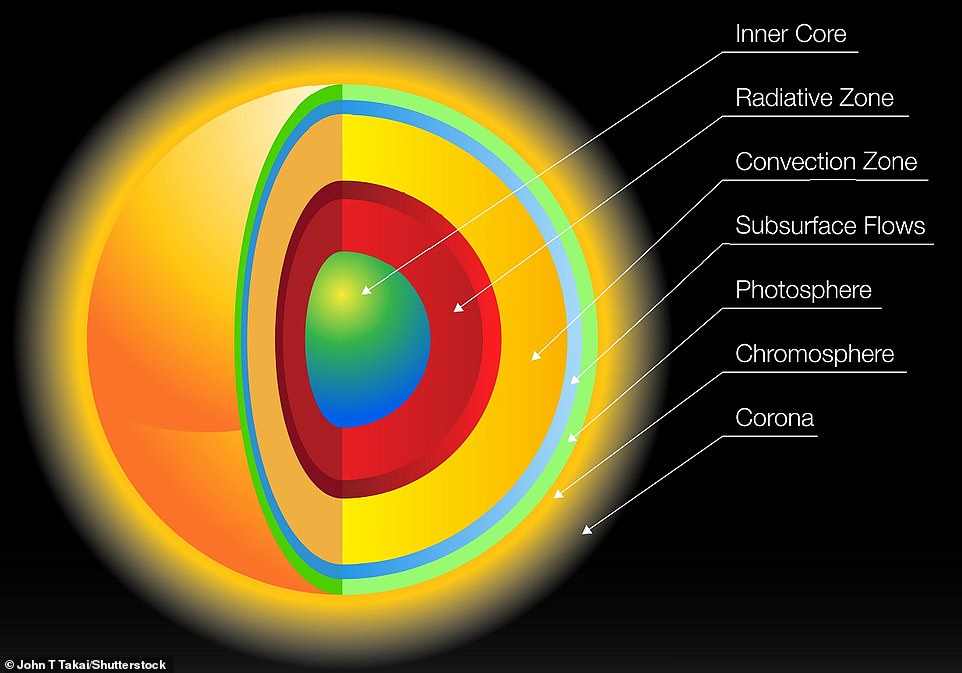 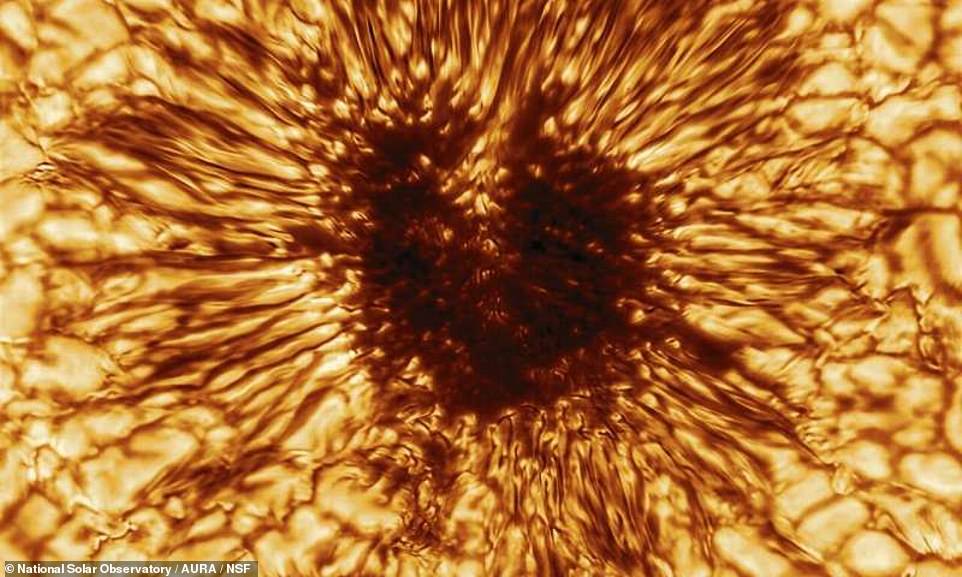 The world’s largest solar telescope captured its first image of a sunspot and just shared it to the world. The entire sunspot measures about 10,000 miles across – large enough for the entire Earth to comfortably fit inside

OUTER LAYERS OF THE SUN

The outer layers of the Sun are the Photosphere, the Chromosphere, the Transition Region and the Corona.

Photosphere – The deepest layer of the Sun that we can observe directly.

It reaches from the surface visible at the centre of the solar disk to about 250 miles (400 km) above that.

Most of the photosphere is covered by granulation.

Corona – The corona is the outermost layer of the Sun, starting at about 1300 miles (2100 km) above the solar surface (the photosphere).

The corona cannot be seen with the naked eye except during a total solar eclipse, or with the use of a coronagraph.

The corona does not have an upper limit.