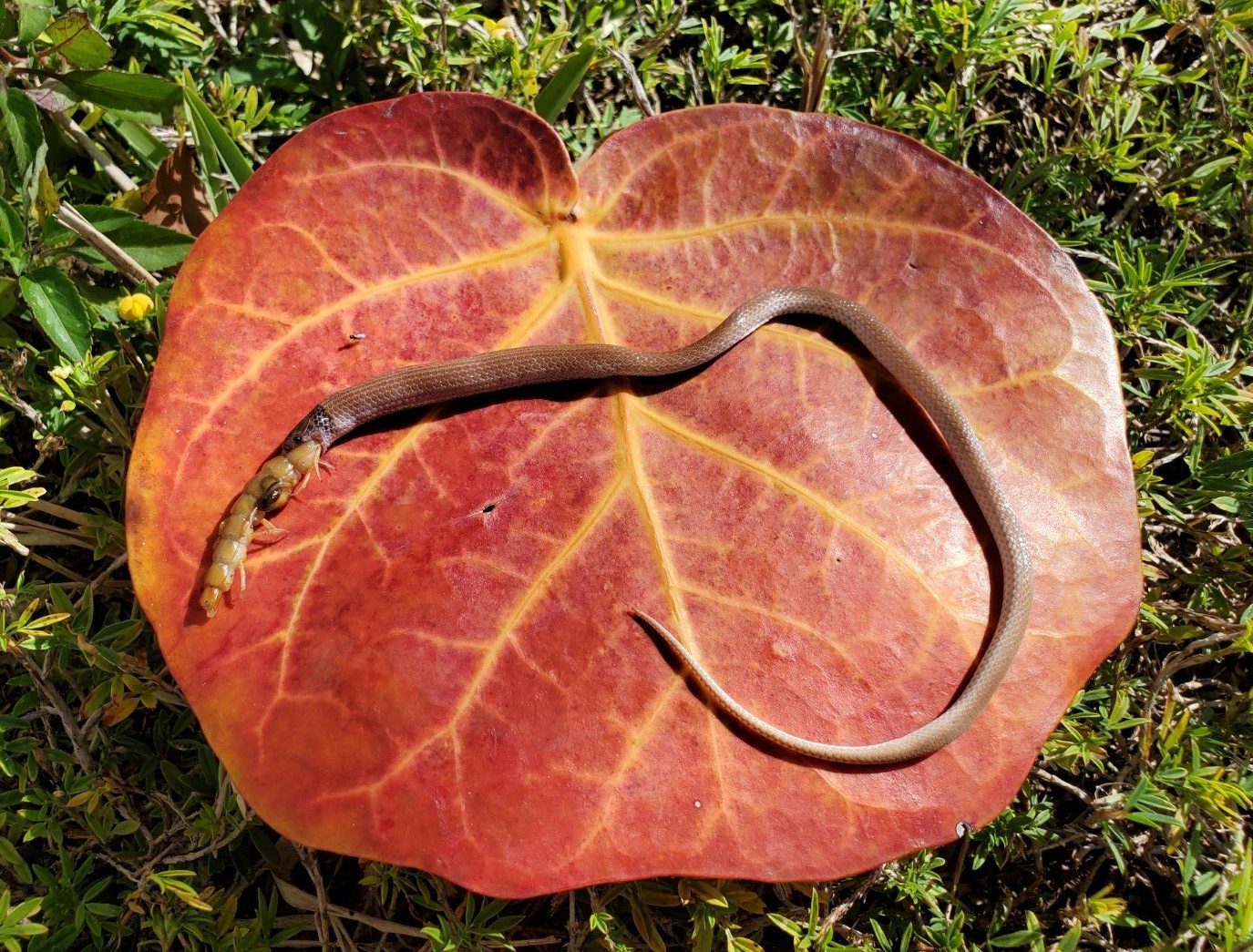 Scientists have learnt an important — if brutal — lesson from a rare snake spotted in the Florida Keys.

The Tantilla oolitica (rim rock crowned snake) was recently spotted on the island chain for the first time in four years. Unfortunately for the animal, it was found dead with a half-swallowed giant centipede in its mouth.

Macabre as this frozen tug-of-war may be, researchers say it’s still a useful discovery.

Before now, scientists didn’t know exactly what the species ate because they’ve been spotted so rarely. In fact, T.oolitica is the rarest snake in North America.

But the species’ preference for giant centipedes isn’t a total suprise, as other related snakes are known to enjoy snacking on the bugs.

The battling creatures were first noticed by a hiker in John Pennekamp Coral Reef State Park in Key Largo. They were then transferred to the Florida Museum of Natural History, where experts could investigate the find.

‘I was amazed when I first saw the photos,’ said Coleman Sheehy, the Florida Museum’s herpetology collection manager. ‘It’s extremely rare to find specimens that died while eating prey, and given how rare this species is, I would never have predicted finding something like this. We were all totally flabbergasted.’

Sheehy and team created a 3D model of the duelling creatures with a CT scanner to try and work out exactly how the snake died.

‘We were able to perform a digital autopsy, which allowed us to examine the centipede and snake, including its injuries and gut contents, without ever picking up a scalpel,’ said Jaimi Gray, a postdoctoral associate at the museum.

As some snakes are known to eat animals much wider than themselves with the help of incredible expanding jaws, the team weren’t convinced T.oolitica had simply choked on the giant centipede.

A wound on the snake’s side suggested its prey might instead have pierced it in combat and injected some kind of venom into it’s would-be predator.

Some snakes are thought to be able to resist centipede venom, but that hasn’t been demonstrated before.

In any case, the wound only seemed to have caused a small amount of internal bleeding — and it certainly didn’t stop the snake from half-eating the bug —leading the researchers to consider other explanations.

Instead, they believe the snake’s eyes really were too big for its belly. The CT scans show its trachea was pinched around the area where the centipede’s body was the widest. This could have blocked the snake’s airway, suffocating it.

On a more positive note, the researchers hope the discovery means there’s a stable T.oolitica population in the Florida Keys.

Once a thriving species, the rarely-spotted snake has been listed as ‘threatened’ in Florida since 1975 and is thought by some to be on the verge of extinction.

Sheehy said: ‘We can’t say for sure whether or not they’re still present in peninsular Florida. Absence of evidence is not evidence of absence, but their habitat has basically been destroyed.’

He also also hope the team’s CT models will help other researchers learn more about the animals. They have been published online, alongside a research paper detailing the investigation in Ecology.

‘This study is just the beginning of what will be learned about this enigmatic species from the CT-scan data,’ Sheehy added.