The annual ritual of Apple’s iPhone reveal is set to take place early on Thursday morning. And while there’s a limit to how many surprises we can expect after 15 straight years of iterative smartphone upgrades, potential upgraders should know that all signs point to significant new technology in the pricey iPhone 14 Pro models, though not so much elsewhere.

Rumours point to Apple once again introducing four models of phone this year, although the range will be a bit different than in 2021. The company was reportedly not too happy with the sales of its mini-sized iPhone 12 and iPhone 13 — or at least not happy enough to continue the added cost of creating three differently shaped phones — so the iPhone 14 is expected to come only in the regular 6.1-inch and Max 6.7-inch sizes. 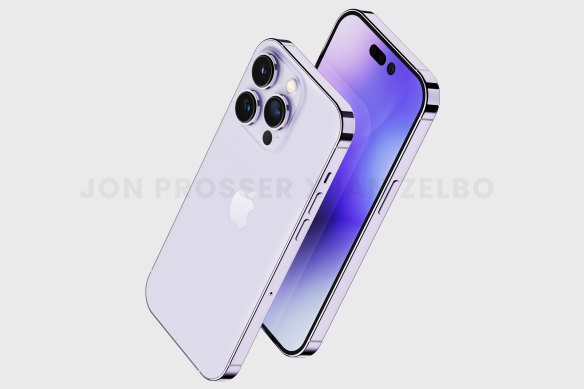 A render of what the iPhone 14 Pro could potentially look like.Credit:Jon Prosser & Ian Zelbo

It’s believed each size will have both a regular and Pro version, which would mark the first time since 2018 that Apple unveiled a big phone without the Pro moniker. It’s safe to assume, although not exactly guaranteed, that these phones will be called iPhone 14, iPhone 14 Max (or Plus), iPhone 14 Pro and iPhone 14 Pro Max.

As for new features the Pro models will reportedly be getting a new pill-shaped display cutout to house the Face ID hardware, replacing the existing notch, as well as new rear camera hardware and a long-awaited always-on display. The standard models are expected to be much more similar to the iPhone 13.

Some analysts have even said the standard phones will keep last year’s processor while the Pro models will be upgraded to a new A16 chip. This would be the first time Apple used two different chips in the same generation, and could point to supply issues related to the current global semiconductor shortage.

On the watch side, Apple is expected to unveil the Apple Watch Series 8 as well as a larger and hardier Apple Watch Pro designed for extreme outdoorsy use. Apple usually offers an older model watch alongside the latest and greatest, and some analysts have suggested a new Watch SE could also arrive this year to tidy the lineup down to just three new devices.

So what was Apple on about with its invitation to this year’s event, which featured a galactic image and the text “far out”? It could refer to some astrophotography feature, but existing iPhones are already pretty good at that. Some have suggested that Apple has struck a deal with satellite company Globalstar, which recently disclosed a $US300 million ($441 million) contract with an unnamed customer. This could potentially mean the ability to send an SOS message from your phone or watch over satellite, if you didn’t have mobile reception, for example when out in the wilderness.

As is often the case, everything we think we know about Apple’s plans comes from reporters with sources inside Apple including Bloomberg’s Mark Gurman, supply chain analysts such as Ming-Chi Ko of TF International Securities, and other factory sources such as dummy manufacturers and protective case makers. Though information on the devices’ physical appearance tends to be accurate, Apple has more secrecy over software plans and there could always be a surprise or two at the event.

We’ll find out for sure from 3am on Thursday, when all will be revealed.