LG unveils the world’s largest OLED TV: ‘Awe-inspiring’ device has a 97-INCH screen and could go on sale in time for the FIFA World Cup – for a rumoured £20,000

LG has showcased the world’s largest OLED TV with an ‘awe-inspiring’ 97-inch screen – about the size of a double bed.

The OLED evo Gallery Edition TV, which is being displayed at IFA 2022 in Berlin this week, will be available towards the end of the year.

The Korean firm said it will ‘deliver immersive viewing experiences on a grand scale’ when it’s released, which should be in time for the FIFA World Cup.

The firm is yet to reveal a price for the monster display, although it’s rumoured to be more than £20,000. 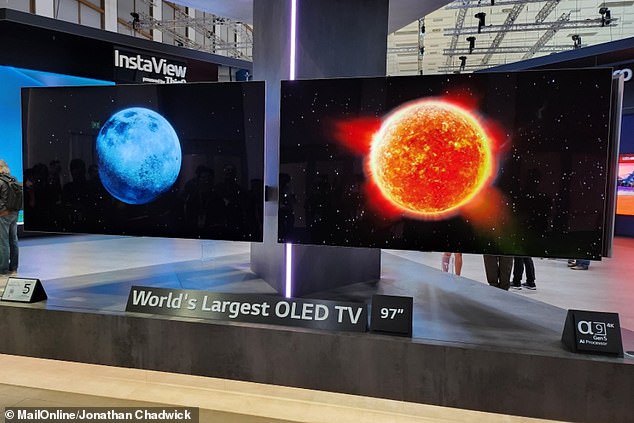 The Korean firm said it will ‘deliver immersive viewing experiences on a grand scale’ when it’s released, which should be in time for the FIFA World Cup 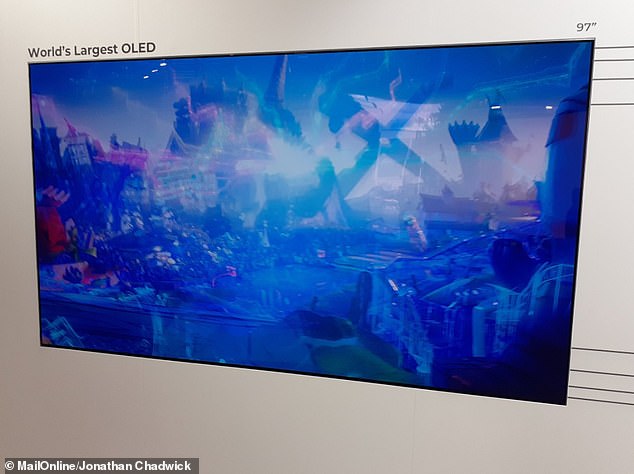 It is the only TV technology to create colour like this. LCDs, for instance, use colour filters and liquid crystals that block light to create an image.

This means OLEDs can be thinner and more flexible than any other television technology currently on the market.

Specific launch dates for ‘key markets’ will be revealed in the following weeks, LG said.

OLED TVs use self-lit pixels that can be turned on and off individually to reproduce ‘perfect blacks and incredibly natural colours’.

But LG describes this new TV as ‘OLED evo’, which is essentially a term coined by the Korean company to refer to an OLED display with enhanced brightness.

The huge TV, which is designed to be wall-mounted, is part of LG’s G2 line-up of TVs, which are based on OLED display technology with 4K resolution and flat design.

It also has ‘advanced AI-based image-processing technologies’ to deliver lifelike images and a immersive and cinematic viewing experience.

‘The undisputed leader of the global premium TV market for nine consecutive years, LG OLED has become the choice of millions of consumers worldwide.’

It’s not known when LG’s massive new model will become available, although it will likely be before the World Cup kicks off on November 20.

‘The timing of a winter tournament so near to the holiday season should help to boost interest here.’ 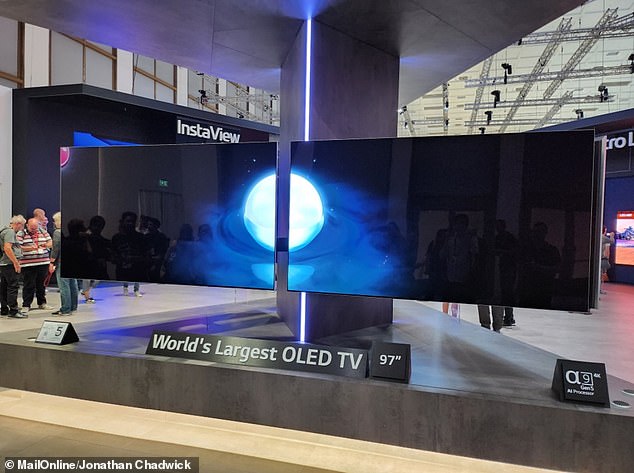 LG has an enormous booth to itself at IFA 2022 this week to showcase new products, from TVs to gaming monitors and smart home solutions.

Held annually, IFA, or Internationale Funkausstellung, is one of world’s leading trade shows for consumer electronics and home appliances, held annually in Berlin.

This year’s IFA runs from September 2-6 and is the first full-scale in-person event for three years, due to disruption by the Covid pandemic in 2020 and 2021.

MailOnline is attending the show, bringing you all the latest news as it happens from Berlin.

Taiwanese company Asus has launched the Zenbook 17 Fold OLED, a laptop with a foldable screen, but it will set users back £3,000.

The ‘futuristic device’, launched at IFA Berlin on Wednesday, has a 17.3-inch foldable OLED touchscreen with a hinge down the middle.

Asus says the touchscreen folds down to a compact 12.5-inch size, making it smaller than a sheet of photocopier paper for carrying in your bag.

The device will roll out globally during the fourth quarter (the last three months of the year) but it won’t come cheap – prices start at an eyewatering $3,499 (£3,000).