Child counsellors of the future could be ROBOTS: Kids are more confident divulging private information to bots than to humans, study reveals

From The Iron Giant to Ron’s Gone Wrong, many blockbuster hits feature friendships between robots and children.

Now, a new study has revealed how these relationships could prove useful in the real world.

Researchers from Cambridge University say that children are more confident divulging private information to robots than to humans.

Based on the findings, they suggest that child counsellors of the future could take the form of humanoid robots. 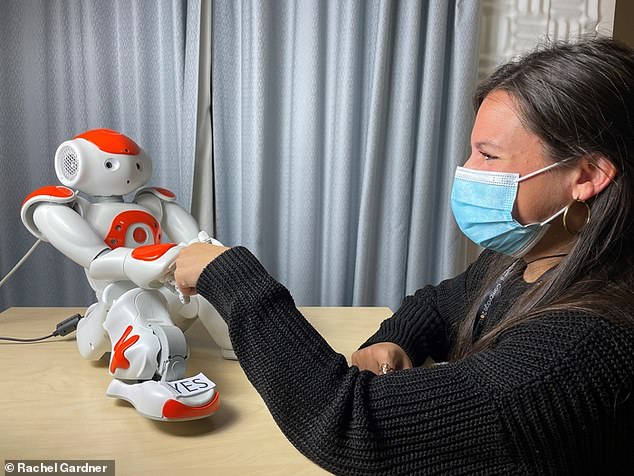 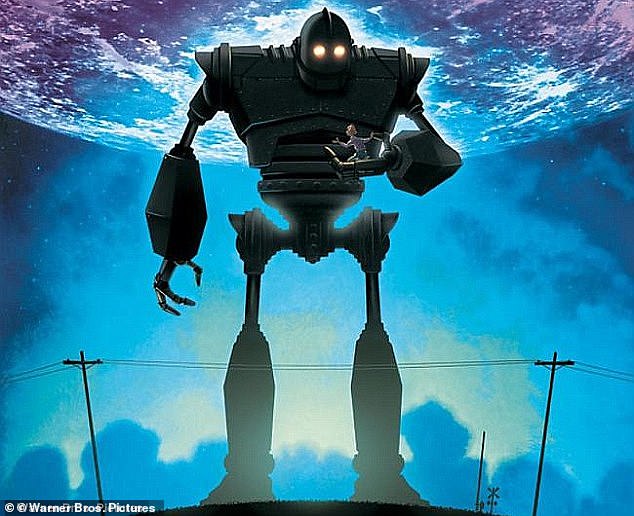 From The Iron Giant (pictured) to Ron’s Gone Wrong, many blockbuster hits feature friendships between robots and children

People quickly become convinced that a human-like robot is capable of independent thoughts and emotions, a new study has found.

This occurs when a robot appears to act on its own beliefs and desires, rather than on what it is programmed to do.

Researchers from the Italian Institute of Technology probed the response of study participants to an anthropomorphic robot called iCub.

The participants completed a questionnaire before and after interacting with iCub, that was programmed to act either like a robot or in a more friendly manner.

It was found that those exposed to the robot programmed to act more like a human were more likely to rate the robot’s actions as intentional.

In the study, the researchers had a child-sized humanoid robot complete a series of questionnaires with 28 children aged between eight and 13 to assess mental wellbeing.

They found that the youngsters were willing to confide in the robot, sometimes sharing information that they had not yet shared via online or in-person questionnaires.

The researchers say robots could be a useful addition to traditional methods of mental health assessment, although they are not intended to be a substitute for professional mental health support.

PhD student Nida Itrat Abbasi, the study’s first author, said: ‘Since the robot we use is child-sized, and completely non-threatening, children might see the robot as a confidante – they feel like they won’t get into trouble if they share secrets with it.

‘Other researchers have found that children are more likely to divulge private information – like that they’re being bullied, for example – to a robot than they would be to an adult.’

Each child took part in a one-to-one, 45-minute session with a Nao robot – a humanoid robot about 60 centimetres tall.

A parent or guardian, and members of the research team, observed from an adjacent room.

Before each session, children and their parent or guardian completed standard online questionnaires to assess the child’s mental wellbeing.

Participants interacted with the robot throughout the session by speaking with it, or by touching sensors on the robot’s hands and feet.

Study participants all said they enjoyed talking with the robot.

Some shared information with the robot that they had not shared either in person or on the online questionnaire.

Professor Hatice Gunes, who leads the Affective Intelligence and Robotics Laboratory in Cambridge’s Department of Computer Science and Technology, has been studying how socially assistive robots can be used as mental wellbeing coaches for adults. 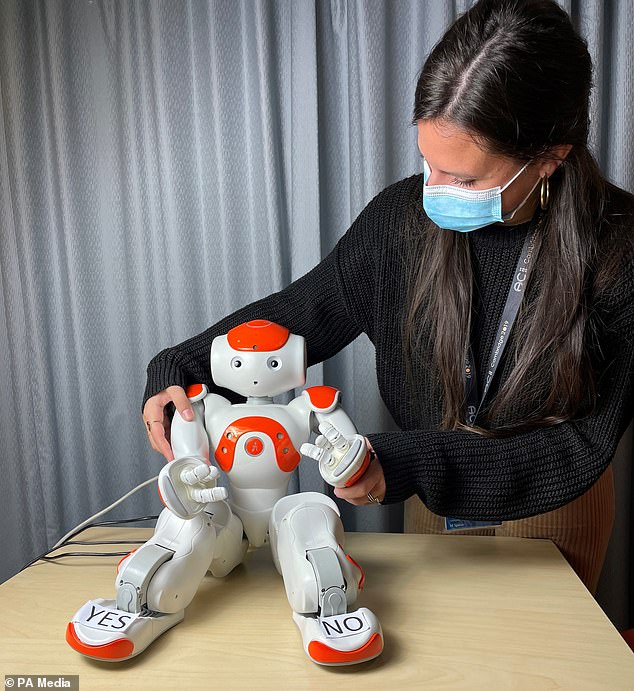 Children interacted with the robot by speaking with it, or by touching sensors on the robot´s hands and feet

In recent years, she has also been studying how they may be beneficial to children.

‘After I became a mother, I was much more interested in how children express themselves as they grow, and how that might overlap with my work in robotics,’ she said.

‘Children are quite tactile, and they’re drawn to technology.

‘If they’re using a screen-based tool, they’re withdrawn from the physical world.

‘But robots are perfect because they’re in the physical world – they’re more interactive, so the children are more engaged.’

Co-author Dr Micol Spitale said: ‘We don’t have any intention of replacing psychologists or other mental health professionals with robots, since their expertise far surpasses anything a robot can do.

‘However, our work suggests that robots could be a useful tool in helping children to open up and share things they might not be comfortable sharing at first.’

The researchers hope to expand their survey in future, by including more participants and following them over time.

They are also investigating whether similar results could be achieved if children interact with the robot via video chat.

The results will be presented at the 31st Institute of Electrical and Electronics Engineers (IEEE) International Conference on Robot and Human Interactive Communication (RO-MAN) in Naples, Italy on Thursday.