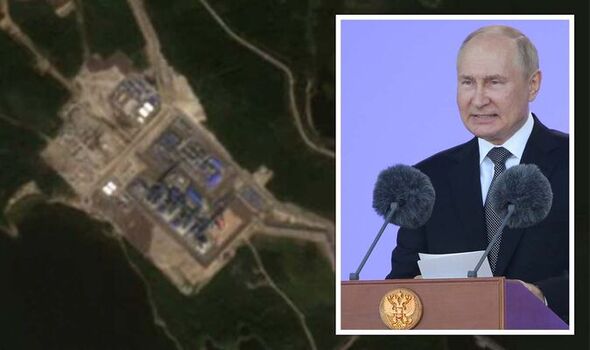 Analysts claim that the huge volumes of gas being burnt each day amount to around 4.34 million cubic metres, gas which under normal circumstances would have been sent to Europe.

The giant flame was spotted at the liquified natural gas (LNG) plant at Portovaya, northwest of St Petersburg, not far from the compressor station where Nord Stream 1 begins.

Nord Stream 1 is a major pipeline which usually sends significant volumes of Russian gas to Germany via the Baltic Sea.

But supplies travelling through this pipeline have been slashed since mid-July, sparking chaos in Germany which is getting pushed to the brink of a recession as a result.

And despite slashing Germany’s supplies, Germany’s ambassador to the UK Miguel Berger has claimed Russia was they couldn’t sell it elsewhere.

He told the BBC that “they don’t have other places where they can sell their gas, so they have to burn it” and added that the gas cut is having a “strong effect on the Russian economy”.

Dr Jessica McCarty, an expert on satellite data from Miami University in Ohio, said: “I’ve never seen an LNG plant flare so much.

“Starting around June, we saw this huge peak, and it just didn’t go away. It’s stayed very anomalously high.”

The flames were reportedly first spotted on June 17, just three days after pipeline gas flows were slashed by 40 percent, and later by a third.

Data from NASA’s Fire Information for Resource Management Systems (FIRMS) has revealed that larger fires have been continuously spotted at the Nord Stream 1 station ever since supplies to Germany had first been cut.

Sindre Knutsson from Rystad Energy, said: “While the exact reasons for the flaring are unknown, the volumes, emissions and location of the flare are a visible reminder of Russia’s dominance in Europe’s energy markets.

“There could not be a clearer signal – Russia can bring energy prices down tomorrow. This is gas that would otherwise have been exported via Nord Stream 1 or alternatives.”