Is Amazon about to buy EA? Report claims the tech giant has made an offer for the FIFA game publisher to broaden its push into sports

Amazon has reportedly made a bid to buy Electronic Arts (EA), the US video game company behind the hugely successful FIFA series.

According to Stockholm-based gaming content agency GLHF, Amazon will confirm its bid to take over the gaming firm on Friday.

Rumours have circulated since the spring that EA had been looking to be acquired by a large company, including Disney, Apple or Amazon.

The rumoured takeover was first reported by USA Today, which said ‘Amazon has finally made an offer’, citing GLHF as its source.

Such a purchase could broaden Amazon’s push into sports, following its purchase of live streaming rights of NFL and the Premier League on its Prime platform.

However, the rumour of a bid has been quashed by CNBC, which suggested there has been no such offer from Amazon. 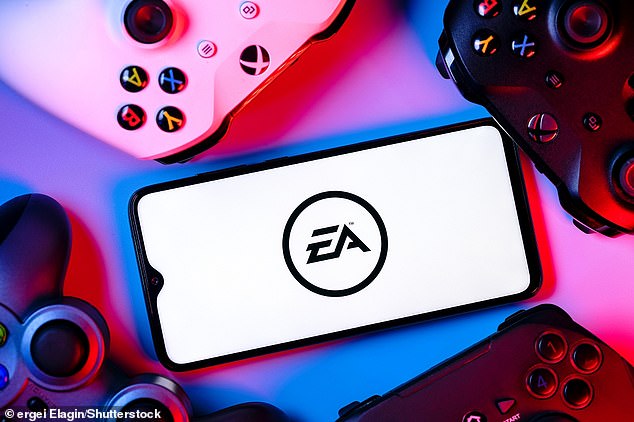 Amazon has reportedly made a bid to buy Electronic Arts, the US video game company behind the hugely successful FIFA series (file photo)

Speaking on air on Friday, CNBC analyst and journalist David Faber said: ‘I’ve talked to some people who would actually know if there was something going on, and they say there’s nothing going on.

‘EA definitely has been out there a bit in the past at least considering what it might do. You could imagine Amazon might have some interest. [But] this is not going to happen today.’

EA replied: ‘We don’t comment on rumors and speculation relating to M&A [mergers and acquisitions].’

EA shares had jumped 15 per cent in premarket trading after the report from USA Today on Amazon’s supposed takeover bid, although they later fell.

EA is probably best known for its FIFA football series, which has sold more than 325 million units since the first FIFA game, ‘FIFA International Soccer’, was released in 1993.

EA’s FIFA games have been released annually for nearly 30 years thanks to an official partnership with world soccer governing body FIFA.

However, in May, it was announced that the long-standing partnership is set to come to an end next year, meaning this year’s installment of FIFA will be the last.

EA will keep releasing its own football series, titled EA Sports FC, while FIFA reportedly intends to enter a partnership with a new developer.

The decision came after months of tense negotiations as FIFA officials reportedly demanded $1 billion for its licensing rights from EA.

The final FIFA game, FIFA 23, will be released on September 30, and will be the first to introduce women’s club football to the gaming options. 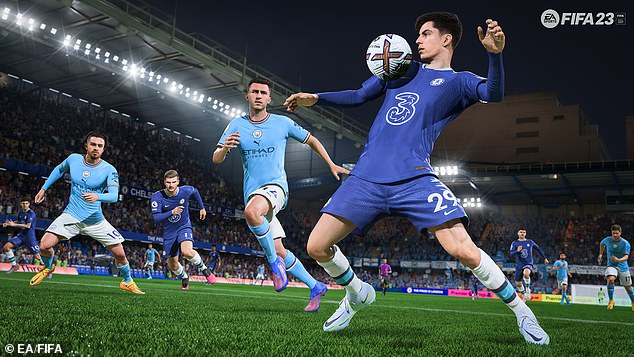 EA will keep releasing its own football series, titled EA Sports FC, while FIFA reportedly intends to enter a partnership with a new developer. Pictured, a promo shot from FIFA 23 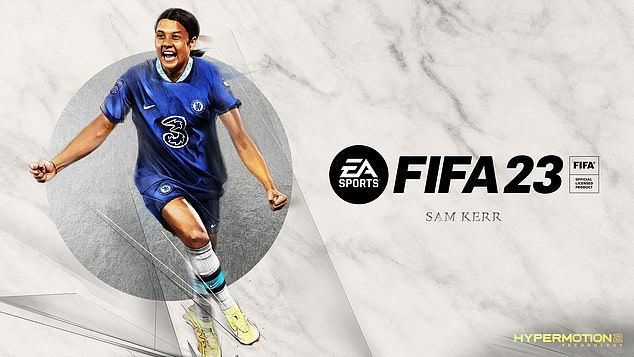 FIFA 23, to be released on September 30, will be the first to introduce women’s club football to the gaming options. Pictured, a FIFA 23 promo shot featuring Chelsea striker Sam Kerr

EA, headquartered in Redwood City, California, was founded in May 1982 by Apple employee Trip Hawkins.

It’s since created multiple video game franchises that have sold many millions of units, including The Sims, Medal of Honor and Apex Legends, as well as FIFA.

But the global gaming industry is said to be struggling as the surge in demand seen at the height of the pandemic cools down.

Earlier this month, EA’s chief financial officer Chris Suh said the company was not ‘completely immune’ to recession after revealing its quarterly results.

Amazon, meanwhile, has hit the acquisition trail as it looks to diversify its business beyond online shopping and cloud storage under its new CEO Andy Jassy.

The company’s recent bids include a $1.7 billion offer for Roomba-maker iRobot Corp and $3.5 billion for primary care provider One Medical.

Amazon has also purchased MGM studios, the maker of ‘Rocky’ and ‘James Bond’, movies for $8 billion.

FIFA games have been released annually for nearly 30 years thanks to EA’s partnership with world soccer governing body FIFA.

The first game in the FIFA football series, ‘FIFA International Soccer’, was  released for the Sega Mega Drive/Genesis console in December 1993 in time for Christmas.

It was the best-selling home video game of 1993 in the UK and was followed by a sequel the following year, FIFA Soccer 95.

Since then, new installments have come every year for multiple consoles, including Sony’s PlayStation, Nintendo’s SNES, Game Boy and Wii, and MIcrosoft’s Xbox.

The game requires players to control all 11 players on a football team in simulations of real matches.

Because the game has an official licence from FIFA – the world governing body of football after which it takes it name – it has licenced logos, teams, players and stadiums for a realistic football experience.

The franchise’s latest release, FIFA 22, was released worldwide in October 2021.

The next installment, FIFA 23, will be released on September 30, and will be the first to introduce women’s club football to the gaming options.

FIFA 23 will also be the last in the series, due to the partnership between FIFA and EA coming to and end.

EA will keep releasing its own football series, titled EA Sports FC, while FIFA reportedly intends to enter a partnership with a new developer.

The FIFA franchise has sold more than 325 million units over its lifetime, according to EA.