First water map of Mars REVEALED: Incredible chart shows the location of ancient aqueous deposits on the Red Planet – and could help NASA choose where to land in the future

While the idea of sending humans to Mars was once confined to science fiction, NASA hopes it could become a reality by the late 2030s.

But one of the key questions we need to resolve before we set off for the Red Planet, is where to land.

Now, scientists from the European Space Agency (ESA) have created the first water map of Mars, based on data from its Mars Express Observatory and NASA’s Mars Reconnaissance Orbiter.

The team hopes the map will change the way we think about Mars’ watery past and help in the decision of where to land on the Red Planet in the future. 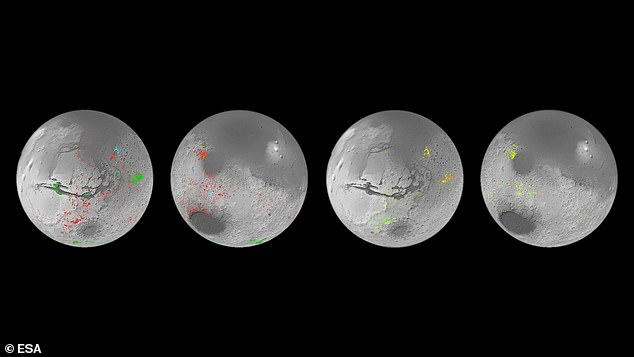 Scientists from the European Space Agency (ESA) have created the first water map of Mars, based on data from its Mars Express Observatory and NASA’s Mars Reconnaissance Orbiter

The map shows the locations and abundances of aqueous minerals on Mars.

These minerals are from rocks that have been chemically altered by water in the past and have typically been transformed into clays and salts.

While you might think that these aqueous minerals would be few and far between, the big surprise is their prevalence on Mars, with the map revealing hundreds of thousands of such areas.

‘This work has now established that when you are studying the ancient terrains in detail, not seeing these minerals is actually the oddity,’ said Dr John Carter from the Institut d’Astrophysique Spatiale.

The big question is now whether this water was persistent, or confined to shorter, more intense episodes.

ESA hopes the map will serve as a better tool for answering this question.

‘I think we have collectively oversimplified Mars,’ said Dr Carter.

Scientists have previously tended to think that only a few types of clay minerals were created on Mars during its wet period.

Then, as water gradually dried up, salts were produced across the planet.

However, the new map shows that the process was likely much more complicated than this.

While many of the salts probably did form later than the clays, the map shows that there are exceptions.

Lunar soil could potentially be converted into rocket fuel to power future missions to Mars, a new study has found.

Analysis of dirt granules brought back by China’s Chang’e 5 spacecraft found that regolith on the moon contains compounds that convert carbon dioxide into oxygen.

The soil is rich in iron and titanium, which work as catalysts under sunlight and could turn carbon dioxide and water released by astronauts’ bodies into oxygen, hydrogen and other useful by-products like methane to power a lunar base.

As liquified oxygen and hydrogen make rocket fuel, it also opens the door for a cost-cutting interplanetary gas station on the moon for trips to the Red Planet and beyond.

‘The evolution from lots of water to no water is not as clear cut as we thought, the water didn’t just stop overnight,’ Dr Carter explained.

‘We see a huge diversity of geological contexts, so that no one process, or simple timeline can explain the evolution of the mineralogy of Mars.

‘That’s the first result of our study. The second is that if you exclude life processes on Earth, Mars exhibits a diversity of mineralogy in geological settings just as Earth does.’

To create the map, ESA used data from various instruments.

The researchers hope the map will prove useful for NASA as it chooses where to land on Mars in the future.

The news comes ahead of NASA’s Artemis I mission, which is set to launch on August 29, paving the way for future missions to the moon and Mars.

‘Artemis I will be an uncrewed flight test that will provide a foundation for human deep space exploration, and demonstrate our commitment and capability to extend human existence to the Moon and beyond,’ NASA explained.

If the Artemis missions are a success, NASA aims to launch astronauts to Mars by the late 2030s or early 2040s.

Mars has become the next giant leap for mankind’s exploration of space.

But before humans get to the red planet, astronauts will take a series of small steps by returning to the moon for a year-long mission.

Details of a the mission in lunar orbit have been unveiled as part of a timeline of events leading to missions to Mars in the 2030s.

Nasa has outlined its four stage plan (pictured) which it hopes will one day allow humans to visit Mars at he Humans to Mars Summit held in Washington DC yesterday. This will entail multiple missions to the moon over coming decades

In May 2017, Greg Williams, deputy associate administrator for policy and plans at Nasa, outlined the space agency’s four stage plan that it hopes will one day allow humans to visit Mars, as well as its expected time-frame.

Phase one and two will involve multiple trips to lunar space, to allow for construction of a habitat which will provide a staging area for the journey.

The last piece of delivered hardware would be the actual Deep Space Transport vehicle that would later be used to carry a crew to Mars.

And a year-long simulation of life on Mars will be conducted in 2027.

Phase three and and four will begin after 2030 and will involve sustained crew expeditions to the Martian system and surface of Mars.