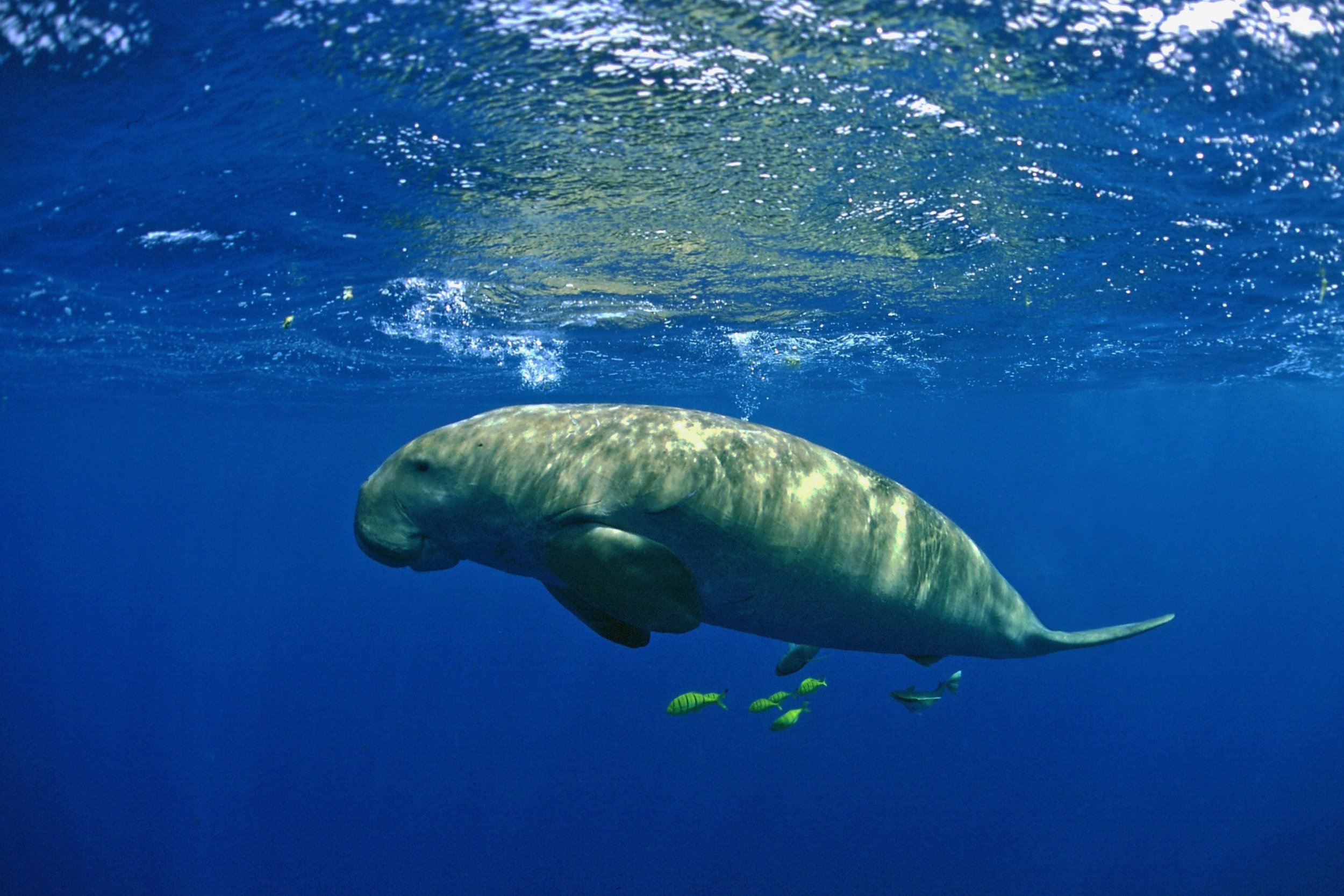 A bizarre ocean creature that inspired stories of mermaids is being driven to extinction, warns a new report.

The dugong – also known as the ‘sea cow’ – has not been seen in Chinese waters since 2008.

It’s half fish and half mammal – with curves that made it resemble a woman to the ancient world’s sex-starved sailors.

The ‘gentle giant’ reaches up to 10 feet long and feeds on seagrass – hence its nickname.

Co-author Professor Samuel Turvey, of the Zoological Society of London (ZSL), said: ‘The likely disappearance of the dugong in China is a devastating loss.

‘Their absence will not only have a knock-on effect on ecosystem function, but also serves as a wake-up call – a sobering reminder that extinctions can occur before effective conservation actions are developed.’

Dugongs are threatened around the world by human activities such as fishing, ship strikes and habitat loss.

Records of dugongs around south east Asia have decreased rapidly from the 1970s onwards.

‘Our new study shows strong evidence of the regional loss of another charismatic aquatic mammal species in China – sadly, once again driven by unsustainable human activity.’

The international team has declared the dugong ‘functionally extinct’ – the first case of its kind of a large mammal in China’s coastal waters.

It makes the outlook grim for the few that survive in the shallows of the Indian and western Pacific Oceans.

Prof Turvey said: ‘The most recent dugong report dated from 2008. Our results show dugongs are now likely to be functionally extinct in China, due to human-caused degradation of seagrass beds and historical hunting.

The study, appearing in the journal Royal Society Open Science, is based on interview surveys in 66 local fishing communities across four provinces along the coast of the South China Sea.

The dugong is the only strictly plant eating marine mammal. It has been classified as a Grade 1 National Key Protected Animal since 1988 by the Chinese State Council.

Dugongs can be found in coastal waters off tropical and sub-tropical countries from East Africa to Vanuatu, and as far north as the southwestern islands of Japan.

But they are globally threatened and listed as Vulnerable by the International Union for Conservation of Nature (IUCN).

ZSL’s EDGE of Existence programme also recognises dugongs as one of the world’s top mammal conservation priorities based on evolutionary history.

Dugongs had been known to frequent southern Chinese waters for many hundreds of years.

The researchers say they would ‘welcome any possible future evidence’ that dugongs might still persist in China.

But the investigations found no recent dugong sightings across their known haunts. The authors recommend the species’ regional status should be reassessed as Critically Endangered (Possibly Extinct).

Dugongs are dependent upon seagrass, a specific marine habitat that is being rapidly degraded by human impacts.

Although seagrass restoration and recovery efforts are a key conservation priority in China, restoration takes time that dugongs may no longer have.

Co author Dr Heidi Ma, of ZSL’s Institute of Zoology, said: ‘Through interview surveys, we gathered valuable information that was previously not available for making evidence-based evaluations of the status of dugongs in the region.

‘This not only demonstrates the usefulness of ecological knowledge for understanding species’ status, but also helps us engage local communities and to investigate possible drivers of wildlife decline and potential solutions for mitigation.’

Steller’s sea cows grew up to 30 feet long and weighed ten tonnes. They died out in the 18th Century as they were sitting targets for harpoon hunters, having no fear of humans.

The species was named after German explorer Georg Steller who first documented its existence during a voyage in 1741.

The last one was killed in 1768, 27 years after it was discovered by modern man. Hunting expeditions were blamed.

The huge animals belonged to a group of mammals known as Sirenia, named after the mermaids of Greek mythology.

Accounts of mermaids go as far back as 1000 BC in Syria. In the mythical telling, the beautiful goddess of fertility Atargatis cast herself into a lake – and transformed into a mermaid.

With major conferences such as CBD COP15 on the horizon, ZSL is calling for world leaders to put nature at the heart of all global decision-making and ensure biodiversity loss is part of wider policy planning.