Aussie farmers HOPPING MAD over source of ‘rabbit plague’: One Englishman’s shipment of 13 rabbits from Somerset to Melbourne in 1859 is to blame for country’s 200 million-strong infestation, study reveals

One Englishman really is to blame for Australia’s uncontrollable rabbit infestation, a new study shows.

Thomas Austin, an English settler in Australia, introduced 24 rabbits to his estate just outside of Melbourne in October 1859, with the intention of using them as hunting targets.

Now, Australia’s population of rabbits is estimated to be around 200 million – and they cause havoc for crop growers and homeowners alike.

Using DNA profiling, researchers have traced the origin of Australia’s invasive rabbit population back to Austin’s family estate and birthplace in Somerset – conclusively squaring the blame at the Englishman.

Rabbits are not native to Australia, but were shipped from England at various points in the 19th century, although Austin’s efforts triggered the nationwide invasion.

They are Australia’s most destructive agricultural and environmental introduced animal pest, costing up to AU$1billion annually.

They cause severe land degradation and soil erosion and threaten the survival of rare and endangered native species, such as the greater bilby and the yellow-footed rock-wallaby. 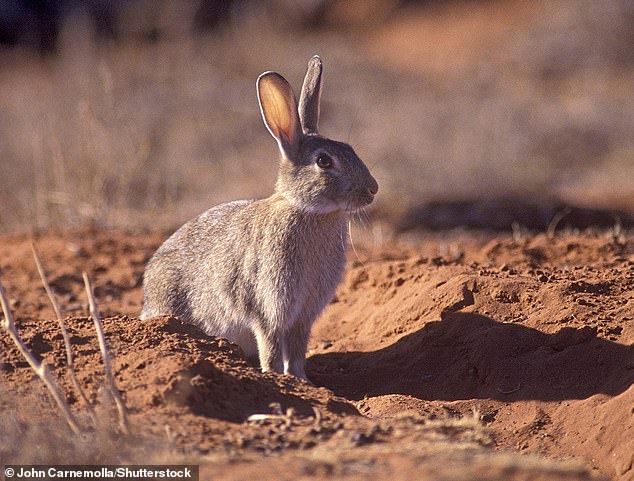 Rabbits are not native to Australia, but were shipped from England at various points in the 19th century. However, it was a single introduction in 1859 that led to rabbits spreading across the whole of Australia. Pictured, a wild rabbit in the Australian outback 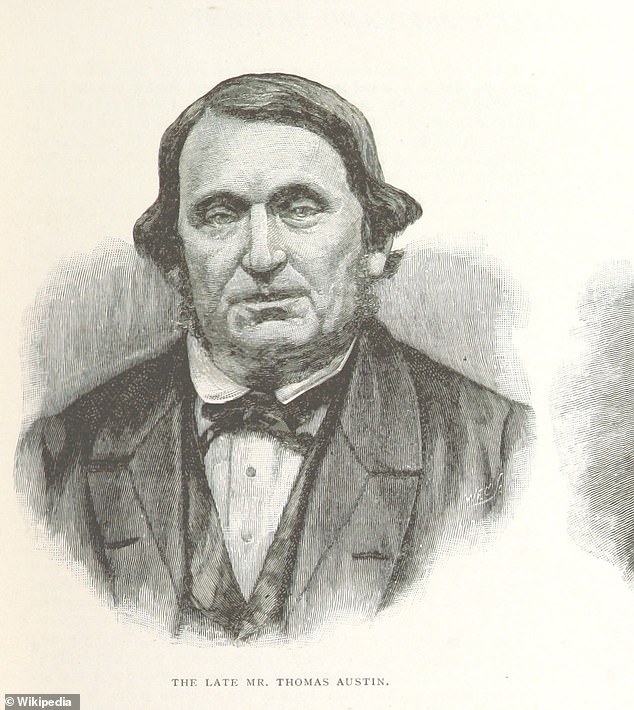 Thomas Austin, an English settler in Australia, introduced 24 breeding rabbits (Oryctolagus cuniculus) on his estate in October 1859 as game for shooting parties

The new study was conducted by an international team led by the University of Cambridge and CIBIO Institute in Portugal.

WHERE DO RABBITS COME FROM?

Rabbits are not native to Australia, but were shipped from England at various points in the 19th century.

Rabbits are not even native to the UK; they were brought from Spain by the Normans in the 12th century to provide food and fur.

For most of its existence, the European rabbit (Oryctolagus cuniculus) was restricted to the Iberian Peninsula and the South of France.

Despite being a key species in their native range, rabbits are considered pests in most introduced locations, responsible for damage to agriculture, habitat degradation, and endangerment of native species.

‘One of the most iconic biological invasions was triggered by a single introduction of rabbits into Australia,’ they say in their paper.

‘Here, we show that despite numerous introductions over a 70-year period, this invasion was triggered by a single release of a few animals that spread thousands of kilometers across the continent.

‘We found genetic support for historical accounts that these were English rabbits imported in 1859 by a settler named Thomas Austin and traced the origin of the invasive population back to his birthplace in England.

‘The colonisation of Australia by the European rabbit is one of the most iconic and devastating biological invasions in recorded history.’

Rabbits were first introduced to mainland Australia when five domestic animals were brought to Sydney on the First Fleet in 1788.

At least 90 subsequent importations would be made before 1859 but none of these populations became invasive.

It wasn’t until 1859 that Australia’s rabbit problem truly started, thanks to the actions of Thomas Austin and his brother, William.

On October 6, 1859, on Thomas’s request, William sent a consignment of wild rabbits – caught on the family’s land in Baltonsborough in Somerset – together with some domestic rabbits, on the ship Lightning.

On Christmas Day that year, 24 of the rabbits arrived in Melbourne and were dispatched to Barwon Park, Thomas’s estate.

In all, 13 animals were sent from England even though 24 arrived in Australia, suggesting that they bred before or during the 80 days of the journey.

The population of rabbits now estimated to be down under is around 200 million – and they cause havoc for crop growers and homeowners alike.

Rabbits are Australia’s most destructive agricultural and environmental introduced animal pest, costing up to AU$1billion annually.

They cause severe land degradation and soil erosion and threaten the survival of many rare and endangered native species, such as the greater bilby, yellow-footed rock-wallaby, southern and northern hairy-nosed wombats, the malleefowl and the plains-wanderer.

For this reason, they’re banned as pets in Queensland, although they’re considered pests in every Australian state and territory.

Despite the construction of rabbit-proof fences, the deliberate introduction of the myxoma virus and other measures, rabbits remain one of the major invasive species in Australia.

Unsurprisingly, they continued to breed, as the saying goes, like rabbits. Within three years, the 1862 Chronicle stated how ‘Austin rabbits’ numbered in the thousands.

By 1865, Austin himself told the Geelong Advertiser he’d killed 20,000 rabbits at his estate, as a statement to the ‘extraordinary fecundity of the English rabbit’.

Within 50 years, rabbits would spread across the entire continent at a rate of more than 60 miles (100km) per year, like a ‘grey blanket’.

It’s still the fastest colonisation rate for an introduced mammal ever recorded.

For their study, the researchers looked at historical records alongside new genetic data collected from 187 European rabbits (Oryctolagus cuniculus).

These rabbits were mostly wild-caught across Australia, Tasmania, New Zealand, Britain and France between 1865 and 2018.

Researchers were able to trace the ancestry of the creatures right back to Baltonsborough, Somerset, where Austin’s family collected the rabbits in 1859.

Recent studies disputed the hypothesis that Australia’s rabbits came from a single origin, instead arguing that invasive rabbits arose from several independent introductions.

However, they did not sample ancestral European and domestic populations, which was crucial to disentangle the source of Australia’s rabbits.

‘Our findings show that despite the numerous introductions across Australia, it was a single batch of English rabbits that triggered this devastating biological invasion, the effects of which are still being felt today,’ said lead author Dr Joel Alves at the University of Oxford and CIBIO Institute. 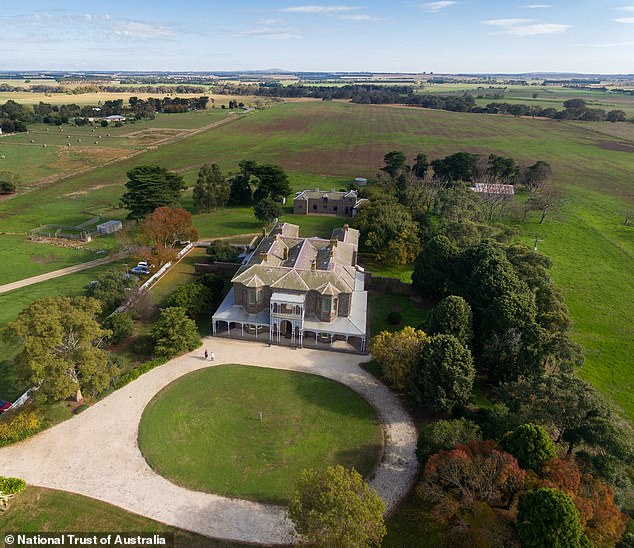 The birthplace of Australia’s rabbit infestation: On Christmas Day 1859, 24 of the rabbits arrived in Melbourne and were dispatched to Barwon Park, Thomas’s estate (pictured) in Victoria, Australia

‘This serves as a reminder that the actions of just one person, or a few people, can have a devastating environmental impact.’

The researchers also found that as the rabbits moved further away from Barwon Park, genetic diversity declined and rare genetic variants which occur in rapidly growing populations became more frequent.

As to why Austin’s rabbits thrived while previous populations didn’t, it’s less certain to the researchers, although it may be due to the fact that Austin’s original sample of 13 rabbits were predominantly wild.

The rabbits introduced to Australia before 1859 were often described as displaying tameness, fancy coat colours and floppy ears, traits associated with domestic breeds but normally absent in wild animals.

‘The reason for this is that when animals are domesticated humans select for traits such as tameness and the ability to put on body-mass which may be counter-productive for survival in the wild.

‘Also, when animals are domesticated there is no selection to avoid predators or survive on nutrient poor diets.’ 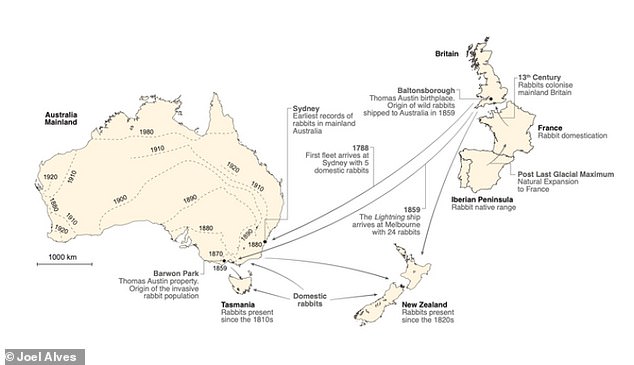 The colonisation route of the European rabbit from Iberian Peninsula to Australia and New Zealand.

The new study’s genetic findings prove that at least some of the animals were indeed wild – something already corroborated by recollections from Joan Palmer, William Austin’s granddaughter.

In the 20th century, Joan Palmer recalled that her grandfather had found it difficult to source the animals for Thomas ‘as wild rabbits were by no means common round Baltonsborough’.

She said in her 1993 book ‘Memories of a Riverina Childhood: ‘It was only with great difficulty that he managed to get six.

‘These were half-grown specimens taken from their nests and tamed.

‘To make up the number he bought seven grey rabbits that the villagers had kept in hutches, either as pets or to eat.’

The study has been published in the journal Proceedings of the National Academy of Sciences.

A retired property owner in Australia is hopping mad after a ‘rabbit plague’ inundated his yard and caused thousands of dollars in damage.

Colin Fitches, who resides in Victoria’s Mornington Peninsula, has been battling the out-of-control bunnies for about six months but the local council and the Department of Agriculture say there’s nothing they can do about it.

On top of ruining his water tank, the floppy-eared troublemakers have also destroyed his pristine garden and prized fruit trees.

‘A bloody plague of rabbits has taken over my property!’ the pensioner said.

‘When the trees drop fruit, it’s like a party for them,’ Mr Fitches told A Current Affair.

The Department of Agriculture recommended he put up a rabbit proof fence on all sides of his property to keep the intruders at bay.

But despite the $20,000 investment they are still forcing their way inside.