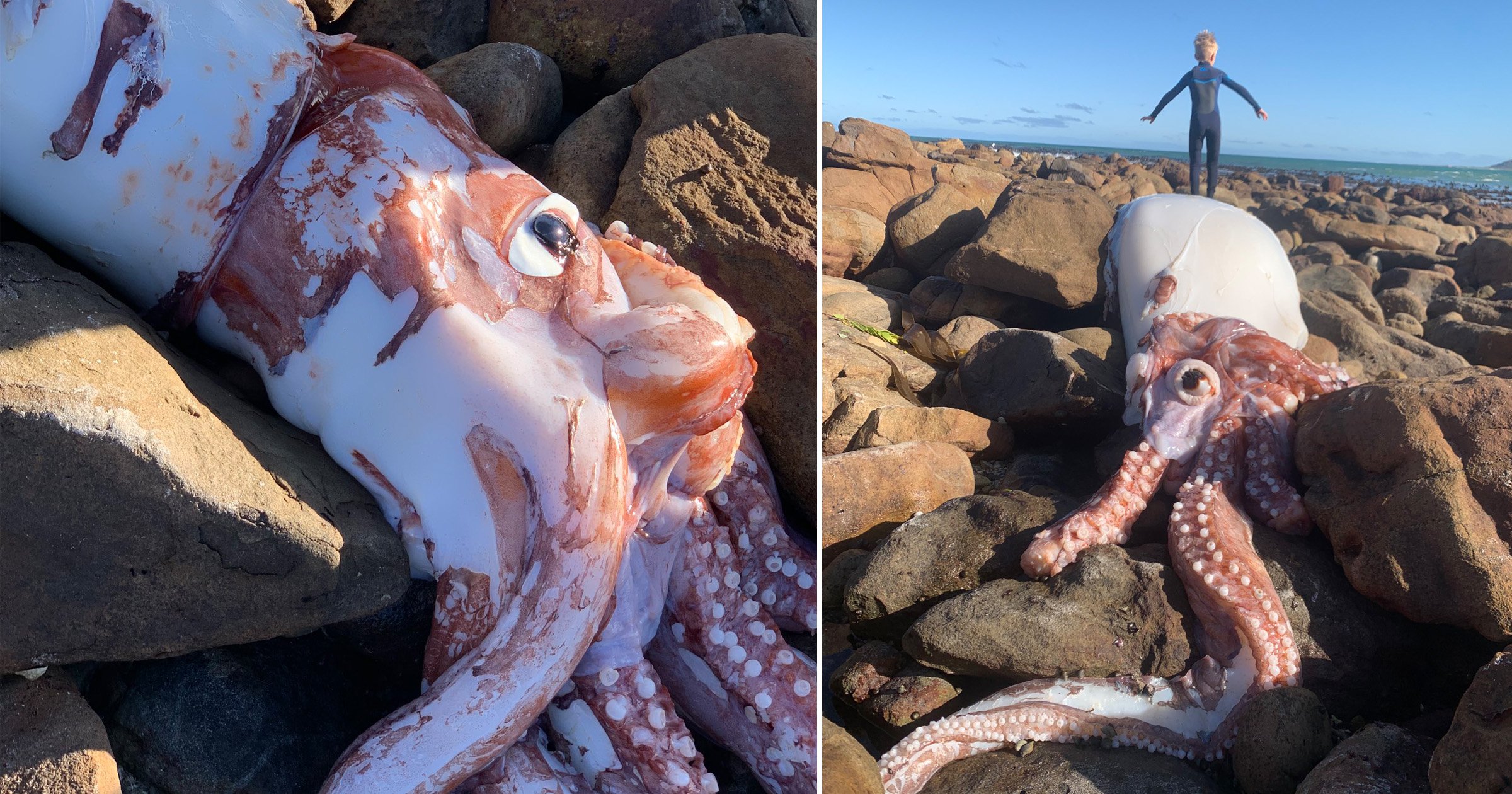 A 14-foot-long carcass of a giant squid washed onto the shore of Scarborough Beach in Cape Town, South Africa.

The squid that washed onto that beach this week seemed to be a giant squid, scientifically known as an Architeuthis dux, a species of deep-ocean dwelling squid.

‘Although other large squids exist, I am fairly certain this is a true giant squid,’ Mike Vecchione, a National Oceanic and Atmospheric Administration invertebrate zoologist told Live Science.

The creature spotted last week, was the second giant squid to crop up on a beach in the region this year, according to South African news site news24.

The cause of death of the cephalopod is unclear but scientists guess it could be due to being struck by a ship propeller.

‘But this is difficult to prove without witnesses,’ Dylan Clarke, a marine scientist and curator at Iziko South African Museum, told news24.

Giant squids are mostly seen on the shores of New Zealand and Pacific islands, on the east and west sides of the North Atlantic, and in the South Atlantic along the African coast.

Officials gathered tissue samples from the squid carcass on Scarborough Beach, and these will soon be examined by researchers at the Iziko South African Museum, Gregg Oelofse, the City of Cape Town coastal manager, told news24.

‘The availability of information on giant squids is relatively poor and is either based on dead or dying animals that have been washed ashore or captured in commercial trawl nets,’ Clarke told news24.

The deep-sea monsters had never been photographed alive until 2002 and were only caught on camera for the first time in 2006.

Thanks to their elusive nature, the creatures are surrounded by legend and are thought to have inspired stories of the Kraken – a mythical sea monster which is said to have preyed on ships.

Giant squid are capable of growing up to 43 feet long and may weigh up to a tonne but because they are so elusive, most of what scientists know about them has been learned from the carcasses of dead squid washed up on beaches.

What are giant squid?

Very little is known about giant squid because they live in some of the most inhospitable and deepest parts of the ocean.

Giant squid are the largest invertebrates on the planet and have been found in all of the world’s oceans.

They have eight legs and two long feeding tentacles which they use to catch prey.

The largest specimen ever recorded was 59ft long and weighed nearly a tonne. The creatures move through the ocean by sucking water in through their mantle before forcing it out through the back of their bodies.

Along with their cousin, the Colossal Squid, giant squid have the biggest eyes in the animal kingdom.

Their eyes can measure up to 10 inches in diameter and help them to catch prey in the depths of the ocean.

Giant squid survive on a diet of fish, shrimp and other smaller squids with some scientists suggesting they may also be partial to the occasional baby whale.