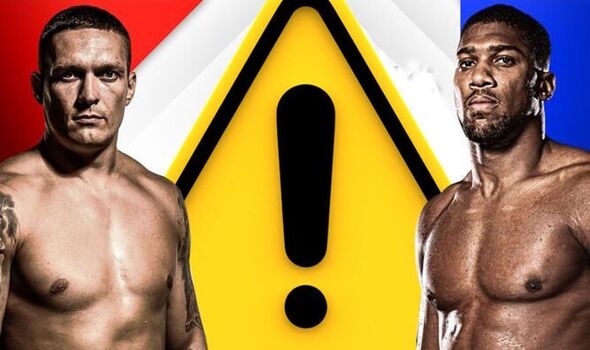 Millions of boxing fans will be tuning into tonight’s clash between Anthony Joshua and Oleksandr Usyk as the heavyweights battle it out under the bright lights of the Abdullah Sports City in Jeddah, Saudi Arabia. It’s a huge night of boxing with Joshua looking to take revenge after his shock defeat to Usyk last year in front of his home crowd at Wembley.

It’s a must-watch brawl and it’s only officially available via Sky with the firm securing full rights via its premium Box Office service.

It costs £26.90 to gain access but it could be worth paying that price rather than trying to stream things for free via the web.

A new warning has been issued by the team at Opentext Security Solutions which says that many of the free streaming sites that continue to pop up all over the web are brimming with malicious content that can leave devices full of data-stealing malware.

Along with users exposing themselves to online fraud, dangerous scams and viruses the security firm’s research has also revealed that the vast majority of sports streaming websites are also filled with explicit and extreme pop-ups that can bombard visitors when they load up the page.

Joshua and Usyk hold a press conference ahead of rematch

If that wasn’t bad enough, the security team also discovered dangerous banking trojans were widely found on these websites with users attacked by simply clicking on an ‘unmute’ button.

This then automatically downloads a piece of software that hackers use to access banking details and personal information.

This year’s research also found numerous examples of explicit content being hosted on illegal streaming sites. This explicit content was extreme and a real risk to families who might share devices with children in their households.

Even if you don’t stumble across malware it’s likely that you won’t find the fight either.

Most free online platforms may advertise the fight but users are often bounced around numerous dodgy sites, without ever actually finding what they are looking for.

Speaking about the threat, Kelvin Murray, Senior Threat Researcher at Opentext Security Solutions, said: “These illegal streaming sites are often run by criminal enterprises to gain users’ personal data and sell them on. There is no safe way to use them without putting yourself at risk. As the people who run these sites become savvier, the scams that they employ to trick users into giving up their data will be harder to spot. Therefore, we recommend avoiding these types of websites and not putting yourself in danger.”

And Kieron Sharp, CEO at FACT, added: “It’s clear from this report that users of illicit streaming services are putting themselves and their families at risk of serious harm. Viewing content illegally puts users’ data at significant risk from hackers and organised criminals and, worryingly, exposes children to explicit content. To protect our children as well as our data, audiences must watch content only through the legal providers.”