Friar muck! Medieval friars were twice as likely to be riddled with intestinal parasites as townspeople because they fertilised their gardens with human FAECES, study claims

Medieval friars were nearly twice as likely as townspeople to be infected by intestinal parasites, new analysis of remains found in Cambridge shows.

This is despite most Augustinian monasteries of the period having latrine blocks and hand-washing facilities, unlike the houses of ordinary working people.

Experts said the difference in parasitic infection may be down to monks manuring crops in friary gardens with their own faeces, or purchasing fertiliser containing human or pig excrement.

The study, carried out by researchers from the University of Cambridge, is the first to compare parasite prevalence in people from the same medieval community who were living different lifestyles, and so might have differed in their infection risk.

The population of medieval Cambridge was made up of residents of monasteries, friaries and nunneries of various major Christian orders, along with merchants, traders, craftsmen, labourers, farmers, and staff and students at the early university.

Cambridge archaeologists investigated samples of soil taken from around the pelvises of adult remains from the former cemetery of All Saints by the Castle parish church, as well as from the grounds where the city’s Augustinian Friary once stood. 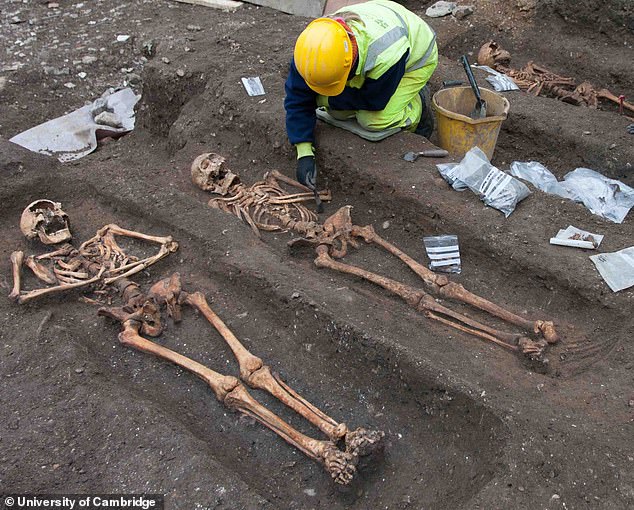 Mucky: Medieval friars were nearly twice as likely as townspeople to be infected by intestinal parasites, new analysis of remains found in Cambridge (pictured) shows 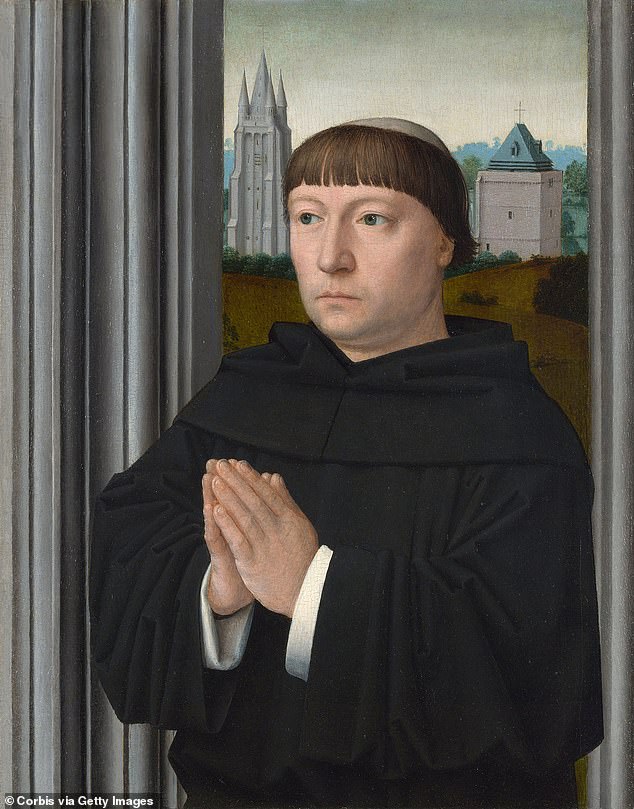 Experts said the difference in parasitic infection may be down to Augustinian monks manuring crops in friary gardens with their own faeces, or purchasing fertiliser containing human or pig excrement

Parasitic roundworms may have infested the guts of one-in-four people living in Europe during the Middle Ages, a separate study of hundreds of grave samples found.

The worms — known to experts as helminths, and include whip- and tapeworms — feed by stealing nutrients from their hosts, which can lead to weakness and disease.

According to the researchers from the University of Oxford, the findings of the study could help fight worm infections in countries where such remain endemic today.

While no longer endemic in Europe, helminths are estimated to infect some 1.5 billion people across the globe today.

The parasitic worms spread between hosts their via their eggs, which leave the body within faeces and can contaminate soil and water.

Their impact can range from only mild  symptoms to chronic malnutrition and physical impairment — with the latter cases more common among infected children.

In their study, infectious disease expert Adrian Smith of the University of Oxford and colleagues took samples of human pelvises from 589 graves buried across seven different European sites that dated back to between the years 680–1700.

Of these sites, two were in Germany, two in the Czech Republic, while the remainder were in the UK — and included Worcester Cathedral, the former Haymarket in York and Stoke Quay in Ipswich.

Most of the parish church burials date from the 12-14th century, and those interred within were primarily of a lower socio-economic status, mainly agricultural workers.

The Augustinian friary in Cambridge was an international study house, known as a studium generale, where clergy from across Britain and Europe would come to read manuscripts.

It was founded in the 1280s and lasted until 1538 before suffering the fate of most English monasteries — closed or destroyed as part of Henry VIII’s break with the Roman Church.

Researchers tested 19 monks from the friary grounds and 25 locals from All Saints cemetery.

They found that 11 of the friars (58 per cent) were infected with worms, compared with just eight of the general townspeople (32 per cent).

They say these rates are likely the minimum, and that actual numbers of infections would have been higher, but some traces of worm eggs in the pelvic sediment would have been destroyed over time by fungi and insects.

The 32 per cent prevalence of parasites among townspeople matches studies of medieval burials in other European countries, suggesting this is not particularly low — but rather the infection rates in the monastery were remarkably high.

‘The friars of medieval Cambridge appear to have been riddled with parasites,’ said study lead author Dr Piers Mitchell from Cambridge’s Department of Archaeology.

‘This is the first time anyone has attempted to work out how common parasites were in people following different lifestyles in the same medieval town.’

Cambridge researcher Tianyi Wang, who did the microscopy to spot the parasite eggs, said: ‘Roundworm was the most common infection, but we found evidence for whipworm infection as well.

‘These are both spread by poor sanitation.’

Standard sanitation in medieval towns relied on the cesspit toilet — holes in the ground used for faeces and household waste.

In monasteries, however, running water systems were a common feature – including to rinse out the latrine – although that has yet to be confirmed at the Cambridge site, which is only partly excavated.

Not all people buried in Augustinian friaries were actually clergy, as wealthy people from the town could pay to be interred there. However, the team could tell which graves belonged to friars from the remains of their clothing.

‘The friars were buried wearing the belts they wore as standard clothing of the order, and we could see the metal buckles at excavation,’ said co-author Craig Cessford of the Cambridge Archaeological Unit.

As roundworm and whipworm are spread by poor sanitation, researchers argue that the difference in infection rates between the friars and the general population must have been due to how each group dealt with their human waste.

‘One possibility is that the friars manured their vegetable gardens with human faeces, not unusual in the medieval period, and this may have led to repeated infection with the worms,’ said Dr Mitchell.

Medieval records reveal how Cambridge residents may have understood parasites such as roundworm and whipworm.

John Stockton, a medical practitioner in Cambridge who died in 1361, left a manuscript to Peterhouse college that included a section on De Lumbricis (‘on worms’). 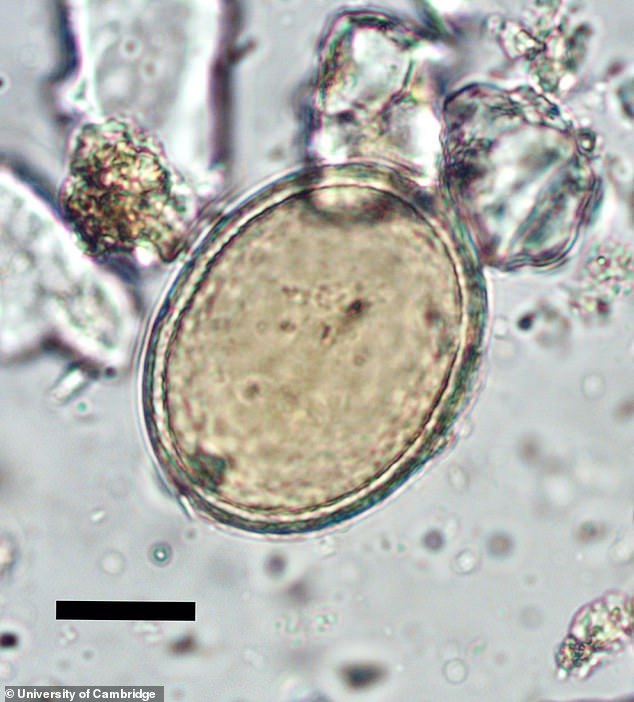 Theory: As roundworm (pictured) and whipworm are spread by poor sanitation, researchers argue that the difference in infection rates between the friars and the general population must have been due to how each group dealt with their human waste 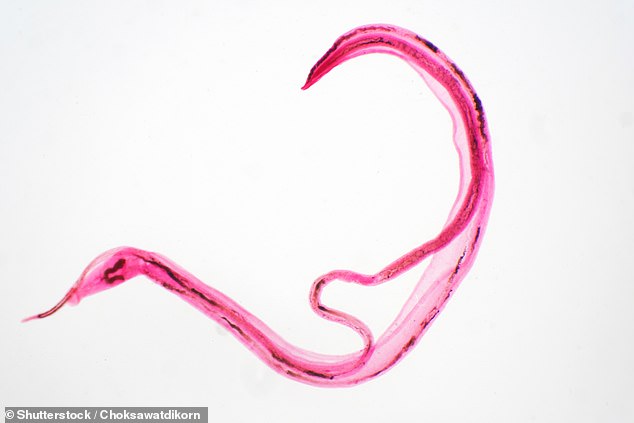 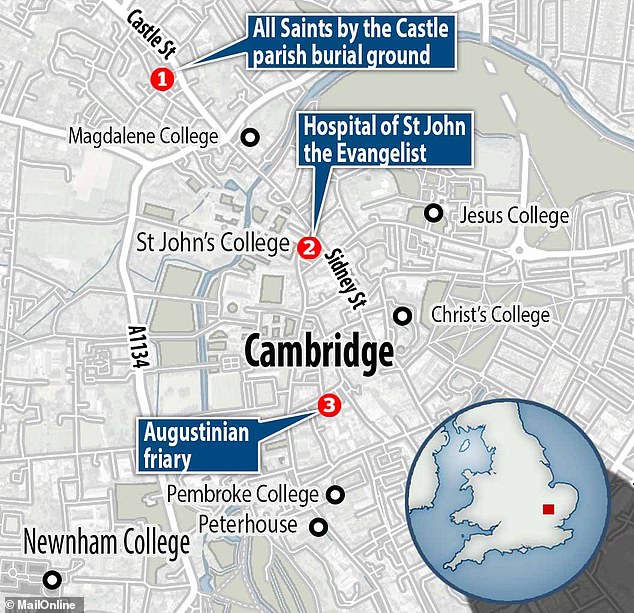 Cambridge archaeologists investigated samples of soil taken from around the pelvises of adult remains from the former cemetery of All Saints by the Castle parish church, as well as from the grounds where the city’s Augustinian Friary once stood

It notes that intestinal worms are generated by excess of various kinds of phlegm: ‘Long round worms form from an excess of salt phlegm, short round worms from sour phlegm, while short and broad worms came from natural or sweet phlegm.’

The text prescribes ‘bitter medicinal plants’ such as aloe and wormwood, but recommends they are disguised with ‘honey or other sweet things’ to help the medicine go down.

Another text – Tabula medicine – found favour with leading Cambridge doctors of the 15th century. It suggests remedies as recommended by individual Franciscan monks, such as Symon Welles, who advocated mixing a powder made from moles into a curative drink.

Overall, those buried in medieval England’s monasteries had lived longer than those in parish cemeteries, according to previous research, perhaps due to a more nourishing diet, a luxury of wealth.

The new study has been published in the International Journal of Paleopathology.

During the 14th Century, Britain was in the depths of the Dark Ages.

Child mortality was high, up to a third of all children did not survive past the age of five due to illness, disease and poor medical knowledge.

Up to 20 per cent of women would die during child birth or because of post-birth infections.

If a person survived a risky childhood and lived in a time without war, the average life expectancy peaked at around 40-45 years of age.

The House of Plantagenet were the royals that oversaw the entire century; from Charles III through to the deposition of Richard II in 1399.

In the middle of the century, a four year span between 1347 to 1351 saw one of the worst pandemics of all time – The Black Death.

It killed an estimated 200 million people – between 30 and 60 per cent of the total European population.

The Oriental rat flea was infected with the Yersinia pestis bacterium which spread the plague through the dirty streets and villages that were so popular during this era as hygiene and germs were not understood.

As well as one of the worst cases of diseases in human history which killed millions of people, scores of people perished due to a lack of food thanks to The Great Famine which spanned from 1315 to 1317.

Starvation accounted for millions of death and a rise in crime, cannibalism and infanticide during this time.

If childbirth, diseases, plague or starvation didn’t cause a premature death many people met their end in a more violent manner as conflicts were commonplace.

The Hundred Years’ War (which lasted 116 years from 1337 to 1453) was a series of conflicts waged between the kingdoms of England and France over the ‘rightful’ succession to the French throne.

In 1381, the working-class people snapped back at the affluent rulers in the ‘Great Rising’ or the ‘Peasants revolt’ in which 1,500 rebels died in protest against poor living conditions and increasing taxes.