The natural phenomenon was filmed ripping through the Gulf of Mexico off the coast of Destin, Florida – looking like a scene from a Hollywood film.

Sparked by huge storms flowing over the gulf, the gigantic column of water and air was spotted at around 7am local time, surrounded by ominous black clouds.

The funnels have been referred to as tornadoes on water due to their similarity to land-based twisters. In fact, a waterspout is a spinning column of air sucking up water from the sea and connecting it to the clouds above.

In this case, though, the comparison could be apt. 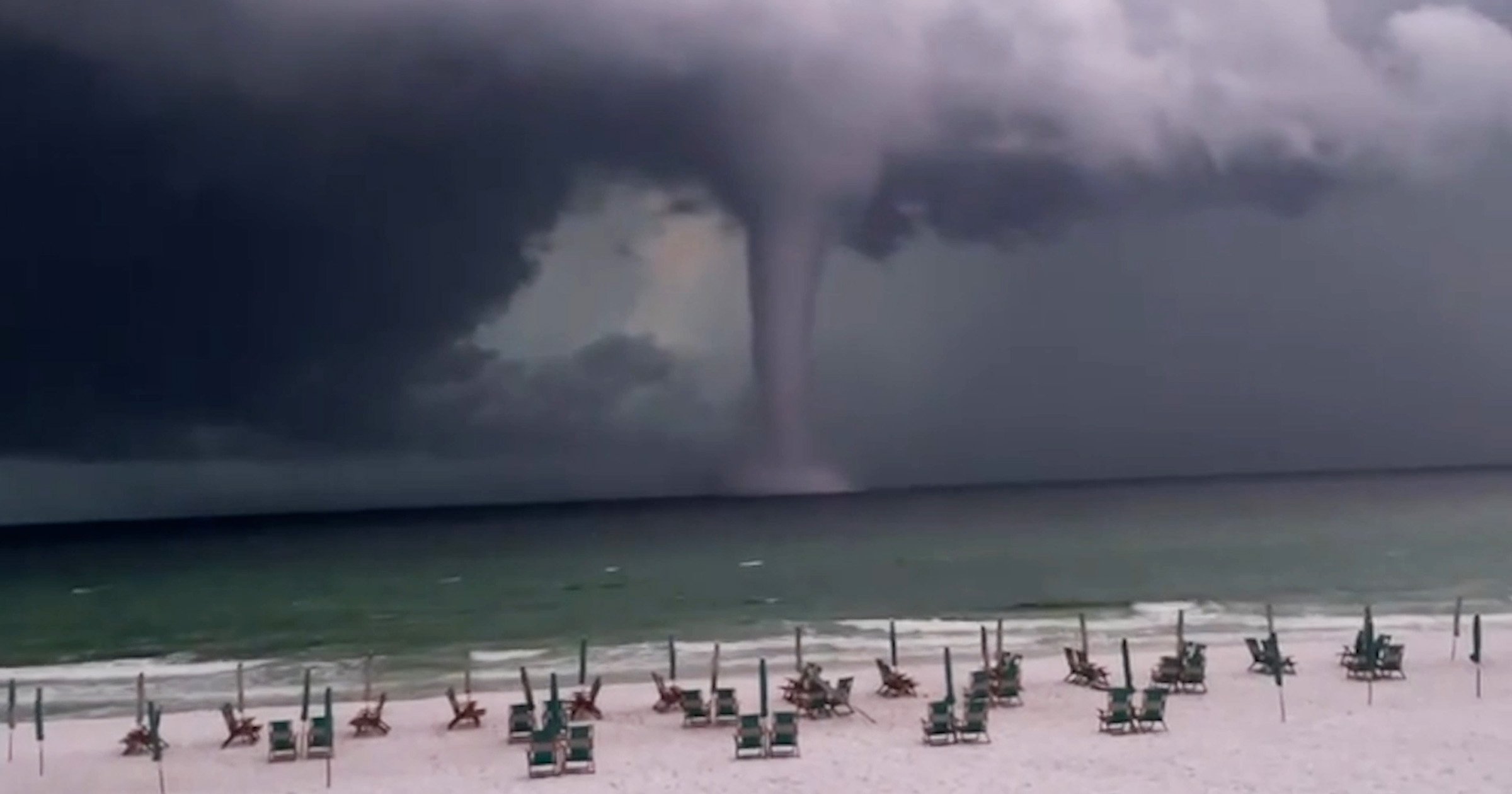 ‘It looks like this was a legitimate tornado over water formed by a supercell thunderstorm, not a weak waterspout spun up from a rain shower,’ commented AccuWeather’s Jesse Ferrell.

This is, apparently, the fifth waterspout reported by the National Weather Service off the Florida Panhandle this summer.

It’s not known how often waterspouts actually do occur as most of them go unobserved and unreported.

How does a waterspout occur?

Waterspouts occur when winds blowing in two different directions run into each other.

Dean Narramore, a senior meteorologist at the Australian Bureau of Meteorology explains the phenomenon in an in-depth piece for The Conversation.

He says the point at which the two winds meet (called a ‘convergence line’) contains a lot of rotating air near the surface. If this happens over water, it sucks the liquid up.

‘The collision of the two winds makes air move upwards because it has nowhere else to go. This rising air carries water vapour high into the sky where it creates rain showers, storms and cumulus clouds,’ Narramore writes.

‘As the air rises, it can tilt some of the horizontal spinning air near the surface into the vertical direction. When this vertical spin concentrates at a particular point it starts sucking up water — and you have yourself a waterspout.

‘Because waterspouts form on the line where two winds meet, you sometimes see a line of waterspouts in a row where the spinning low-level air is sucked upwards at a few different points.’

He also suggests that waterspouts are tricky for meteorologists to forecast.

‘Waterspouts look very big and impressive to the casual viewer, but to a meteorologist looking at the world’s weather patterns they are quite small. This makes them very hard to forecast with any level of confidence,’ he wrote.

‘We know the kind of weather conditions that can lead to waterspouts, so if we see those conditions forming we might know there is a chance we’ll see some. But the small scale and short life of waterspouts mean forecasting the location or timing is almost impossible.’