China is well known for its futuristic maglev trains, which use electromagnets to propel the vehicles over tracks at high speeds.

Now the country has unveiled its first suspended maglev line built with permanent magnets, which engineers claim can keep a ‘sky train’ afloat even without a power supply.

The 2,600ft experimental track, known as the Red Rail, is located in Xingguo county, Jiangxi province, in southern China.

It uses powerful magnets to produce a constantly repelling force strong enough to lift a train with 88 passengers into the air, according to a report in the South China Morning Post.

Unlike most existing maglev lines, the suspended rail operates about 33 feet above the ground. There is no physical contact with the rail as the train moves beneath it silently at speeds of up to 50mph. 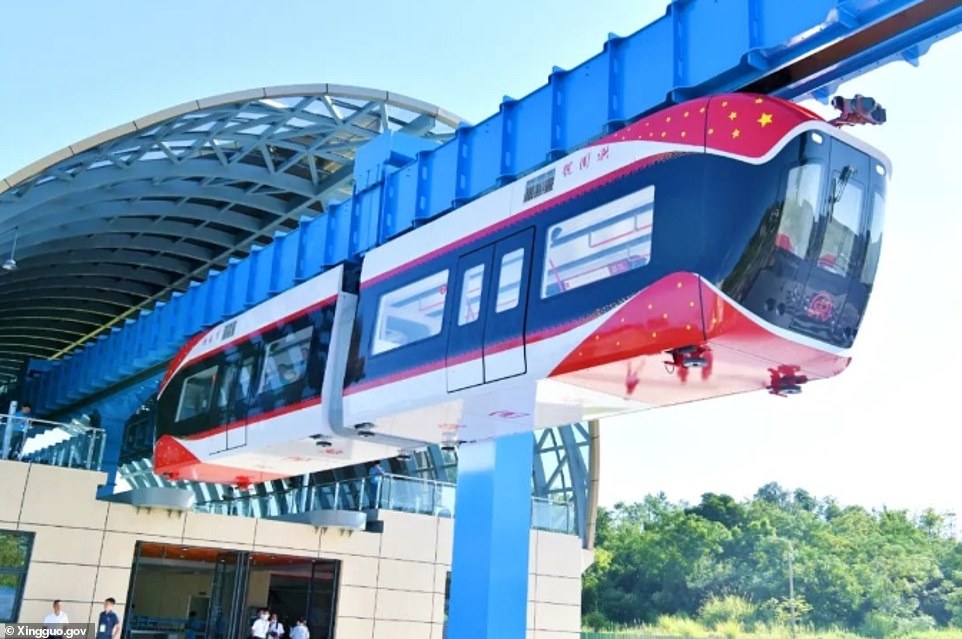 China has unveiled its first suspended maglev line built with permanent magnets, which engineers claim can keep a ‘sky train’ afloat even without a power supply 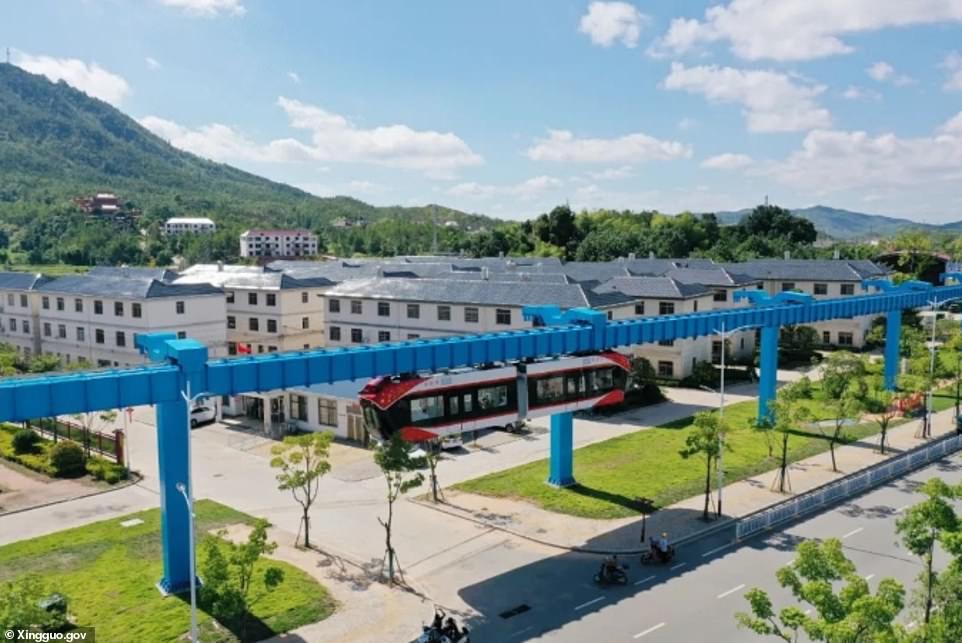 The 2,600ft experimental track, known as the Red Rail, is located in Xingguo county, Jiangxi province, in southern China

What are ‘maglev’ trains?

Maglev trains use magnets to lift the carriages above the track.

This eliminates the need for wheels and, therefore, any incidence of friction, providing faster and quieter service.

Acceleration and deceleration far exceed that of conventional trains.

And maglev also makes for much smoother journeys.

Right now speeds are limited at up to 400 kilometres (250 miles) per hour due to the excessive air resistance encountered at these speeds.

But vacuum tube designs could allow them to travel over seven times faster in the future.

The use of permanent magnets rather than electromagnets, as well as the lack of friction with the track, means that only a small amount of electricity is needed to propel the train.

The track generates much less electromagnetic radiation than traditional maglev lines, which can affect the environment and health of people living nearby.

It is also much cheaper to build, with construction costing only about a tenth of that needed to build a subway, according to researchers at Jiangxi University of Science and Technology.

The technological feat is possible due to an abundance of rare earth elements in China, which are needed to make the train’s permanent magnets.

Adding rare earth elements to magnets significantly increases their lifespan. Neodymium, for instance, can reduce the loss of magnetism to less than 5 per cent in a century.

China is home to nearly 40 per cent of the entire world’s known reserves of rare earth elements – twice as much as its neighbour Vietnam in second place.

It also mines far more of these metals than any other country – with just six state-run Chinese companies producing 85 per cent of the world’s refined rare earths in 2020.

Local transport authorities are currently testing Red Rail on the half-mile stretch of track in Xingguo, but are planning to increase this to 4.7 miles when initial tests are complete.

The maximum speed of most domestic underground lines is generally capped at 50mph but a permanent magnet maglev train, driven entirely by AI, could reportedly reach speeds of up to 75mph.

Dubbed the ‘super bullet maglev train’, it boasts more than twice the speed of the Eurostar fleet and could cover the distance between London and Paris in 47 minutes with its maximum speed.

It uses high-temperature superconducting (HTS) maglev technology, different from the low-temperature technology employed by Germany and Japan in their maglev trains, according to experts from Southwest Jiaotong University.

The team claims that the Chinese version is more lightweight with a simpler structure. It is also cheaper to manufacture and operate.

The engineers consider the HTS technology more suitable for the futuristic ‘vacuum transportation’, which could see ultra-high-speed maglev trains zipping in vacuum tubes in speeds over 1,000 kilometres (621 miles) per hour. 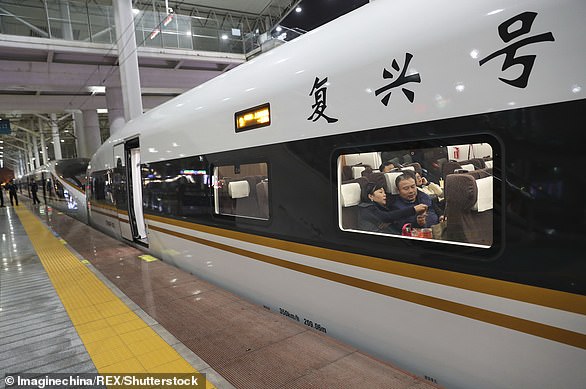 Passengers board a ‘Fuxing’ high-speed bullet train on Beijing-Shanghai high-speed railway line before it leaves the Cangnan railway station on November 20, 2017

China has the world’s largest high-speed railway network, which measures a staggering 35,000 kilometres (21,747 miles) as of 2019, according to China Central Television Station.

The distance is more than two-thirds of the world’s total.

The country’s total railway coverage is 139,000 kilometres (86,370 miles), enough to wrap the Earth three times by the equator.

China is investing heavily in the construction of its rail system.

Xinhua News Agency reported that Beijing completed its largest-ever investment in railway construction between 2013 and 2017.

The country’s newest high-speed train model is ‘Fuxing’, or ‘Rejuvenation’, which runs at a speed of 350 kilometres (217 miles) an hour.

The model before ‘Fuxing’ is called ‘Hexie’, meaning harmony.