The least productive 10 per cent of land in England produces only around 0.5 per cent of the food we eat, according to the latest National Food Strategy.

It could also boost incomes for farmers of this land by around 20 per cent, by allowing them to combine income from food production with payments for environmental goods, Green Alliance claims.

The think tank is therefore calling for the Government to allocate £600 million of its existing £2.4 billion rural payments budget to restoring natural habitats on land that produces the least food. 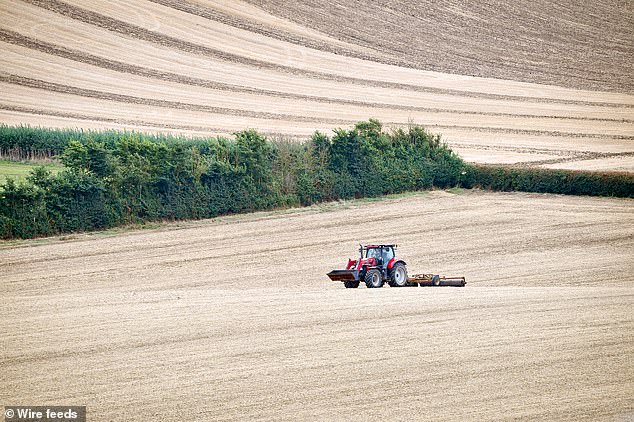 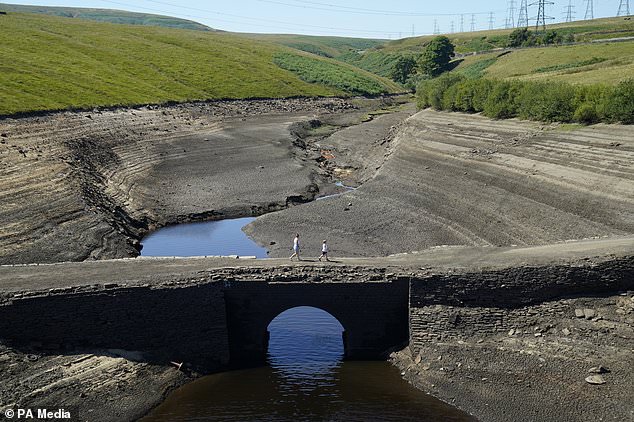 Green Alliance said its plan for a ‘three pronged’ agricultural system would help farmers as they try and navigate soaring fuel and fertiliser costs, as well as record heat and unprecedented drought

Seventy percent of England’s land is used for agriculture, and the industry accounts for about 12 per cent of greenhouse gas emissions for the UK overall.

The Green Alliance’s ‘Land of Opportunity’ report, published on Monday, states that the plan has the potential to deliver over half the carbon savings needed from agriculture and land use by 2035.

To hit ‘net zero’ across the whole economy, land use must be carbon negative before 2050, according to research by the Government’s advisory body on climate change.

Green Alliance said its plan for a ‘three pronged’ agricultural system would help farmers as they try and navigate soaring fuel and fertiliser costs, as well as record heat and unprecedented drought.

Under the system, the least productive land would be used to provide greenhouse gas removal and to expand habitat for wildlife.

The second prong would see the majority of food grown on the most fertile land, with farmers supported to reduce fertiliser and pesticide use to boost sustainability without lowering yields.

Lastly, farmers of the remaining land would be offered incentives to create more space for nature, even if this  results in a fall in production.

It is projected that habitat restoration would see the population of bird species increase by 48 per cent on average, compared to a 6 per cent decline under England’s current trajectory.

Britons could be faced with a ‘big increase’ in food prices and shortages due to an overhaul of payments for farmers, a Commons committee warned in January.

The Government’s plans to reward farmers for protecting the environment are based on ‘blind optimism’ and could leave the country entirely dependent on imports.

The National Farming Union also has growing concerns about Britain’s food security, warning changing the use of agricultural land will damage the UK’s self-sufficiency and lead to increased imports.

‘Land is a finite resource with many competing demands placed upon it. We need space for nature, climate change mitigation and adaptation, and food and timber production,’ said Tom Lancaster, head of farming and land management policy at the RSPB.

‘This report shows the vital role farmers and land managers will play in achieving all this and more. They need better support to tackle the nature and climate crises, whilst providing the food we need now, and in the future.’

Green Alliance emphasised that blanket rewilding of farmland is not the solution, as there are many species that thrive in nature-friendly farmed environments, rather than wilder habitats.

It said the system would not require any additional funding, and would help farmers as they adjust to the withdrawal of the Basic Payment Scheme, a system of EU-wide subsidies.

The scheme is being replaced by a series of environmental land management systems, where farmers are given ‘public money for public goods,’ including restoring natural habitat.

But Green Alliance warned that delays to reforms are leaving producers in limbo, with many facing a financial loss in the coming years. 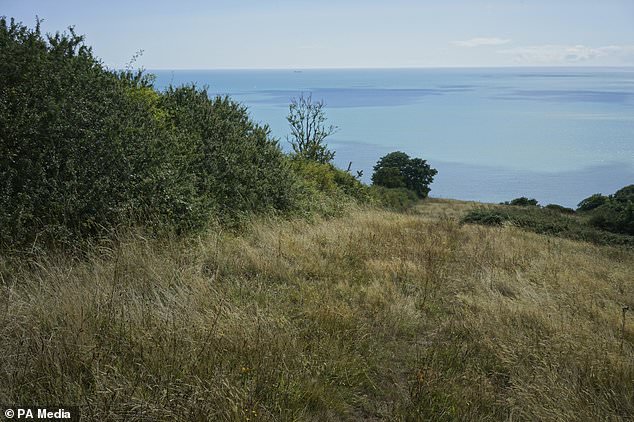 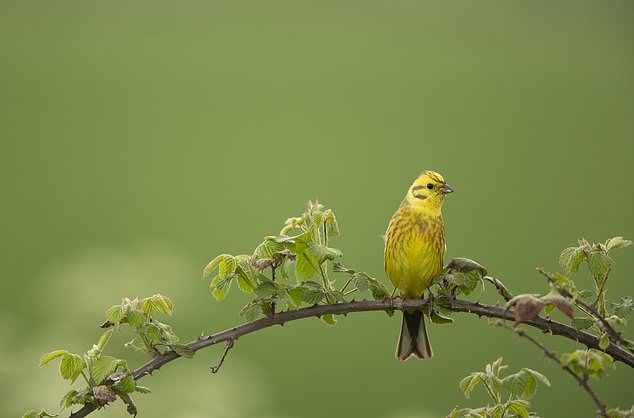 Green Alliance emphasised that blanket rewilding of farmland is not the solution, as there are many species that thrive in nature-friendly farmed environments, rather than wilder habitats. Pictured: A yellowhammer on a hedge in Bedfordshire

Post-Brexit, ministers set out a three-strand plan for nature – including large- scale landscape recovery projects, incentives for sustainable farming and local projects such as meadows or hedgerows creation.

Each strand had been expected to be allocated one-third of the farming budget, or £800 million.

But in June the Government said it would spend £50 million on the landscape recovery element over the next three years, with plans to choose up to 15 pilots from 51 applications this summer.

Officials insisted the plans for the scheme had not changed but said they will not have fixed funding allocations for different strands as they want the flexibility within the overall budget.

Green Alliance said its plan would see farms on unproductive land, known as ‘less favoured areas’ (LFAs), being paid £775 per hectare a year for habitat creation.

According to its analysis, if the system were to be adopted restoring 50 hectares of land on a holding would give annual returns of £28,000, once costs are accounted for.

It compares to average returns of £23,400 for the whole farm business currently.

‘But there are now fears we will return to a climate destructive EU-style system or ignite a race to the bottom where farmers and the environment both lose.

‘This is about making sure we use the least productive land in the best way, boosting farmer incomes while restoring nature and starting to tackle the increasingly destructive effects of climate change.’

Last month, the Environment Agency went even further than Green Alliance, calling for one-fifth of the UK’s agricultural land to be given over to projects to reduce emissions and sequester carbon.

What is the Government’s plan for replacing the EU’s £2.4bn-a-year Common Agricultural Policy?

The ‘Sustainable Farming Incentive’ will replace the EU’s common agricultural policy that was worth more than £2.4billion a year.

Under the EU’s Common Agricultural Policy, farmers were given taxpayers’ money from Brussels broadly based on the amount of land they farmed. This meant that the more land they had, the more cash that came their way.

Until 2024, the Government will maintain the £2.4billion paid to the UK in EU agriculture subsidies, but will halve the £1.8billion handed out in direct payments to farmers.

The £800million to £900million-a-year saved will go towards the new ‘landscape recovery’ scheme.

It will pay farmers for protecting the environment instead of largely receiving payments to grow crops and rear livestock.

Farming accounts for more than 10 per cent of UK greenhouse gas emissions, making it critical to climate change.

The Country Land and Business Association (CLA) praised the scheme as potentially ‘the most progressive and environmentally responsible’ of its kind.

But Britain’s three biggest nature charities – the Wildlife Trusts, National Trust and RSPB – said it was a ‘huge disappointment’.

Instead of encouraging farmers to prevent harm to the environment in the form of air and water pollution and soil erosion, the scheme rewards the status quo, the charities claimed.

They added that standards saying legumes, which improve soil health, are required on only 15 per cent of land was ‘a really low ambition’.

Craig Bennett of the Wildlife Trusts said: ‘After leaving the EU, we were promised that the billions of pounds of taxpayers’ money given to farmers would be used to improve our natural world.’.

He added: ‘It’s an absolute scandal that the Government has failed to seize this unique and important opportunity.’