T.Rex didn’t just have tiny arms! The King of the Dinosaurs also had small EYES to allow for stronger bites, study claims

It is well-known that the King of the Dinosaurs, Tyrannosaurus rex, had tiny arms.

But it turns out the species may also have evolved narrower eye sockets than their ancestors to allow them to bite more powerfully.

While in many animals – and most dinosaurs – the eye socket is just a circular hole in the skull housing the eyeball, this is very different in large carnivores.

In a new study, researchers at the University of Birmingham reveal that the unusual elliptical, or oval, eye sockets found in the skulls of these predators may have developed to help their skull absorb impact as they pounced on prey.

They suggest that evolving narrower eye sockets may have reduced the space available for eyeballs within theropod skulls, but created more room for jaw muscles and enhancing the robustness of their skulls. 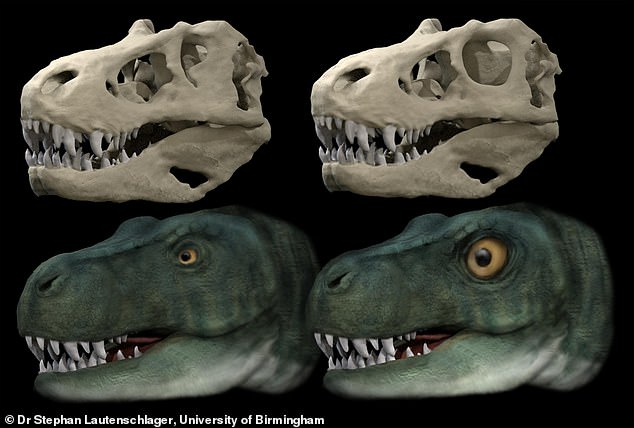 King of the dinosaurs: T.Rex may have evolved narrower eye sockets than their ancestors to allow them to bite more powerfully, experts say. They compared a skull and life reconstruction of T.Rex with its original eye socket and eye (left) alongside a hypothetical reconstruction with circular eye socket and enlarged eye (right) to measure forces during biting simulations 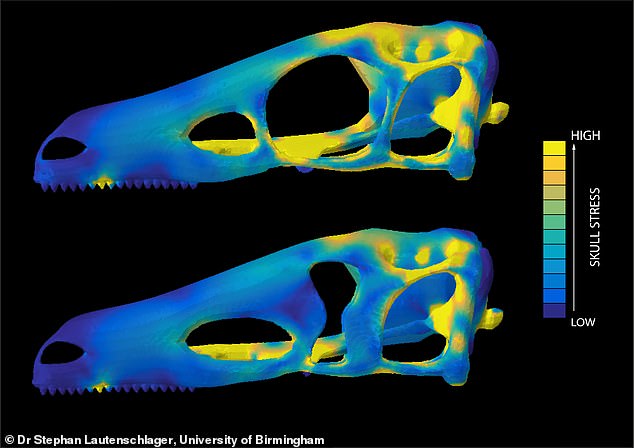 Tyrannosaurs rex was a species of bird-like, meat-eating dinosaur.

It lived between 68–66 million years ago in what is now the western side of North America.

More than 50 fossilised specimens of T.Rex have been collected to date.

The monstrous animal had one of the strongest bites in the animal kingdom.

An artist’s impression of T.Rex

This may have helped them bite more powerfully at the expense of accommodating larger eyes, which previous research has suggested can improve visual perception.

Dr Stephan Lautenschlager, senior lecturer for Palaeobiology at the University of Birmingham and author of the new study, analysed the shape of the eye sockets of 410 fossilised reptile specimens from the Mesozoic period (between 252 and 66 million years ago).

These included dinosaurs and their close relatives such as crocodiles.

He found that most species, particularly herbivores, had circular eye sockets.

However, large carnivores with skulls longer than 3.2ft (1m) often had elliptical or keyhole-shaped eye sockets as adults, although they tended to have circular sockets as juveniles.

These observations suggest that larger carnivorous species evolved keyhole-shaped eye sockets over time but that they developed this shape as adults, not youngsters.

‘The results show that only some dinosaurs had eye sockets that were elliptical or keyhole-shaped’, Dr Lautenschlager said.

‘However, all of those were large, carnivorous dinosaurs with skull lengths of 3.2ft (1m) or more.’

To study the impact of eye socket shape on skull structure and function, researchers compared the forces that a theoretical model reptile skull with five different eye socket shapes was subjected to during biting simulations.

They found that a skull with a circular eye socket was more prone to high stresses during biting.

However, if these were replaced with other eye socket shapes, stresses were considerably reduced. The experts surmised that this allowed top predators, including T.Rex, to evolve high bite forces without compromising skull stability.

Only large adult carnivores adopted other morphologies, such as elliptical, keyhole-shaped or figure-of-eight-shaped eye sockets.

Dr Lautenschlager added: ‘In these species, just the upper part of the eye socket was actually occupied by the eyeball.

‘This also led to a relative reduction of eye size compared with skull size.’

The researchers also looked into what would have happened if eye size had increased at the same rate as skull length.

The study has been published in the journal Communications Biology.