Look up tonight! Final supermoon of the year will peak this evening – and you might even see shooting stars from the Perseids Meteor Shower if you’re lucky

Skies over the UK will be lit up by the final ‘supermoon’ of the year tonight – and it should coincide with the start of the Perseids Meteor Shower.

The August supermoon will be visible between sunset on Thursday and sunrise on Friday morning, although the moon will reach full illumination at 02:36 BST.

It means the moon will appear especially big and bright, providing the public with some excellent photo opportunities as long as there are few clouds.

A supermoon occurs when a full moon nearly coincides with perigee – the point in the orbit of the moon at which it is nearest to the Earth.

This means a supermoon can appear as much as 14 per cent larger and 30 per cent brighter than a normal full moon, depending on the time of year.

Nicknames that are used to describe the supermoons were traditionally used to track the seasons and therefore are closely related to nature.

‘Sturgeon Moon’ is the common name for August’s full moon because historically the large fish was easily caught at this time of year.

This weekend also marks the peak of the Perseids Meteor Shower, which could see around 150 meteors in the sky per hour.

Perseids is often dubbed the best of the year because of how bright and active it is. 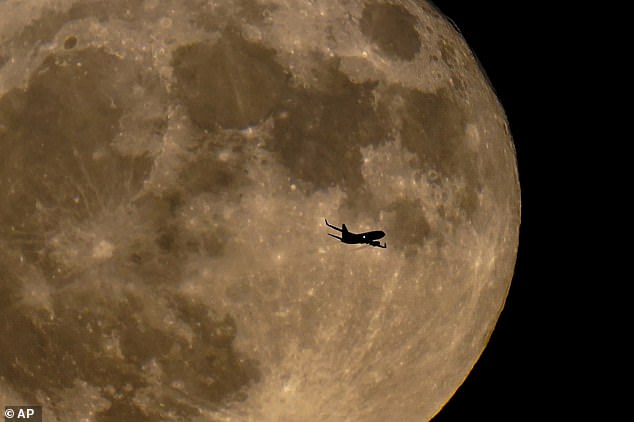 A supermoon occurs when a full moon nearly coincides with perigee – the point in the orbit of the moon at which it is nearest to the Earth. Pictured is last month’s supermoon, on July 13 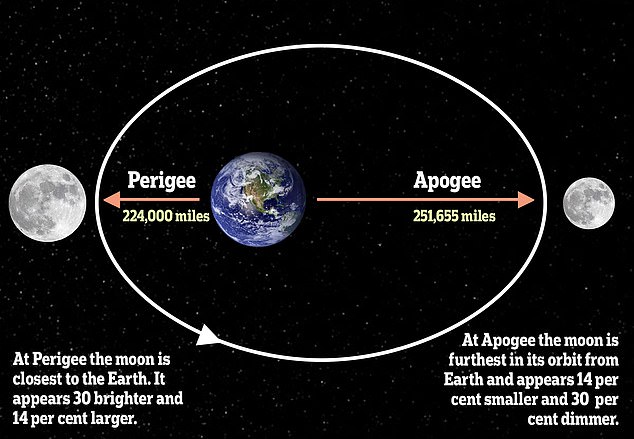 At the point in the Moon’s orbit when it’s closest to the Earth, it appears 14 per cent bigger than a micromoon, and vice versa 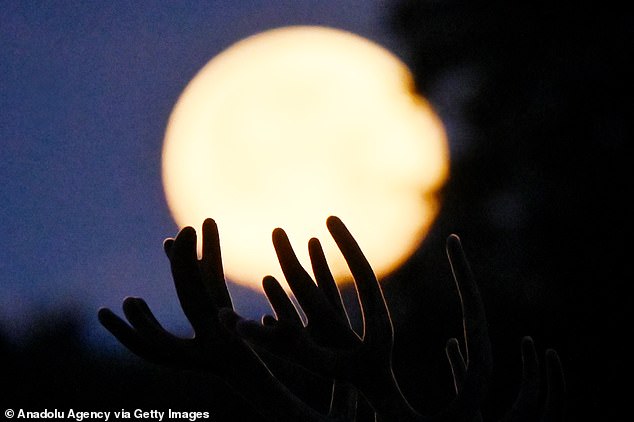 July’s super moon is seen as a deer grazes outside the village of Taarbaek, some 15 km north of Copenhagen, on July 14, 2022 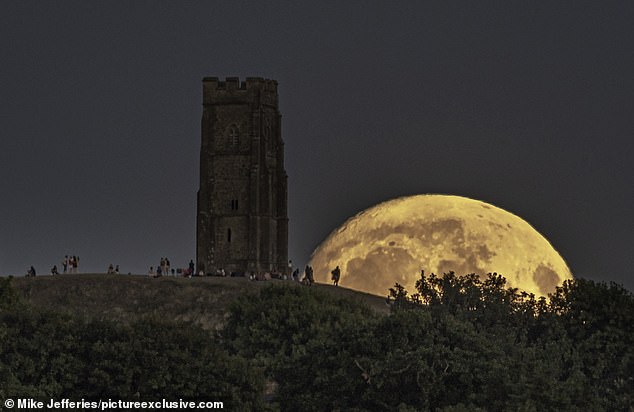 Pictured is the moon rising behind Glastonbury Tor in Somerset on Wednesday evening (August 10). The moon was at 96 per cent illumination on Wednesday night. When it reaches 100 per cent illumination on Thursday night it will be a full moon. The moon will also be a supermoon tonight, because it marks the point in the orbit of the moon at which it is nearest to the Earth

WHAT IS A SUPERMOON?

A ‘supermoon’ appears to us as a larger-than-usual Moon in our night sky.

A supermoon takes place when the moon is full and its orbit at its perigee point is closest to Earth.

As the moon orbits in an ellipse its closest point – the perigee – will come very close to earth. The farthest point of the ellipse is called the apogee.

When a full moon appears at perigee, the moon looks brighter and larger than a regular moon, hence the nickname supermoon.

It’s well known that a full moon occurs roughly every 29.5 days, but a supermoon is a much rarer event.

In 2022, there have been three supermoons so far according to the Old Farmer’s Almanac, on May 16, June 14 and July 13, and the fourth and final supermoon is due tonight, August 11.

Although a supermoon is a full moon, it appears bigger and brighter in the sky than a normal full moon.

Supermoons occur because the moon orbits the Earth on an elliptical path, rather than a circular one.

This means there is a point in its 29.5-day orbit where it is closest to the Earth and, at certain times of the year, it passes this point during a full moon.

A supermoon occurs when the full moon nearly coincides with perigee – the point in the orbit of the moon at which it is nearest to the Earth.

This means it appears up to 14 per cent larger and 30 per cent brighter than normal, when viewed from Earth.

‘This full moon is occurring when the moon is that little bit closer to Earth than it is during other full moons.

‘This is a time that many become excited and want to observe the moon themselves, particularly as the moon rise and set offers stunning photographic opportunities.’

Get up high! The further up you are, the better your chance of a clear sky to see the stars, plus you’ll be able to see low down to the horizon to watch the moon rise!

Turn off the lights For those stargazing from the comfort of their homes, turning off the lights indoors can improve the visibility of the night sky.

Choose a night with clear skies suggests choosing a night when clear skies are expected for the best chances of seeing the stars.

While the closest point in the moon’s orbit is called perigee – which creates an unusually large supermoon – its farthest point is called apogee, creating a ‘micromoon’.

Because a micromoon is further away, it looks around 14 per cent smaller than a supermoon, and as its illuminated area also appears 30 per cent smaller, so it tends to look less bright.

Also this weekend, stargazers will be able to enjoy a stunning meteor shower called the Perseids without the need for a telescope.

Known as the ‘fiery tears of Saint Lawrence’, the celestial event takes place when the Earth ploughs through galactic debris left by the passing of the Swift-Tuttle Comet.

Royal Observatory Greenwich calls it ‘one of the most dramatic things to see in the night sky between July and August’.

This year, the peak of the Perseids falls on the night of August 12 (Friday) and before dawn on August 13 (Saturday).

During this period, there could be up to 150 shooting stars per hour this year, according to Royal Observatory Greenwich.

The Met Office told MailOnline that skies are expected to be completely clear for much of the UK, with excellent viewing conditions for the supermoon on Thursday night. 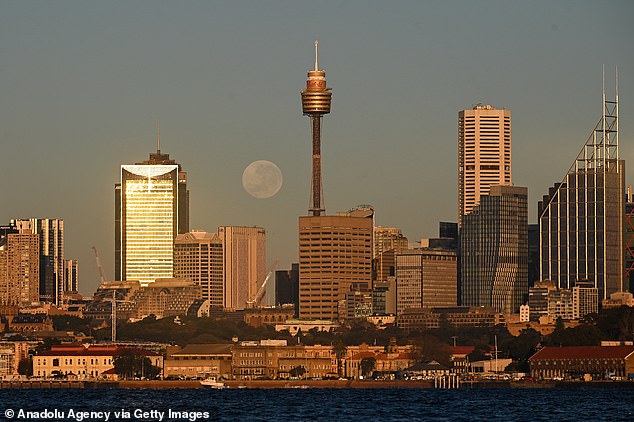 The full moon, otherwise known as a supermoon, is seen over the skyline of the CBD in Sydney, Australia June 15, 2022 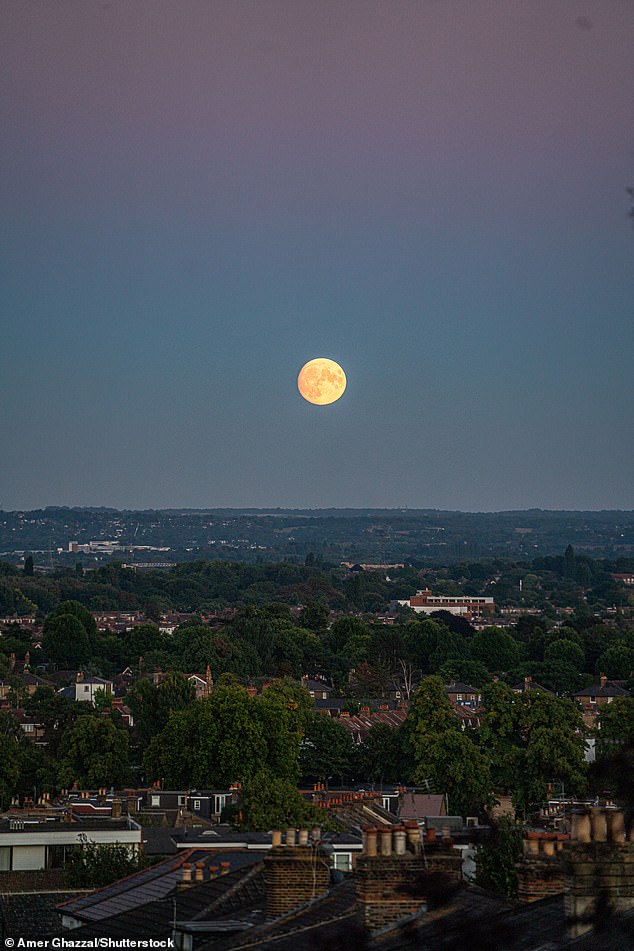 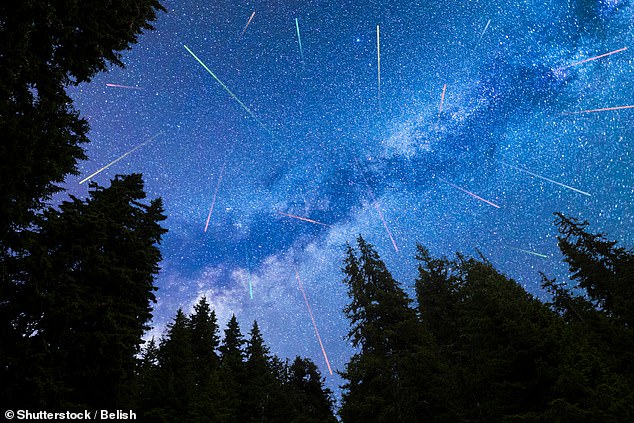 Also this weekend, stargazers will be able to enjoy a stunning meteor shower called the Perseids without the need for a telescope 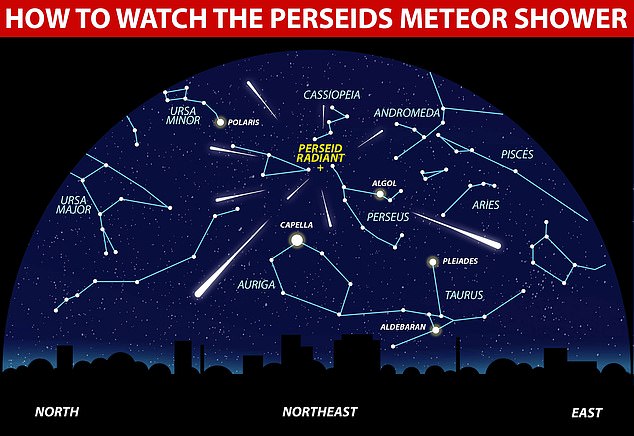 The meteors are called Perseids because they seem to dart out of Perseus, a constellation in the northern sky, which itself is named after the Greek mythological hero Perseus 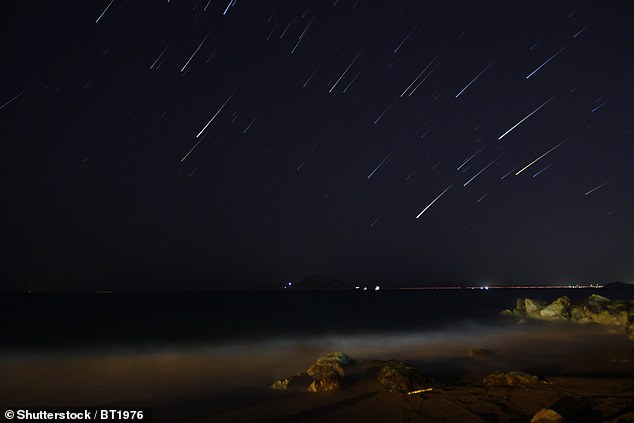 Known as the ‘fiery tears of Saint Lawrence’, the celestial event takes place when the Earth ploughs through galactic debris left by the passing of the Swift-Tuttle Comet 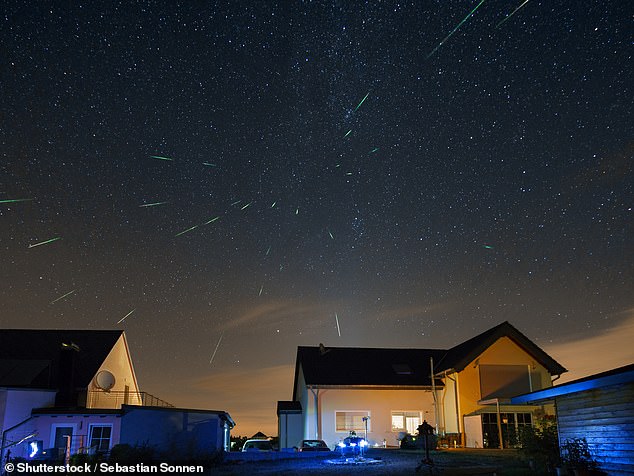 ‘The best thing you can do to maximise the number of meteors you’ll see is to get as far away from urban light pollution as possible and find a location with a clear, unclouded view of the night sky,’ NASA says.

Search for the darkest patch of sky, as meteors can appear anywhere overhead.

The meteors will always travel in a path away from the constellation the shower is named after – in this case, Gemini. The apparent point of origin is called the ‘radiant’.

Searching for the constellation in the night sky, could help viewers spot more shooting stars.

NASA advises dressing up warmly and bringing something comfortable to lie or sit upon and advises people plan to stay outside looking at the skies for at least half an hour. It also says to put away telescopes and binoculars.

‘Using either reduces the amount of sky you can see at one time, lowering the odds that you’ll see anything but darkness. Instead, let your eyes hang loose and don’t look in any one specific spot.

‘Relaxed eyes will quickly zone in on any movement up above, and you’ll be able to spot more meteors.’

‘However, skies will be cloudier in the far northwest of Scotland, and there will be some mist and fog patches in Northern Ireland and East Yorkshire,’ a Met Office spokesperson said.

‘Clear skies are also expected for most of the UK on Friday night for the Perseids meteor showers.

‘However again there will be a layer of cloud in northwest Scotland making for poor viewing conditions here.’

It’s possibly that light from the supermoon could make the Perseids harder to see. When watching for meteors, the darker the sky the better.

When comets come around the Sun, the dust they emit gradually spreads into a dusty trail around their orbits.

Every year, Earth passes through these debris trails, which allows the bits to collide with our atmosphere where they disintegrate to create fiery and colourful streaks in the sky.

However, the events won’t pose a threat to humans as the objects nearly always burn up in our atmosphere before reaching the planet’s surface.

The Swift-Tuttle Comet, which causes the Perseids, spans 16-miles wide and is formed of ice and rock.

It ploughs through our Solar System once every 133 years, with the last pass in 1992.

The name ‘Perseids meteor shower’ comes from the fact meteors appear to shoot out from the Perseus constellation – the 24th largest constellation in the sky.

The event is best for viewing in the Northern Hemisphere during the pre-dawn hours, although sometimes it is possible to view them as early as 10pm.

‘The radiant for the Perseids – the point in the sky the meteors appear to come from –  is in Perseus, and high in the Northern Hemisphere of the sky,’ said Dr Robert Massey, deputy executive director of the Royal Astronomical Society.

‘This also means the radiant never rises for places south of 32 degrees south, so the southernmost parts of Australia, and much of Argentina and Chile.

‘The upshot is that the Northern Hemisphere has the best potential view, as the radiant is higher in the sky and visible for longer, so in theory more meteors are visible.

‘As you move further south the number declines, and south of 32 degrees south essentially none are seen.’

The next major meteor shower will be the Draconids in October, although it tends to tends to be a less active shower than the Perseids.

The Draconid meteor shower comes from the debris of comet 21 P/ Giacobini-Zinner – a small comet with a diameter of 1.24 miles (2 kilometers).