Does Taylor Swift deserve criticism over her private jet habits? Academics claim focusing on the carbon footprint of individuals diverts attention away from fossil fuel companies – but celebrities should set an example

Taylor Swift hit the headlines this week, as she was named the ‘biggest celebrity CO2 polluter of the year’.

Swift’s private jet was in use for 170 out of the first 200 days of the year and emitted 8,293.54 metric tons of carbon dioxide (CO2) – 1,184.8 times what a normal person emits each year, according to a report from the sustainable marketing firm Yard.

A spokesperson for the Grammy-winning singer said that Swift’s jet is ‘loaned out regularly to other individuals,’ and ‘to attribute most or all of these trips to her is blatantly incorrect.’

However, many people have taken to Twitter to criticise her, with one claiming 170 flights is a ‘heinous amount in a short time span.’

But does Swift really deserve this criticism?

In a new report, academics from Northeastern University argue that focusing on the carbon footprint of individual celebrities diverts responsibility away from fossil fuel companies.

However, they said that celebrities should still make climate-mindful travel choices, to set an example to their followers. 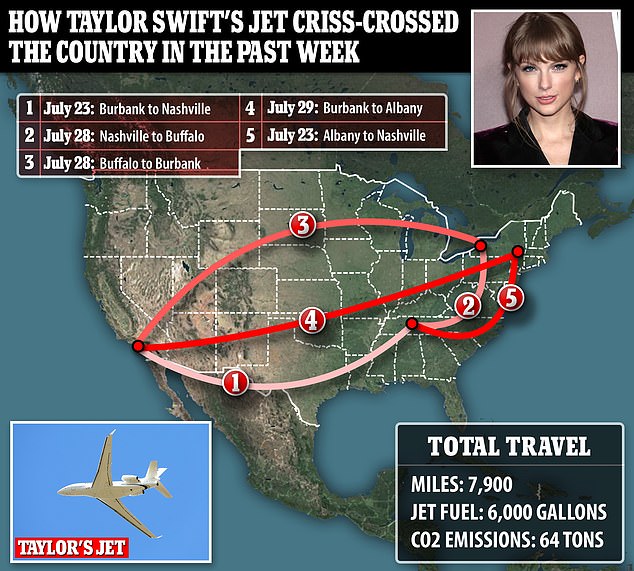 Swift’s private jet was in use for 170 out of the first 200 days of the year and emitted 8,293.54 metric tons of carbon dioxide (CO2) – 1,184.8 times what a normal person emits each year, according to a report from the sustainable marketing firm Yard

In their new report, the researchers acknowledge that the controversy surrounding Swift’s CO2 emissions has been a great opportunity to bring attention to the ethics of flying.

Dr Laura Kuhl, assistant professor of public policy and urban affairs and international affairs at Northeastern, said: ‘I think it’s great that there’s attention being brought to the issue of the ethical considerations of flying.

‘The impacts of flying, even if it’s commercial flights, are really, really high.’

While the majority (57 per cent) of transport emissions in the US come from cars, flights make up eight per cent of emissions, according to the researchers.

Compared to commercial flights, private jets are very inefficient – both due to the length of flights they tend to complete, and the number of passengers.

Dr Kuhl points out that many private jet flights are relatively short, with some, such as Kylie Jenner’s flight on Sunday, lasting mere minutes.

The majority of emissions are generated during takeoff and landing, making these short flights particularly inefficient.

However, the researchers say that focusing on the carbon footprint of individual celebrities diverts responsibility away from the main driver of CO2 emissions – fossil fuel firms.

‘It’s true that the majority of emissions are generated by a small number of fossil fuel companies that are driving the supply of fossil fuels,’ Dr Kuhl said.

‘Absolutely we should not lose sight of the need to put regulations in place.’

A report in 2017, titled the Carbon Majors Report, revealed that just 100 companies are responsible for 71 per cent of global carbon emissions.

Firms including ExxonMobil, Shell, BP and Chevron have been the highest emitting companies since 1988, according to the report.

However, rather than taking responsibility for these emissions, many of these corporations are deflecting the blame onto consumers, according to Dr Kuhl.

She highlights the fact that the term ‘carbon footprint’ was coined by British Petroleum in 2004 to describe how individual actions fuel climate change.

‘They wanted to push the issue onto consumers, of individual responsibility,’ Dr Kuhl said.

Overall, Dr Kuhl says that she doesn’t think that taking responsibility for carbon emissions is an ‘either/or’ situation.

‘We need to be addressing it from all directions,’ she said.

Alexandra Meise, associate teaching professor at the Northeastern School of Law, added: ‘Individuals may not be able to make the same contribution, but it doesn’t mean individuals can’t make a difference.

‘If we are going to meet the targets that experts say are necessary in order to keep global temperature rises below that magic 1.5 degrees Celsius that they call for to avoid cataclysmic consequences, then we do need every little bit that we can get.’

WHAT ARE THE UK’S PLANS FOR ‘NET ZERO’ CARBON EMISSIONS?

However, experts are concerned over how the proposals will work.

The report commits to ensuring that the emissions generated by the UK are offset by removing the same amount of carbon from the atmosphere.

Some critics are worried that this first option will be used by the government to export it’s carbon offsetting to other countries.

Some argue that the scheme is a way for developed nations to shirk their environmental obligations, by passing them to poor and developing countries.