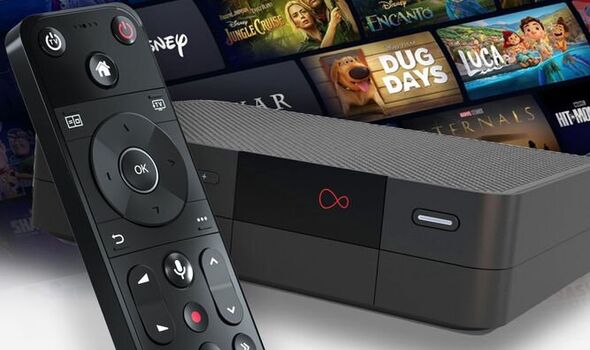 Virgin Media is finally catching up with Sky Q and Sky Glass, thanks to the launch of the Disney+ app on its popular TV 360 set-top box. Until now, users of this premium device needed to own another streaming dongle, such as a Fire TV Stick, to access this popular content but it appears that has now all changed.

Virgin Media is running an incredible money-saving deal which includes a free LG 4K TV – worth over £470 – when you sign up for three of its popular plans.

Virgin has just announced the arrival of this must-have app with users also confirming it’s already on their device. Posting a message on its community forum page, one excited Virgin Media customer named Matt said: “I wasn’t sure if everyone is aware but I now have the Disney plus app on my 360 box. I know people have been waiting for it for a while so I thought I would post.”

Those with a TV 360 box should now find Disney+ in the app section of the homepage or it can be discovered by a simple voice command. Just say “Disney+” and it should launch automatically.

Virgin is also boasting that its fully integrated search function means Disney+ fans can access favourite content in just a few taps on the remote or via that voice search option.

It’s an important update from Virgin, with Disney+ now one of the most popular streaming services in the world.

Virgin Media outline the features of their 360 TV remote

If you weren’t already aware, Disney+ offers access to a swathe of content from franchises such as Marvel, Pixar, National Geographic and Star Wars.

Along with blockbuster movies, it also features exclusive boxsets and award-winning series which can all be viewed for £7.99 per month fee.

That price also includes access to the Star section of the app which contains content that is aimed at older audiences. Right now, Star is showing boxsets that include Only Murders in the Buiding, 24 and Code Black plus there are movies such as Die Hard, Logan and Free Guy.

Want to know more? You can read all of the best Disney+ deals.

Although Disney+ has launched on the 360 boxes it seems users of the older V6 and TiVo devices aren’t getting this upgrade just yet.

Confirming today’s news David Bouchier, Chief TV and Entertainment Officer at Virgin Media O2 said: “The addition of Disney+ on Virgin TV 360 is fantastic news for our customers and adds to the brilliant range of programming available via our service. The combination of live TV, catch up and streaming services, means that with Virgin TV 360 there’s something for everyone to enjoy.”

There is, of course, one other way to get Disney+ via Virgin with the firm also offering it via its new Stream box. This mini box that plugs straight into any telly and allows customers to beam content to the big screen via their Wi-Fi connection. What makes it unique is that Virgin has made it simple to add and remove different streaming services, with customers never forced to sign up for lengthy contracts.