Workplace training and education is broken, according to Australian start-up EdApp, which has a novel idea for its next step on the path to making lessons enjoyable and effective – celebrity educators.

Since launching in 2015, EdApp has grown to deliver more than a million lessons globally each month, and in 2020, it was acquired by workplace ops unicorn SafetyCulture at a valuation of $40 million. 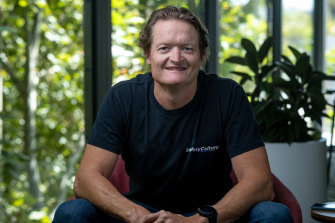 The app — which is free but comes with subscription fees for more advanced integrations — breaks training down into five-minute gamified “micro-lessons”, which can be delivered via smartphone. And this month, the service will launch courses with celebrity hosts.

EdApp founder and chief executive Darren Winterford accepted the concept was similar to seminar service MasterClass, but EdApp’s focus would be on workplace learning.

“Unlike Masterclass that probably goes for the straight-out celebrity, our approach was to look for leaders and look for people with experience that are also passionate about teaching,” he said.

“People who want to make sure that what they have learned can be passed through and can be applied in the workplace.”

Legendary British cave diver John Volanthen, one of the leaders in the 2018 Tham Luang cave rescue, will deliver the first of EdApp’s new courses.

“He’s very passionate to pass on what he’s learned about performing under pressure,” Winterford said. “What were the decisions he came up against? How did he try and prioritise? What did he have to do in terms of focus?”

Karamo Brown, star host of the popular Netflix series Queer Eye, will deliver a course on diversity and inclusion. 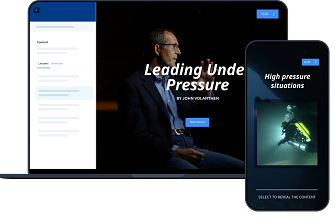 The first celebrity EdApp course will be delivered by cave diver John Volanthen.

EdApp is used broadly around the world in industries ranging from automotive to healthcare, covering compliance and certifications as well as onboarding and upskilling. It was even used to train ball kids for last year’s Australian Open, and The United Nations uses it to provide education to vulnerable communities in the Middle East and Sub Saharan Africa.

Winterford said the original idea behind the app was to replace a system that often had content written in the 1980s, sometimes from a different continent or from people with no industry experience.

“I don’t think there’s many people that look forward to doing their workplace training. And for the most part, it’s also highly ineffective,” he said.

“Traditional training tends to result in people either sitting in a dark room, being hurried into a canteen somewhere, or it’s pointless 90-minute click click click e-learning, which we know has terrible engagement rates and effectiveness.”

Traditional training was also often only available for the largest organisations, whereas EdApp can be deployed for teams of any size for free.

The introduction of celebrity lessons, Winterford said, was designed as an additional benefit next to the platform’s vast course library, but hopefully, it would also attract new users.

“We have organisations that are doing their basic compliance, but they’re looking for ways to supercharge their teams,” he said.

“But we also want to ensure that, for those people who are stuck using PowerPoint in a darkened canteen, that you’ve got content like John, like Karamo, and like those that are still to come, that make it an attractive platform.”

While no other instructors have yet been announced, Winterford said EdApp’s structure made it appealing for celebrities with knowledge to share.

“They understand that their content is going to be taken for free by small teams. And that is a wonderful thing,” he said.

“We will all benefit from organisations of all sizes becoming operationally more excellent.”