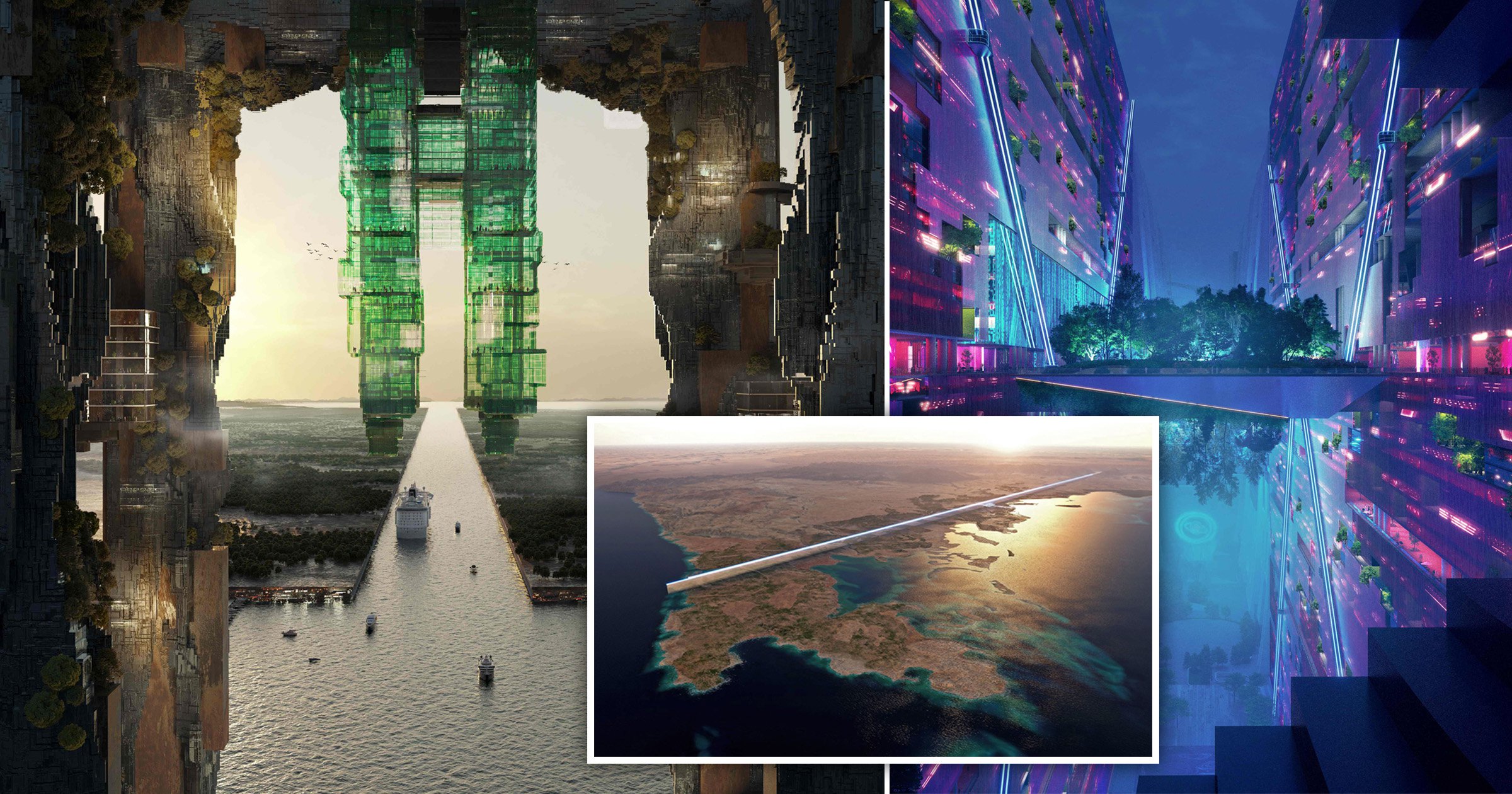 Saudi Arabia has published designs for a futuristic new city it claims will be a revolution in sustainable living.

Car-free and filled with lush green plants, the city has been sold as a sustainable paradise entirely powered by renewables.

Concept images released this week show shining glass walls that have been described in equal measure as utopian or dystopian, depending on who you ask.

But sustainable city design expert Melissa Sterry has criticised the project for failing to account for its effect on local ecosystems and for the carbon footprint of its build.

She gave Metro.co.uk several reasons to think this megacity isn’t the ecofriendly haven it’s cracked up to be:

1. It’s a barrier to animal migration

Design scientist and biofuturist Melissa Sterry, an expert in sustainable city design, told Metro.co.uk that the very essence of the city — it’s ‘Line’ design — would have serious impacts on animals that migrate across the region.

Like any other barrier of this length — be it a train track, a fence or a wall — it will interfere with animals’ normal journeys through the desert by blocking their path.

At a proposed 100 miles long and over 1,400ft high, The Line would be an incredibly difficult barrier for all manner of species to pass.

2. It’s a collision risk to birds

Encased in giant mirrored walls, Sterry says The Line would also be a major risk to avian life.

The city’s marketing materials say the walls ensure the city will blend into its desert surroundings. But that’s exactly the problem for birds.

Reflective surfaces like mirrors — even at low heights — are really hard for birds to negotiate, as they can’t tell what’s real and what’s not. They may fly into the side of a shiny building, thinking its just a patch of sky.

Bird collision is already one of the biggest threats to avian life. Back in 2014, scientists estimated between 365 million and one billion birds died from these collisions every year in the US alone.

In addition to the hundreds of native bird species that fly through the skies of Saudia Arabia, millions of birds migrate through the country every year via the Red Sea, along which The Line would be built.

Awareness of bird-building collision is gradually increasing, with some cities requiring the use of patterned glass for taller buildings. But there’s no mention of this kind of glass in any of the design materials released so far.

3. It could be a haven for invasive species

But these plants may put the local environment at risk. The kind of leafy species depicted in the pictures aren’t native to Saudi Arabia.

And, as anyone with Japanese knotweed in their garden knows, the wrong invasive plant can not only prevent others from thriving, it can cause serious unanticipated damage.

Insects like ants and mosquitos, which can travel via imported plants, bringing with them potential risks to human health.

The waterways depicted in design images could end up as fertile grounds to disease-carrying mosquitos that don’t have natural predators nearby, for example.

And this isn’t just a hypothetical scenario. Insects have created havoc in artificial ecosystems before.

Back in the 1990s, the US’s Biosphere 2 — a $200m glass house built as a research project — was overrun by an invasive species of ant that decimated the deliberately-introduced insect population.

Keeping a wholly artificial ecosystem like Biosphere contained, she said, just isn’t realistic. ‘You can’t control a system as complex as that.’

It’s not that you can’t build a large enclosed garden succesfully — Singapore, for example, has more than one. But these projects tend to contain species you’d expect to see locally, rather than those from a completeld different environment.

Botanic gardens that do contain exotic, invasive species are usually managed by scientists who have to follow strict codes of conduct. But even then, spillovers do sometimes still happen.

‘[Singapore’s gardens are] not desert versus what would in fact be a sort of tropical system,’ Sterry said. ‘[Saudi Arabia] is proposing to bring what would be an invasive and alien ecosystem in the heart of the desert.’

An enormous structure, the Line will require massive amounts of building materials to be transported to its desert location.

The new design images don’t go into great detail as to the construction materials what exactly the city is made from, but Sterry said it’s likely to require lots of concrete and glass.

These materials are made from sand — but not the kind you find in the deserts of Saudia Arabia. This sand is too smooth to bind properly for construction materials.

Instead, you need a rougher, more angular sand that’s dredged — often illegally — from the banks and beds of water sources, quarries and coastlines. It’s a poorly regulated industry where violent mafias control much of the market, and concern for the environment takes a back seat.

Sterry said: ‘There are major disputes going on at country level over the shortage of sand — over the fact that we’ve been dredging up these ecosystems: these terrains where that kind of sand is taken at will.’

An arid environment, Saudi Arabia will need to import these scarce construction materials and transport them over great distances before they can be used to build The Line.

The city may well run on renewable energy, but the carbon footprint of the build itself will be astronomical.

5. It might create a monotonous, ‘prison’-like environment for residents

Beyond the environmental concerns, the city also needs to sustain a healthy population.

But Sterry is concerned that an enclosed design and single transport system would compromise the mental health of many of its inhabitants.

Ecologically, I’d say this is a disaster. Materials-wise, it’s a disaster. Then, of course, you’ve got the social issues.

The enclosed structure, for example, may come to feel ‘almost like a prison.’ It’s not clear what vantage points would be available from inside much of the structure, so how it’s hard to say how connected residents would feel to the outside world.

Although it boasts fast internal transport links, shuttling residents from one end of the city to the other in 20 minutes, Sterry says this may result in a lack of day-to-day variety.

It’s important to question, if ‘people are going to be happy to use a single tramway, to go up and down that every day monotonously, for the duration they live in the city — possibly even their entire lifetime.

The engineering constraints alone are also hard to fathom. To shift millions of people 100 miles in 20 minutes, the Line would have to develop something akin to Japan’s Shinkansen. And even those bullet trains only manage a top speed of 200mph. That’s enough to take you 66 miles in 20 minutes but far short of the Line’s promised commute time.

6. It could have major security risks

This ultra-fast transport network — whether its a series of trams or train — may also end up being a major security risk for The Line.

Cities normally have all manner of formal and informal transport links, from trains and buses to taxis, private vehicles and bicycles. These can make travel more resilient — even if a station is closed or a train line is down — residents can usually find another way to leave an area.

‘Normally it’s quite difficult to shut down a whole city through a terrorist incident, because if you take out one transport network, then obviously there are alternatives,’ she explained.

In the same way, the city could be more vulnerable to normal breakdowns and maintenance issues. Without alternatives, residents may end up stuck in one section of the city with no option other than to walk.

Unlike cities like London that have largely evolved as they have grown, The Line will presumably be largely planned before anybody moves in: a fully-formed, flat-pack kind of city.

That makes it totally different to most of the big cities we’re used to. Of course, elements of these cities — sometimes large swathes — are planned to some degree.

But their structures hold an internal logic that’s arisen from resident’s use of the city.

‘Cities typically emerge and evolve where people congregate. They are, if you like, the crossing points where humanity passes,’ Sterry said.

That’s evident from the very highest level — locations where cities are built, like ports — to the lowest: roads and intersections that reflect generations of walkers traveling towards the same destinations.

Rigidly planned cities like The Line tend to feature more in science fiction than the real world, Sterry said. And if there’s any message to be had from the major sci fi books and films of the last seventy years, she added, ‘it’s that people are people like freedom of choice.’

‘People like independence. People like free well. And when you subject them to very rigorous and very micromanaged environments, they will tend to throw up those systems.’

The social antithesis of ‘of what has historically worked,’ she added this would make The Line a ‘great big experiment.’

‘And that begs the quesion — will it work?’

Metro.co.uk has approached Neom — the ‘sustainable regional development’ behind The Line — for comment on all of the above points. We will update this article when we receive a response.