Nessie, is that you? Fossil discovery in freshwater river bed suggests Loch Ness Monster COULD have existed – but only 66 million years ago

The Loch Ness Monster’s existence is ‘plausible’, according to scientists, after fossils revealed that small plesiosaurs may have lived in freshwater 100 million years ago.

They inspired reconstructions of the Loch Ness Monster, but were traditionally thought to be sea creatures.

The discovery suggests that some species of plesiosaur lived in freshwater – lending credibility to the Loch Ness Monster legend.

However, the researchers point out that the last plesiosaurs died out at the same time as the dinosaurs, 66 million years ago, so anyone who claims to have spotted the mythical beast is unlikely to have seen a plesiosaur. 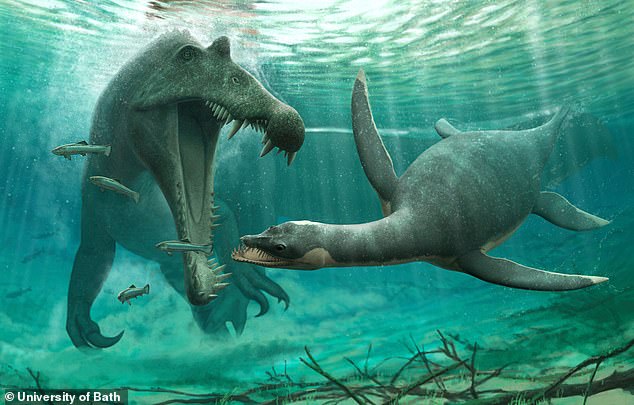 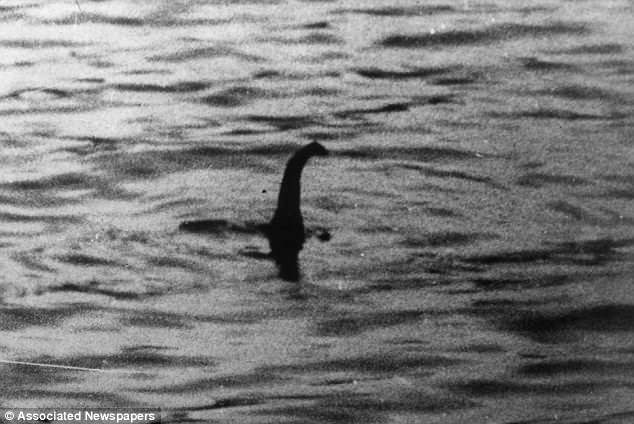 Among the most famous claimed sightings of the Loch Ness Monster is a photograph taken in 1934 by Colonel Robert Kenneth Wilson which was published in the Daily Mail. However, the researchers point out that the last plesiosaurs died out 66 million years ago

Ichthyosaurs, a large group of fish-shaped marine reptiles that were most abundant during the Jurassic period and disappeared before the end-Cretaceous extinction (65 million years ago).

Plesiosaurs were marine reptiles with four flippers and extraordinarily long necks. The plesiosaurs included elasmosaurs, which had the longest necks of the plesiosaurs.

On the other hand, plesiosaurs, who lived side by side with the ichthyosaurs in the Mesozoic Era, had entirely different bodies.

Their enormous four flippers which they used to fly underwater, and variable neck lengths, have no parallel amongst living animals.

Some elasmosaurs had extreme proportions, with necks up to 20 feet (6 metres) long, which likely helped them to snap up quick-moving fish.

The fossils, discovered in the Kem Kem beds of Morocco, which date back to the Late Cretaceous period, include bones and teeth from three-metre (10ft) long adults and an arm bone from a 1.5 metre (5ft) long baby.

They hint that these creatures routinely lived and fed in freshwater, alongside frogs, crocodiles, turtles, fish, and the huge aquatic dinosaur Spinosaurus.

‘The bones and teeth were found scattered and in different localities, not as a skeleton. So each bone and each tooth is a different animal,’ said Dr. Nick Longrich from the University of Bath’s Milner Centre for Evolution.

‘It’s scrappy stuff, but isolated bones actually tell us a lot about ancient ecosystems and animals in them. They’re so much more common than skeletons, they give you more information to work with.’

While the bones provide information on where animals died, the teeth were lost while they were still alive – so they show where the animals lived.

The teeth show heavy wear, like those fish-eating dinosaur Spinosaurus found in the same beds, implying the plesiosaurs were eating the same food – chipping their teeth on the armoured fish that lived in the river.

This hints they spent a lot of time in the river, rather than being occasional visitors.

While marine animals like whales and dolphins wander up rivers, either to feed or because they are lost, the researchers do not believe this is the explanation in the case of the plesiosaurs, due to the number of fossils found in the river.

A more likely possibility is that the plesiosaurs were able to tolerate fresh and salt water, like some whales, such as the beluga whale.

It is even possible that the plesiosaurs were permanent residents of the river, like modern river dolphins, according to the researchers.

The plesiosaurs’ small size would have let them hunt in shallow rivers, and the fossils show an extremely rich fish fauna.

‘It’s a bit controversial, but who’s to say that because we paleontologists have always called them ‘marine reptiles’, they had to live in the sea?’ said Dr Longrich.

The plesiosaurs belong to the family Leptocleididae – a family of small plesiosaurs often found in brackish or freshwater elsewhere in England, Africa, and Australia.

Other plesiosaurs, including the long-necked elasmosaurs, have also been found in brackish or fresh waters in North America and China. 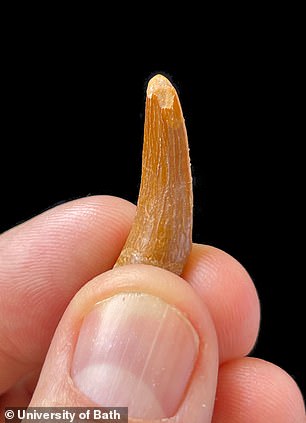 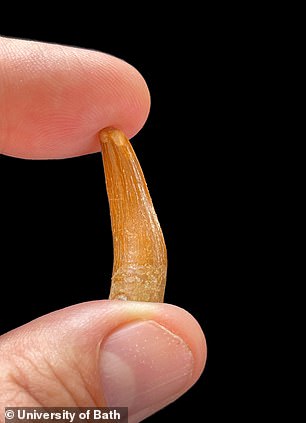 A leptocleidid plesiosaur tooth from the Kem Kem beds of Morocco 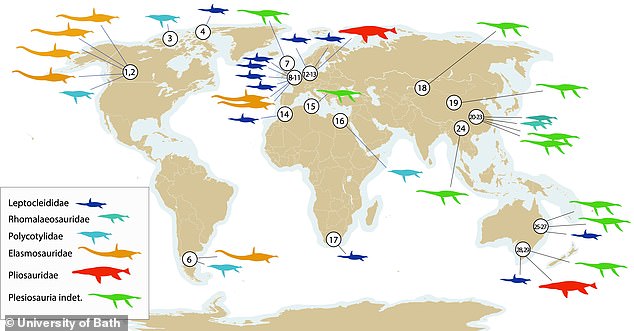 Plesiosaurs were a diverse and adaptable group, and were around for more than 100 million years.

Based on what they’ve found in Africa – and what other scientists have found elsewhere – the authors suggest they might have repeatedly invaded freshwater to different degrees.

The new discovery also expands the diversity of Morocco’s Cretaceous.

‘This is another sensational discovery that adds to the many discoveries we have made in the Kem Kem over the past fifteen years of work in this region of Morocco,’ said Samir Zouhri from the Universite Hassan II in Morocco.

‘Kem Kem was truly an incredible biodiversity hotspot in the Cretaceous.’

David Martill from the University of Portsmouth added: ‘What amazes me is that the ancient Moroccan river contained so many carnivores all living alongside each other. This was no place to go for a swim.’

What IS the Loch Ness Monster?

Rumours of a strange creature living in the waters of Loch Ness have abounded over the decades, yet scant evidence has been found to back up these claims.

One of the first sightings, believed to have fuelled modern Nessie fever, came in May 2, 1933.

On this date the Inverness Courier carried a story about a local couple who claim to have seen ‘an enormous animal rolling and plunging on the surface’.

Another famous claimed sighting is a photograph taken in 1934 by Colonel Robert Kenneth Wilson.

It was later exposed as a hoax by one of the participants, Chris Spurling, who, on his deathbed, revealed that the pictures were staged.

Other sightings James Gray’s picture from 2001 when he and friend Peter Levings were out fishing on the Loch, while namesake Hugh Gray’s blurred photo of what appears to be a large sea creature was published in the Daily Express in 1933.

Robert Kenneth Wilson, a London physician, captured arguably the most famous image of the Loch Ness Monster. The surgeon’s photograph was published in the Daily Mail on April 21, 1934

The first reported sighting of the monster is said to have been made in AD565 by the Irish missionary St Columba when he came across a giant beast in the River Ness.

But no one has ever come up with a satisfactory explanation for the sightings – although in 2019, ‘Nessie expert’ Steve Feltham, who has spent 24 years watching the Loch, said he thought it was actually a giant Wels Catfish, native to waters near the Baltic and Caspian seas in Europe.

An online register lists more than 1,000 total Nessie sightings, created by Mr Campbell, the man behind the Official Loch Ness Monster Fan Club and is available at www.lochnesssightings.com.

So what could explain these mysterious sightings?

Many Nessie witnesses have mentioned large, crocodile-like scutes sitting atop the spine of the creature, leading some to believe an escaped amphibian may be to blame.

Some believe Nessie is a long-necked plesiosaur – like an elasmosaur – that survived somehow when all the other dinosaurs were wiped out.

Others say the sightings are down to Scottish pines dying and flopping into the loch, before quickly becoming water-logged and sinking.

Eventually, enough of these are gathered to propel the log upward as deep pressures begin altering its shape, giving the appearance of an animal coming up for air.