Mars’ Valles Marineris canyon, which is 20 TIMES WIDER and five times deeper than the Grand Canyon, is revealed in stunning photographs captured by European Space Agency

The massive Valles Marineris canyon has been revealed in stunning new images taken by the European Space Agency’s Mars Express.

At 2,485 miles long, over 124 miles wide and more than 4 miles deep, the Red Planet’s canyon makes America’s seem downright puny by comparison. Valles Marineris would span the distance from the northern tip of Norway to the southern tip of Sicily.

The new image depicts two trenches, or chasma, that form a portion of the western part of Valles Marineris. On the left is the 521-mile-long lus Chasma and on the right is the 500-mile-long Tithonium Chasma.

The picture uses data from the High Resolution Stereo Camera (HRSC) onboard Mars Express and it is a ‘true color’ image, meaning it shows what would be seen by the human eye if looking at this region of Mars.

This oblique perspective view of Tithonium Chasma (pictured above), which forms part of Mars’ Valles Marineris canyon structure, was generated from the digital terrain model and the nadir and color channels of the High Resolution Stereo Camera on the European Space Agency’s Mars Express.

The Red Planet’s massive canyon has been revealed in new images released by the ESA. The new image depicts two trenches, or chasma, that form a portion of the western part of Valles Marineris. On the left is the 521-mile-long lus Chasma and on the right is the 500-mile-long Tithonium Chasma 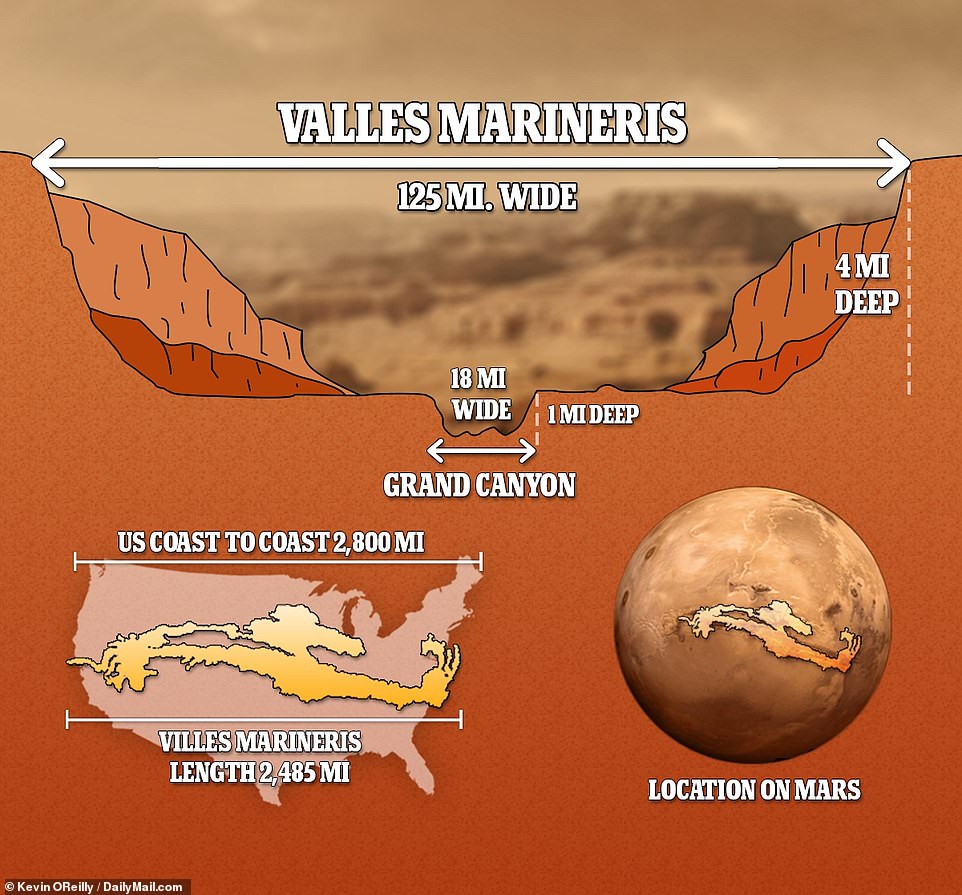 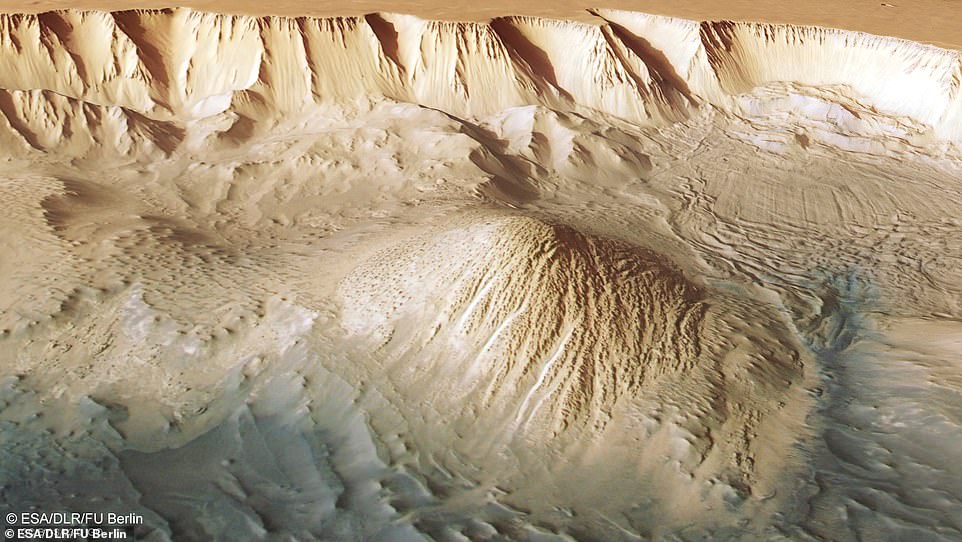 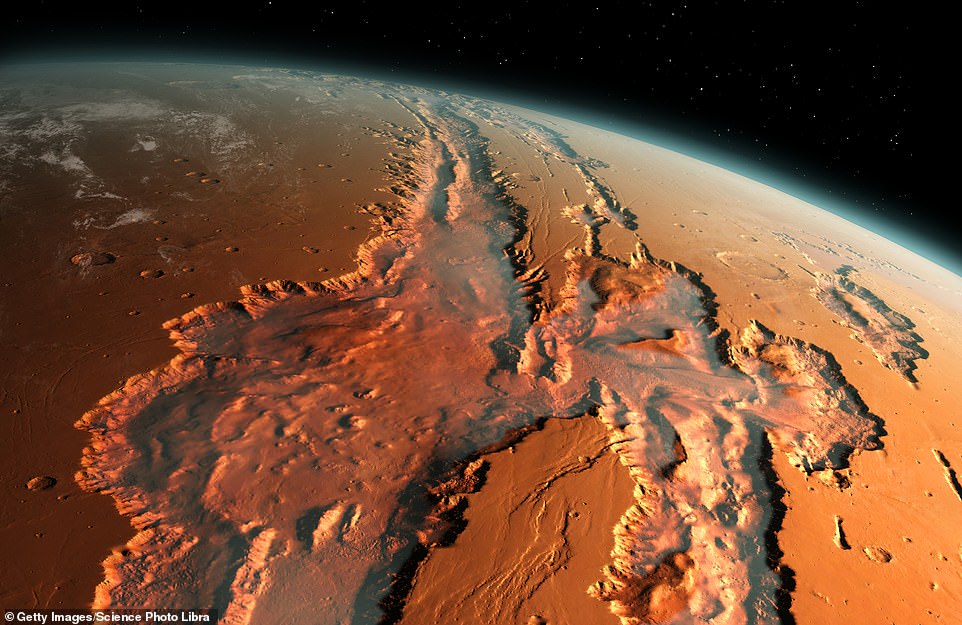 Pictured above is an illustration of an oblique view of the giant Valles Marineris canyon system on Mars. The canyons were formed by a combination of geological faulting, landslides, and erosion by wind and ancient water flows

When viewed in terms of elevation, the Alps’ tallest mountain Mont Blanc – rising over 15,000 feet above sea level – would be dwarfed if it was put inside Tithonium Chasma.

Unlike America’s Grand Canyon, which was formed about 5 million years ago as the Colorado River eroded rock away, the Red Planet’s massive canyon is believed to have formed by the drifting of tectonic plates.

At the top of Tithonium Chasma, a patch of dark sand – that may have come from a nearby volcanic region – brings color contrast to the image.

Next to the dark sand dunes are two light-toned mounds, one of which is cut in half by the upper image border. 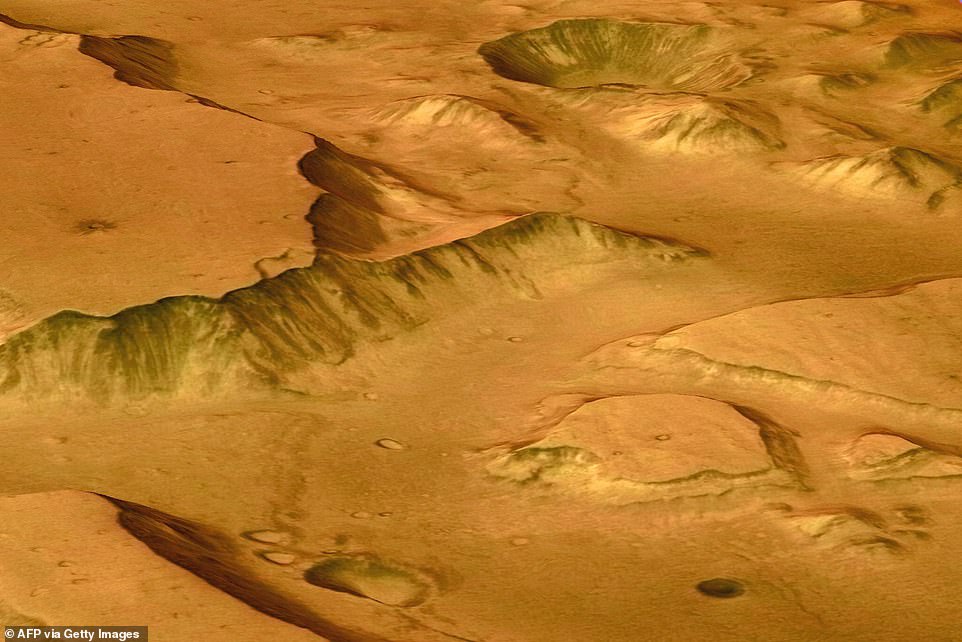 This picture taken by the Mars Express shows a perspective view of a mesa in the regions east of the Valles Marineris, the largest canyons in the Solar System 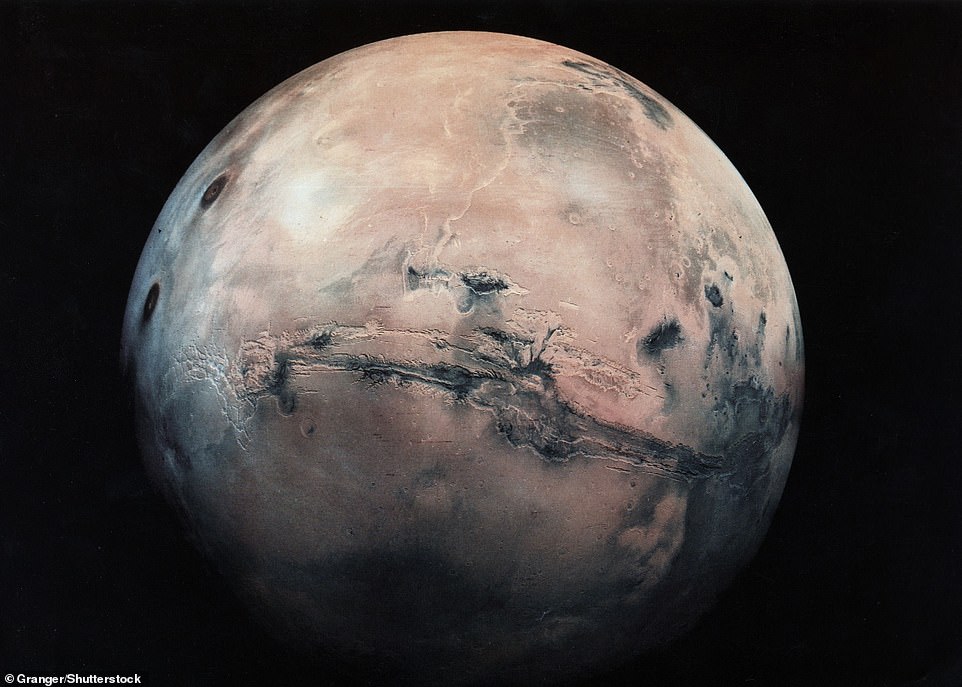 The Red Planet’s massive Valles Marineris – which stretches almost a quarter of the planet’s circumference, is seen above (middle) in this image from the Granger Collection 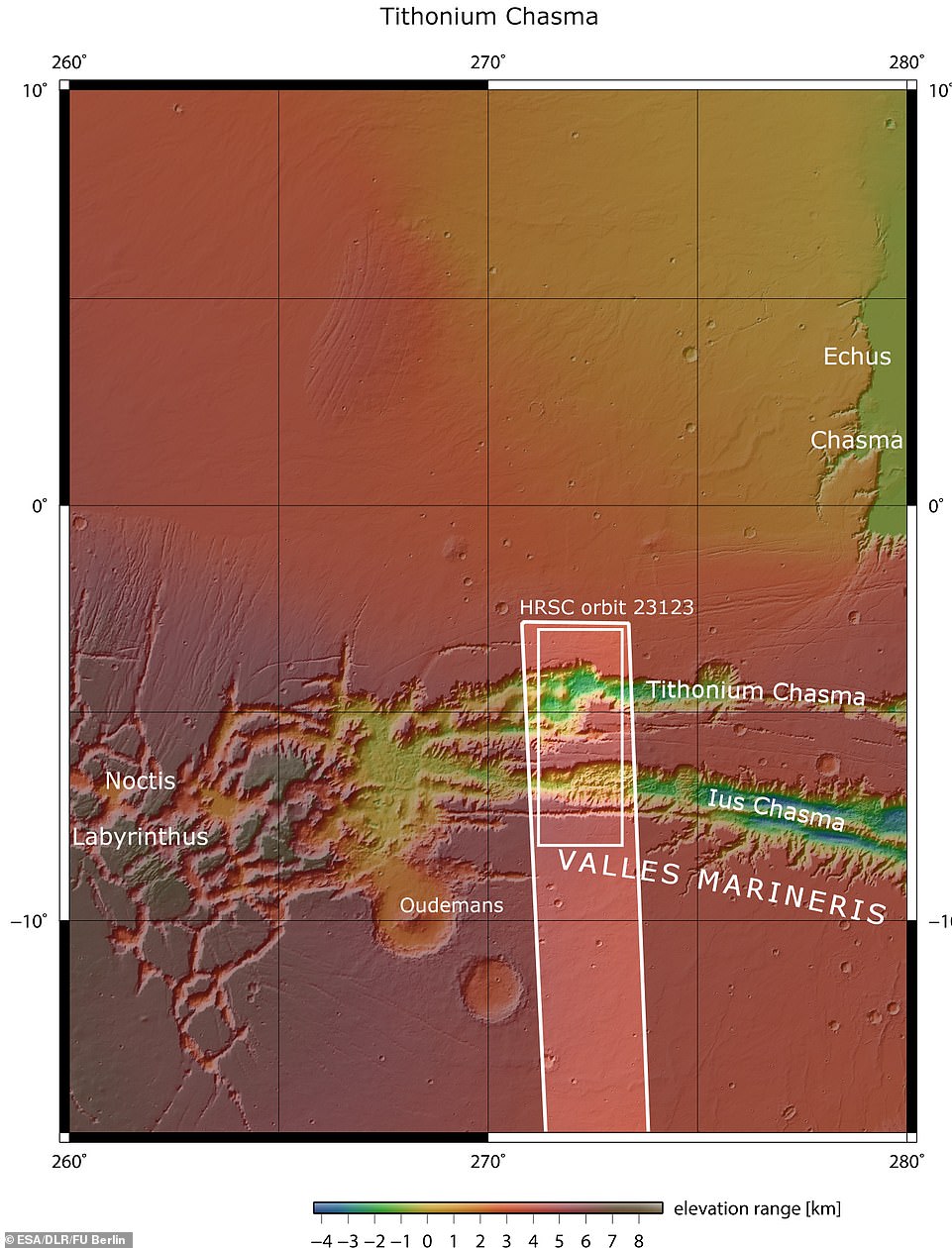 Lus and Tithonium Chasmata are seen above. The area outlined by the bold white box indicates the area imaged by the Mars Express High Resolution Stereo Camera on April 21, 2022 during orbit

Those mounds are actually gigantic, rising more than 9,800 feet in height. For perspective, Mount Hesperus in Alaska, which is highest peak of the Revelation Mountains, rises 9,828 feet.

The mounds’ surfaces have been significantly eroded by Mars’ strong winds: Typical wind speeds on the Red Planet average 125 miles per hour, with gusts reaching 300-375 miles per hour.

A series of smaller bumps can be seen in between the two large mounds.

The Mars Express has previously found water-bearing sulphate minerals in this region, according to the ESA.

The space agency says this suggests that the bumps formed when liquid that once filled the chasma evaporated – but this point is debated by scientists.

‘To the lower right of the mound that we see fully (upper right in the second perspective view), we can see parallel lines and debris piles that indicate a recent landslide,’ the ESA says in a statement.

That evidence can also be seen in the topography image below.

‘The landslide was caused by the collapse of the canyon wall on the right, and is likely to have occurred relatively recently because it has not been strongly eroded,’ the ESA explains.

‘The gnarly floor of Ius Chasma is equally fascinating.

‘As tectonic plates pulled apart, they appear to have caused jagged triangles of rock to form that look like a row of shark teeth.’

Over time, the rock formations have collapsed and eroded.

The ESA’s Mars Express has been orbiting the Red Planet since 2003 to conduct a wide range of scientific experiments, including imaging Mars’ surface, mapping its minerals, identifying the composition and circulation of its atmosphere and probing beneath its crust.

NASA’s Mars Perseverance Rover has been exploring the Red Planet for almost a year and a half. The American space agency wants to send humans to Mars in the 2030s.

Elon Musk, the founder of SpaceX, has long said that humans must colonize Mars and become a multi-planetary species in order to preserve consciousness and extend it into the cosmos.

Pictured above: A color-coded topographic image showing Ius and Tithonium Chasmata, which form part of Mars’ Valles Marineris canyon structure, that was created from data collected by ESA’s Mars Express 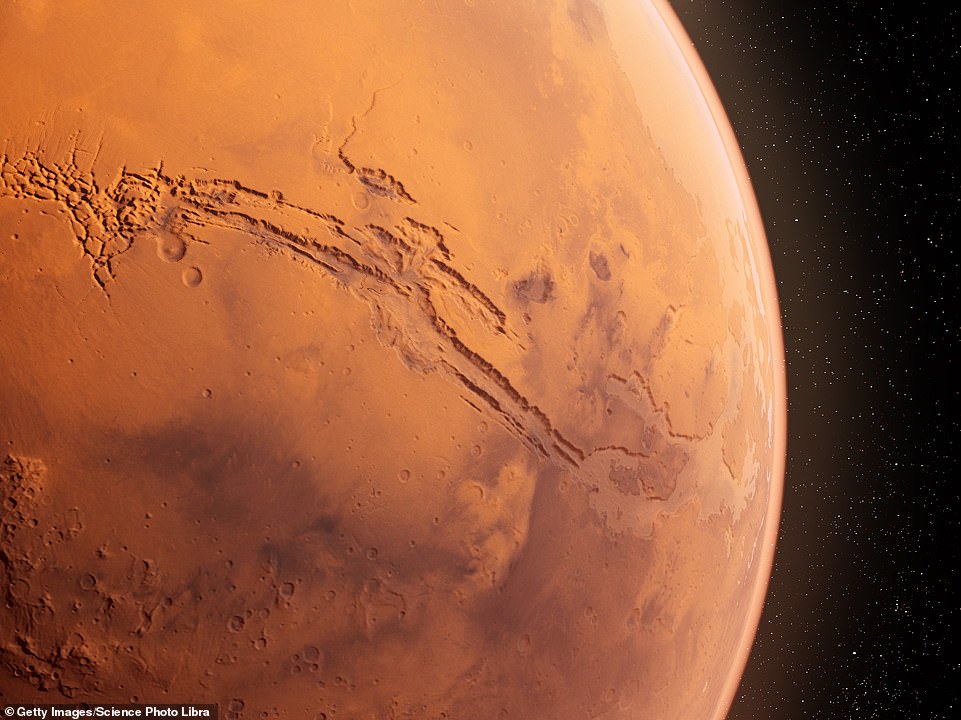 Pictured above is a computer illustration of the Valles Marineris canyon on the Red Planet, which is the biggest canyon in the solar system