What a way to croak it! Ancient swamp in Germany was a sex death trap for hundreds of FROGS 45 million years ago, study finds

An ancient swamp in Germany was a sex death trap for hundreds of frogs 45 million years ago, a new study shows.

Researchers have analysed frog fossils found in the Geiseltal area in central Germany, which was once a swampy subtropical forest.

Geiseltal was once home to more than 50,000 ancient beasts, including birds, horses, bats, fish and hundreds of frogs.

Researchers say the ancient frogs were killed during mating – a phenomenon that still occurs today for species that mate in water.

Female frogs can drown when a male is on top of them, or can even die of exhaustion from the sheer physical effort of courtship.

Ancient frogs’ bodies would then have sunk to the bottom of the lake, where they were broken in two by strong currents and finally fossilised, the team say. 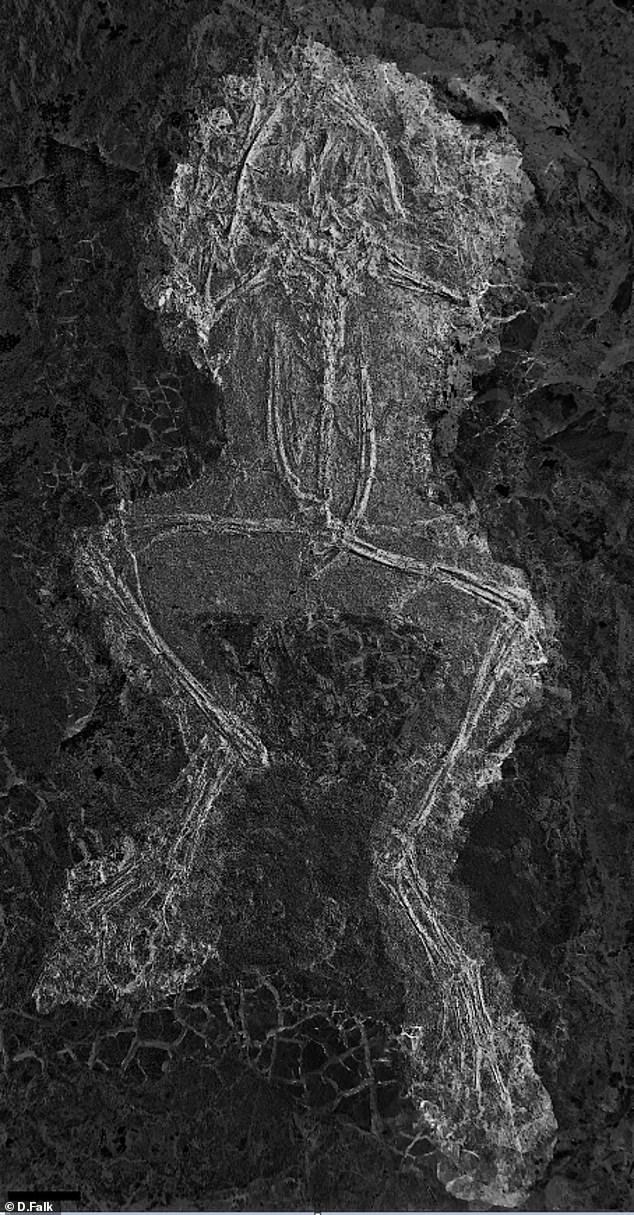 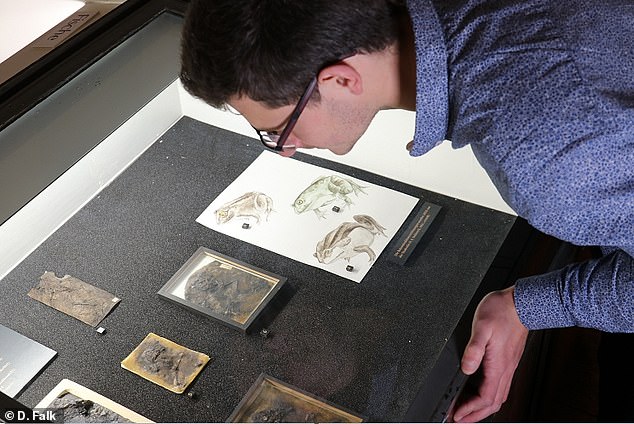 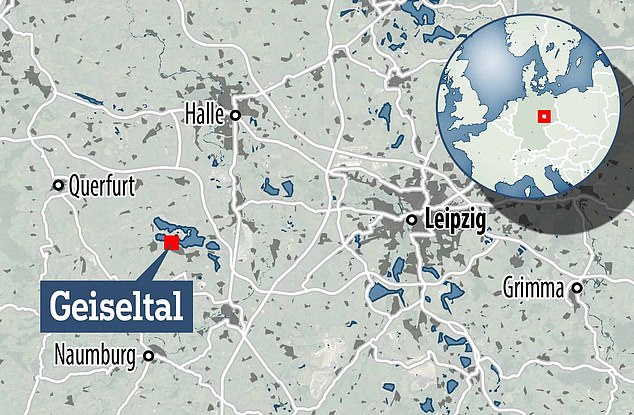 The Geiseltal area in central Germany was once a swampy subtropical forest, home to a variety of species

GEISELTAL WAS A SUBTROPICAL SWAMP

Because of its unique geological features and thousands of fossils, the former coalfield of Geiseltal in Saxony-Anhalt is considered a ‘scientific treasure trove’.

It provides a unique window into how the Earth’s plants and animals evolved over millions of years.

It was home to more than 50,000 ancient beasts, including birds, horses, bats, fish and hundreds of frogs.

The new study was conducted by palaeontologists at the University College Cork (UCC) and published in the journal Papers in Palaeontology.

The experts say modern day frogs die during ‘explosive breeding’ – where many males gather and compete for a small number of females over a few days.

‘Female frogs are at higher risk of drowning as they are often submerged by one or more males,’ said senior author Professor Maria McNamara.

‘This often happens in species that engage in mating congregations during the short explosive breeding season.

‘What’s really interesting is that fossil frogs from other sites also show these features, suggesting that the mating behaviours of modern frogs are really quite ancient and have been in place for at least 45 million years.’

Nearly 50 million years ago, during the middle Eocene, the Earth was much warmer and the area of Geiseltal was a swampy subtropical forest.

Inhabitants included ancestors of the horse, large crocodiles, as well as giant snakes, lizards, ground-dwelling birds and plenty of anurans (frogs and toads).

Previous studies have suggested that the Geiseltal frogs died after lakes dried up or oxygen depletion in the water.

But the new analysis of the fossils revealed the frogs were healthy when they died.

‘The bones don’t show any signs of predators or scavengers – there’s also no evidence that they were washed in during floods, or died because the swamp dried up.’ said study author Daniel Falk.

Most of the Geiseltal fossil frogs are species that spend their lives on land, returning to the water only to breed, so the only explanation is that they died during mating, Falk added. 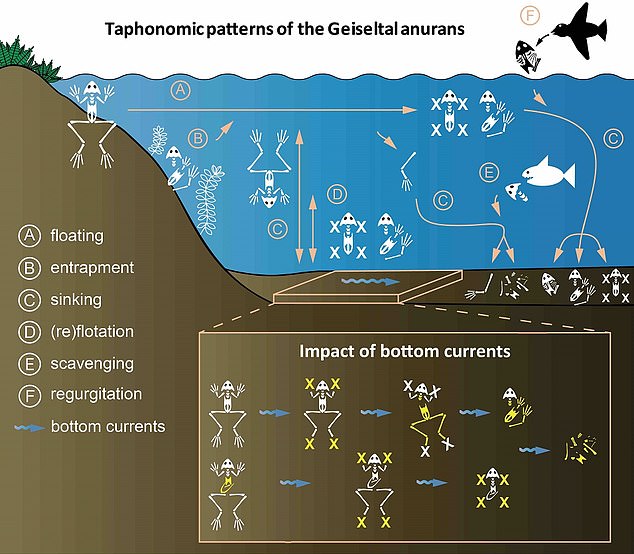 Ancient frogs’ bodies would have sank to the bottom of the lake after drowning, where they were broken into two by strong currents and fossilised

In their study, the team have cast doubt on many theories of how the frogs died from previous studies, including poisoning by algal blooms, freezing and starvation.

However, death by old age cannot be excluded as a cause of death of at least some specimens, the researchers add.

‘The specimens represent a wide range of sizes and presumably ages,’ they say in their paper.

‘Collectively, these data suggest that many Geiseltal anurans represent mating-related deaths, at least some of which may have occurred in mass mortalities.’

MALE FROGS SQUEEZE A DEAD FEMALE TO EXTRACT HER EGGS

In the Amazon, male frogs squeeze a dead female to extract her eggs, a 2013 study in the Journal of Natural History revealed.

They extract oocytes from the abdomens of unfortunate females killed in mating struggles, and then fertilize them.

From an evolutionary perspective taking advantage of oocytes from dead females minimises the losses both partners can experience as a result of what’s known as ‘explosive breeding’.

Explosive breeding is where many males gather and compete for a small number of females over a few days.

The male is able to breed successfully despite not having had access to a live female or expending too much energy in the battle to secure one; the female’s eggs are fertilised even though she herself is dead.

During explosive breeding, males can become exhausted from the competition and search for a scarce mate, or from trying to dislodge other males from receptive females.

The females themselves can be unintentionally crushed, drowned or simply exhausted under the weight of their many suitors.