Scientists at the Large Hadron Collider have announced the discovery of three new ‘exotic particles’ that could help to explain how our universe was formed.

Atoms contain smaller particles called neutrons and protons, which are made up of three quarks each, while this ‘exotic’ matter is made up of four and five quarks – known as tetraquarks and pentaquarks.

The particles discovered are one new pentaquark and two tetraquarks, taking the total number found at the Large Hadron Collider in Switzerland to 21.

Researchers are excited about their new findings because there are now enough of these particles to begin grouping them together in a way that is similar to the chemical elements in the periodic table.

‘Finding exotic particles and measuring their properties will help theorists develop a model of how these particles are built, the exact nature of which is largely unknown,’ according to Chris Parkes, professor of experimental particle physics at the University of Manchester.

‘It will also help to better understand the theory for conventional particles such as the proton and neutron.’

The latest discovery comes almost exactly 10 years after the the Large Hadron Collider’s discovery of the famous Higgs boson, dubbed the ‘God Particle’. 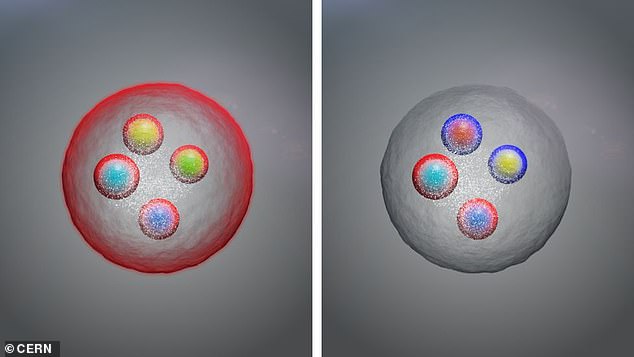 Enlightening: Scientists at the Large Hadron Collider have announced the discovery of three new ‘exotic particles’ that could help to explain how our Universe was formed 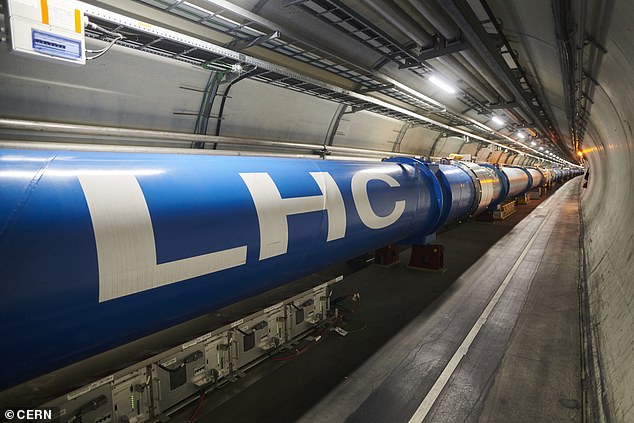 CERN is one of the largest scientific institutions in the world, home to over 2,000 scientists working on many physics projects. Pictured above is a chain of LHC dipole magnets inside a tunnel at the end of the second long shutdown, when the facility at CERN was updated for a few years so that protons could be slammed together at much higher energy ranges when run 3 begins in July

The Higgs boson is an elementary particle – one of the building blocks of the universe according to the Standard Model of particle physics.

It was named after physicist Peter Higgs as part of a mechanism that explains why particles have mass.

According to the Standard Model our universe is made of 12 matter particles – including six quarks and six leptons.

It also has four forces – gravity, electromagnetism, strong and weak.

Each force has a corresponding carrier particle known as a boson that acts on the matter.

The theory went that the Higgs boson was responsible for transferring mass.

It was first proposed in 1964 and wasn’t discovered until 2012  – during a run of the Large Hadron Collider.

The discovery was significant as if it had been shown not to exist then it would have meant tearing up the Standard Model and going back to the drawing board.

Exotic particles were first hypothesised by theorists about six decades ago, but only in the past 20 years have they been observed by Large Hadron Collider and other experiments.

Quarks are elementary particles and come in six flavours: up, down, charm, strange, top and bottom.

They usually combine together in groups of twos and threes to form hadrons, such as the protons and neutrons that make up atomic nuclei.

More rarely, however, they can also combine into four-quark and five-quark particles, or ‘tetraquarks’ and ‘pentaquarks’. Particles made of quarks are known as hadrons.

While some theoretical models describe exotic hadrons as single units of tightly bound quarks, other models envisage them as pairs of standard hadrons loosely bound in a molecule-like structure.

Only time and more studies of exotic hadrons will tell if these particles are one, the other or both.

Most of the exotic hadrons discovered in the past two decades are tetraquarks or pentaquarks containing a charm quark and a charm antiquark, with the remaining two or three quarks being an up, down or strange quark or an antiquark.

But in the past two years, the Large Hadron Collider has discovered different kinds of exotic hadrons.

And last year it found the first-ever instance of a ‘double open-charm’ tetraquark with two charm quarks and an up and a down antiquark.

Open charm means that the particle contains a charm quark without an equivalent antiquark.

The discoveries announced today by the Large Hadron Collider team include new kinds of exotic hadrons.

The first kind, observed in an analysis of ‘decays’ of negatively charged B mesons, is a pentaquark made up of a charm quark and a charm antiquark and an up, a down and a strange quark.

It is the first pentaquark found to contain a strange quark, while the second kind is a doubly electrically charged tetraquark.

It is an open-charm tetraquark composed of a charm quark, a strange antiquark, and an up quark and a down antiquark, and it was spotted together with its neutral counterpart in a joint analysis of decays of positively charged and neutral B mesons.

The results, which were presented at a CERN seminar, will help physicists better understand how quarks bind together into these composite particles.

The news comes a day after the 10th anniversary of the discovery of the Higgs Boson on July 4. 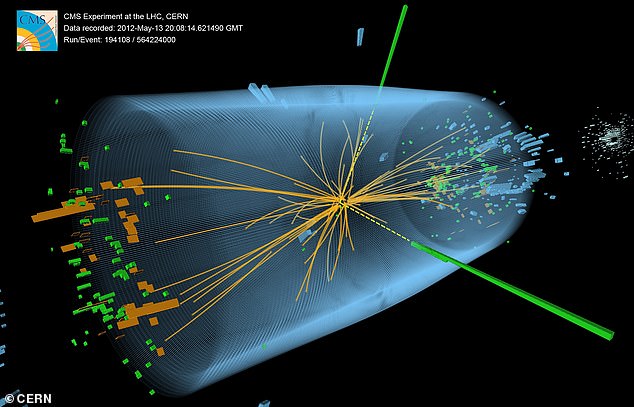 The discovery of the Higgs Boson in July 2012 forms the basis for the existence of all elementary particles in our universe. Pictured above is a visualisation of an event recorded at the CMS detector at the Large Hadron Collider at CERN. It shows the characteristics expected from the decay of the SM Higgs Boson to a pair of photons 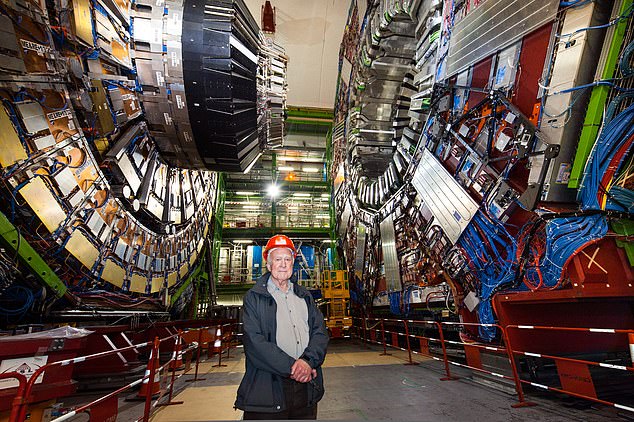 The discovery of the Higgs boson in 2012 led to global headlines and the award of Nobel Prizes to, among others, the British theorist Peter Higgs.

Higgs had first predicted the existence of the particle in the 1960s, and theorised that we are surrounded by an ocean of quantum information known as the Higgs Field.

Since its discovery, experiments at the Large Hadron Collider have probed the properties of this bizarre particle, which is so unstable it has never been directly observed.

The existence of the Higgs Boson is one reason why everything we see, including ourselves, all planets and stars, has mass and exists – hence why it was called the ‘God Particle.’

The Large Hadron Collider beauty (LHCb) collaboration, which made the new discovery, is comprised of more than 1,000 scientists from 20 countries across the world.

The collaboration built and operates one of the four big detectors at the CERN LHC particle collider.

It is led by Professor Parkes and the University of Manchester, which has more than 20 members of staff and PhD students working on the project.

WHAT IS THE LARGE HADRON COLLIDER?

The Large Hadron Collider (LHC) is the world’s largest and most powerful particle accelerator.

It is located in a 27-kilometer (16.8-mile) tunnel beneath the Swiss-French border.

The LHC started colliding particles in 2010. Inside the 27-km LHC ring, bunches of protons travel at almost the speed of light and collide at four interaction points.

Inside the accelerator, two high-energy particle beams travel at close to the speed of light before they are made to collide. The beams travel in opposite directions in separate beam pipes.

They are guided around the accelerator ring by a strong magnetic field maintained by superconducting electromagnets. 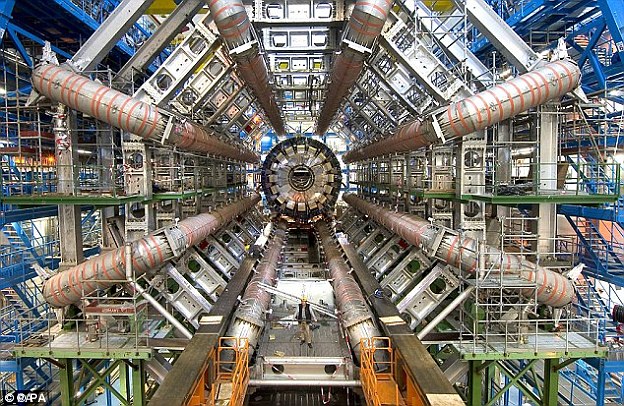 The LHC (pictured) was restarted on April 5th 2015, having been turned off for two years during a major renovation project that cost £100 million

The electromagnets are built from coils of special electric cable that operates in a superconducting state, efficiently conducting electricity without resistance or loss of energy.

These collisions generate new particles, which are measured by detectors surrounding the interaction points. 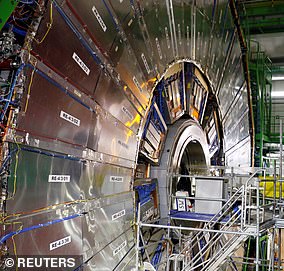 By analysing these collisions, physicists from all over the world are deepening our understanding of the laws of nature.

While the LHC is able to produce up to 1 billion proton-proton collisions per second, the HL-LHC will increase this number, referred to by physicists as ‘luminosity’, by a factor of between five and seven, allowing about 10 times more data to be accumulated between 2026 and 2036.

This means that physicists will be able to investigate rare phenomena and make more accurate measurements.

For example, the LHC allowed physicists to unearth the Higgs boson in 2012, thereby making great progress in understanding how particles acquire their mass. The subatomic particle had long been theorised but wasn’t confirmed until 2013.