Antarctic fish growing grotesque skin tumors thanks to climate change is resulting in a disease outbreak among the creatures, study shows

A large number of Antarctic fish have been found with grotesque skin tumors due to an outbreak never before seen in the polar region.

Researchers with the University of Ohio (UO) believe the parasitic illness is spreading as a result of climate change altering the environment.

The tumors are ‘pale, pink, raised, rough, and appeared at various places on the trunk and head, in some cases covering more than a third of the body surface,’ according to the study published by researchers at the University of Ohio.

Thomas Desvignes, chief scientist during the research expedition in 2018 and lead author on the study, said in a statement: ‘When life conditions become challenging, animals become more prone to disease.

The changing conditions include rising air temperatures and melting glaciers.

‘Waters of the Southern Ocean have been environmentally stable and chronically cold, hovering near the freezing point for the past 15–20 million years,’ the team shared in the study published in the journal iScience.

‘The climate in Antarctica, however, is rapidly changing with rising air temperatures and melting glaciers contributing to warmer and fresher bottom waters.’

The study continues to explain that ‘strong abiotic stressors are already affecting the highly endemic and specialized Antarctic fauna, causing a cascade of responses from molecular to community levels.’

A large number of Antarctic fish have been found with grotesque skin tumors due to an outbreak never before seen in the polar region. Pictured are fish collected from Andcord Bay

Desvignes, along with UO biologist John Postlethwait, visited a small fjord on the West Antarctic Peninsula to study a unique group of fish, called notothenioids.

The team was intrigued by this fish because it flocked to the Antarctic Ocean from the Atlantic and evolved to withstand the frigid waters.

This includes developing a specialized protein that prevents their blood from freezing.

The fjord is typically filled with eyes at the time of year the team visited, but due to rising temperatures, they were able to venture right in and begin fishing.

Researchers with the University of Ohio (UO) believe the parasitic illness is spreading as a result of climate change altering the environment. This fish was collected from Dallmann Bay 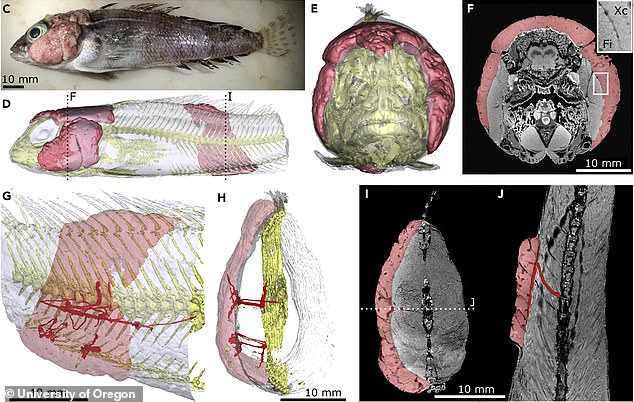 The tumors are ‘pale, pink, raised, rough, and appeared at various places on the trunk and head, in some cases covering more than a third of the body surface’

The scientists studied specimens in Andcord Bay and Dallmann Bay.

‘As soon as we got the first trawl back on deck, we realized that one species was really abundant, and a lot of them had big tumors,’ Desvignes said.

‘When we saw that, we immediately realized we had to do something.’

The team collected several infected fish and brought them back to a lab for a further analysis.

Here they determined he parasites causing the tumors belonged to a different genus than other parasites implicated in previous X-cell disease cases.

‘It can be difficult to pin a disease outbreak on a specific cause. But Antarctic ecosystems are particularly vulnerable to the effects of climate change and are seeing especially rapid changes,’ according to the researchers.

‘As ice melts, for example, the nearby water becomes less salty. And the bottom water where these notothenioids live is becoming warmer and fresher especially fast.’

Desvignes suggests the fish may be feeling pressure as waters are warming and ecosystems are shifting.

‘Climate change could also affect the parasite’s life cycle, perhaps making it more effective at spreading and infecting,’ he said.

Other non-climate-related explanations could account for the outbreak, too, but the team said there needs more data to before they can narrow down a hard conclusion.

‘Maybe the parasite has a long life cycle and only manifests into a disease outbreak every so often, and we might have been there by chance when that was happening,’ Desvignes said.

‘Due to COVID-19 and the challenging logistics of visiting Antarctica, they haven’t been able to return to the area since then.

‘We’re preparing project proposals to go there again and study this specific outbreak, how it evolved since 2018, and explore adjacent areas to try to see whether we can detect the pathogen elsewhere and in other species,’ Desvignes said.