Hampshire zookeepers have been celebrating the birth of a rare Przewalski’s foal which previously went extinct in the wild for nearly 40 years.

The male foal, named Basil, was born to parents Nogger and Speranzer at Marwell Zoo near Winchester, Hampshire, on May 28, but keepers only shared the happy news today.

Marwell staff say the new arrival is especially exciting as the Przewalski’s horse (pronounced ‘shur-val-skee’) went extinct in the wild from 1969 until 2008.

The endangered species is native to the steppes of Central Asia and was almost hunted into oblivion by humans before reintroduction programmes in the last 30 years brought it back from the brink. 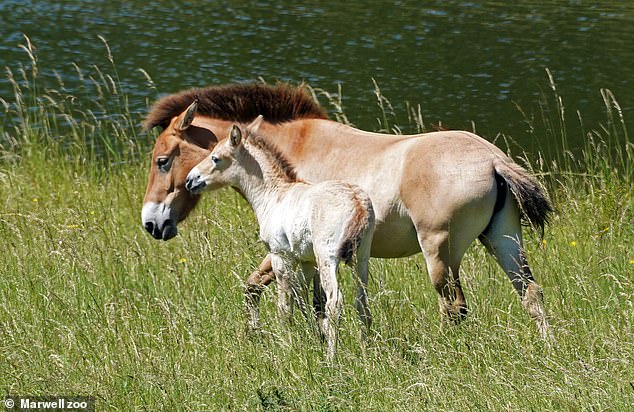 The male foal Basil was born to parents Nogger and Speranzer at Marwell Zoo near Winchester, Hampshire, on May 28. He’s pictured here at Marwell with mum Speranza 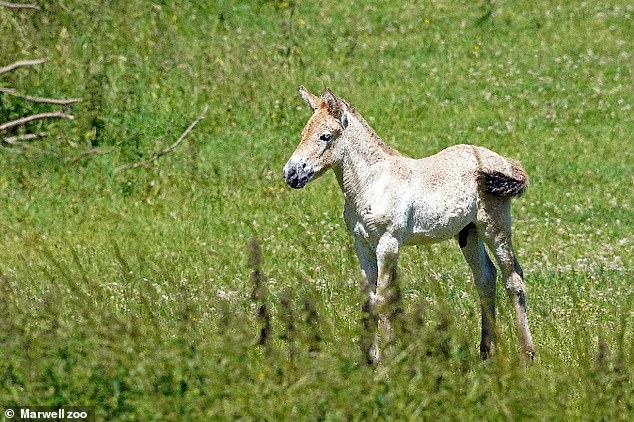 According to keepers, the new youngster is staying close to its mother and the females of the herd are being protective

The Przewalski’s wild horse (pronounced ‘shur-val-skee’) is the only living true wild horse.

It’s a stocky, short-maned species named after Russian explorer Nikolay Przhevalsky, who described the animal after encountering it in the wild.

By 1969 this species was extinct in the wild. All Przewalski’s horses alive today are descended from a founding population of nine horses held in two zoos.

Captive breeding programmes has increased the population to around 2,000 individuals.

They live in harem groups led by a dominant stallion. Foals are able to stand as soon as one hour after birth.

Unlike other species of horse that are sometimes described as ‘wild’, the Przewalski’s horse (Equus przewalskii) is the only species considered by conservationists to be truly wild, rather than simply ‘feral’, as it is not descended from domesticated horses.

Basil senior was born in 1963 and joined Marwell in prior to the zoo opening 50 years ago, before moving on to San Diego Zoo.

The naming of the new foal is a nod to Marwell’s 50th anniversary, which the zoo is celebrating this year.

A zoo spokeswoman told MailOnline: ‘He arrived prior to Marwell opening its doors in 1969 and was one of the animals on show when the zoo opened in 1972.’

According to keepers, the new youngster is staying close to its mother and the females of the herd are being protective.

Przewalski’s foals weigh between 25 and 30kg at birth. They can stand and walk within an hour of being born, and within a few weeks they are able to start to graze.

‘The male foal will go on to be an important part of the European ex-situ breeding programme,’ the zoo said in a statement.

In June last year, a Przewalski’s horse foal was born at Marwell called Altan. Unfortunately, Altan had to be euthanised due to health problems.

‘Altan was born with a health condition that our animal and veterinary teams monitored for a few months as well as consulting external equine and veterinary experts,’ the Marwell spokesperson told MailOnline.

‘The difficult decision to euthanase was made when it became clear his condition wasn’t going to improve.’

Przewalski’s horse is a stocky, short-maned species named after Russian explorer Nikolay Przhevalsky, who first described the animal after encountering it in the wild.

In the mid 18th century wild Przewalski’s horses would have been found from the Russian Steppes east to Kazakhstan, Mongolia and northern China.

But it became endangered during the middle of the last century when the species experienced a population bottleneck – an evolutionary event in which many or most members of a population or a species die. 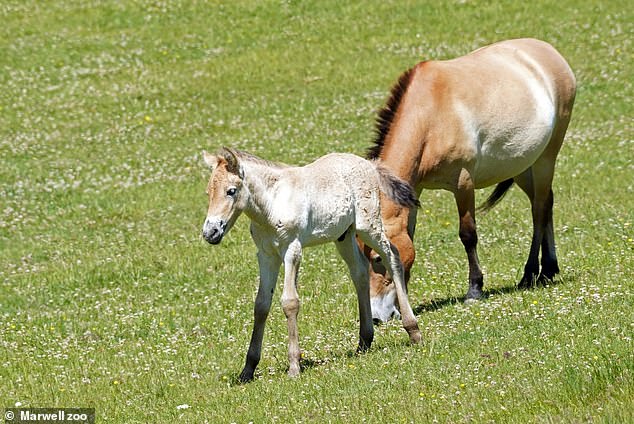 Marwell Zoo said: ‘These horses were extinct in the wild from 1969 until 2008, so the birth is exciting for this Endangered species’

Przewalski’s horses were also hunted for food, and their natural habitat, the steppes, were converted into farmland, giving them nowhere to live and breed.

By the 1960s, the wild horses were no longer free – only one captive population remained, descended from about a dozen wild-caught individuals and four domesticated horses.

Przewalski’s horses were spotted in Mongolia in the 1980s but became extinct in their native habitat about that same time, according to San Diego Zoo. 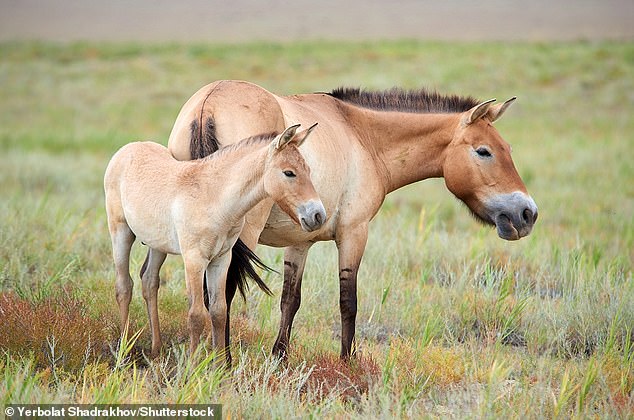 Pictured are two Przewalski horses in the Altyn Emel National Park in Kazakhstan. In the mid 18th century wild Przewalski’s horses would have been found from the Russian Steppes east to Kazakhstan, Mongolia and northern China

Thanks to major conservation efforts, the current population of Przewalski’s horses numbers over 2,000 individuals, with about a quarter living in reintroduction reserves.

Unlike in former times, Przewalski’s horses are today worshipped as ‘holy animals’ in the Gobi Desert. They are fully protected and are no longer hunted by humans.

The species is listed as endangered on the International Union for the Conservation of Nature’s (IUCN) Red List of Threatened Species, although populations are increasing thanks to zoo breeding programmes.

Keepers asked ZSL conservationists working in Mongolia to name the female foal, who is now called Sooton, meaning ‘sassy and vigilant’ in Mongolian.

Reintroduced Przewalski’s horses have a different diet, a 2017 study found.

Researchers at the University of Veterinary Medicine, Vienna found that before their extinction in the wild Przewalski’s horses were on a mixed diet.

In summer, they only ate grass, but in winter they also ate less nutritious bushes.

After their reintroduction, the animals only eat high-quality grass throughout the year.

‘We explain this dietary shift by an improved human attitude,’ said Martina Burnik Šturm, one of the lead authors, at the time.

‘In the past, humans considered Przewalski’s horses as pasture competitors and hunted them as a food source.

‘The nutritious pastures were reserved for domestic sheep and cattle. Thus, access to pastures in winter was difficult for wild horses. Shrubs and bushes were the only alternative.’

Unlike in former times, Przewalski’s horses are today worshiped as ‘holy animals’ in the Gobi Desert. They are fully protected and are no longer hunted by humans.

Essentially, the species horses can now feed on grass throughout the year because humans allow it.