SpaceX and Virgin Galactic space ships could destroy the ozone layer again: Soot particles from the rockets could reverse regrowth of the shield that protects life on Earth from UV rays, study finds

SpaceX and Virgin Galactic have sparked a new era of space travel and although these joy rides to the final frontier are exciting, they have a dark side that is accelerating climate change, a new study reveals.

A team of scientists, led by the University of London College, found that black carbon particles emitted by rockets are almost 500 times more efficient at holding heat in the atmosphere than all other sources of soot combined – and this is enhancing global warming.

The findings are based on all rocket launches and re-entries in 2019, along with projected space tourism scenarios based on the recent billionaire space race.

Researchers found, under a scenario of daily or weekly space tourism rocket launches, the impact on the stratospheric ozone layer threatens to undermine the recovery experienced after the successful implementation of the Montreal Protocol.

And this is mainly due to Elon Musk’s SpaceX’s use of kerosene and Richard Branson’s Virgin Galactic’s hybrid synthetic rubber fuel, according to researchers. 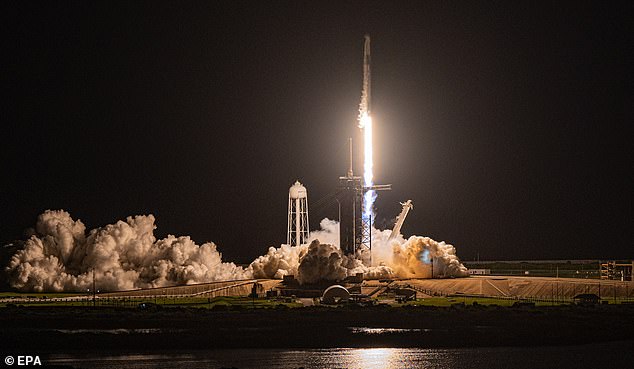 SpaceX (pictured) and Virgin Galactic have sparked a new era of space tourism and although these joy rides to the final frontier are exciting, they have a dark side that is accelerating climate change. Pictured is the launch of an all-civilian crew into space on Sept 16, 2021

The Montreal Protocol, established in 1987, is an international treaty that protects the stratospheric ozone layer by phasing out the production and consumption of ozone-depleting substances (ODS).

The treaty came about to mend a giant hole in the ozone layer that appeared in the early 1980s. 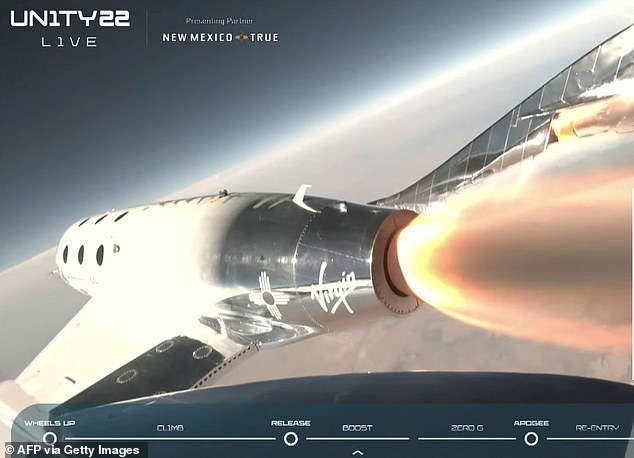 A team of scientists, led by the University of London College, found that black carbon particles emitted by rockets are almost 500 times more efficient at holding heat in the atmosphere than all other sources of soot combined. Pictured is Virgin Galactic’s rocket 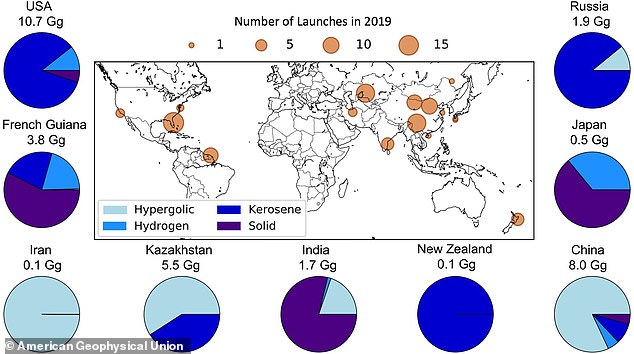 The findings are based on all rocket launches and re-entries in 2019, along with projected space tourism scenarios based on the recent billionaire space race

Average people have been traveling to space since 2001 – the first was millionaire Dennis Tito – but there has been a boom of tourists in just the past year.

And this is due to SpaceX, Blue Origin and Virgin Galactic for making commercial flights possible.

Jeff Bezos’ Blue Origin have launched six tourists, including himself, in total, while Virgin Galactic also sent its founder Branson and five other passengers on July 11 and SpaceX sent four passengers on September 16, 2021 – Musk has yet to go to space.

Branson’s company, however, has sold at least 600 tickets for flights aboard its commercial launches to space.

With many more launches on the horizon, scientists are looking to see what damage this could have on our environment.

Study co-author Dr Eloise Marais (UCL Geography) said in a statement: ‘Rocket launches are routinely compared to greenhouse gas and air pollutant emissions from the aircraft industry, which we demonstrate in our work is erroneous.

‘Soot particles from rocket launches have a much larger climate effect than aircraft and other Earth-bound sources, so there doesn’t need to be as many rocket launches as international flights to have a similar impact.

‘What we really need now is a discussion amongst experts on the best strategy for regulating this rapidly growing industry.’ 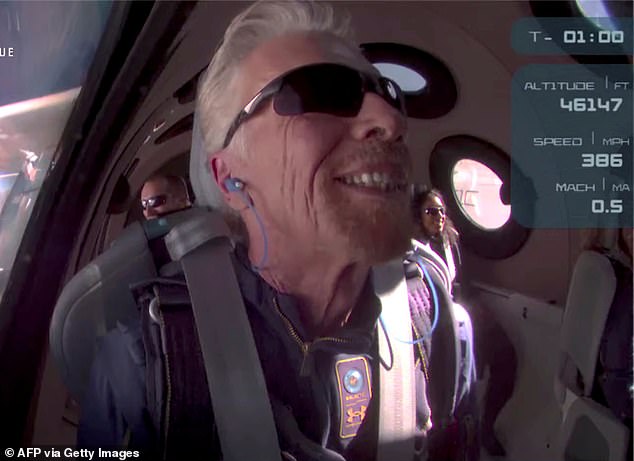 This is mainly due to Elon Musk’s SpaceX’s uses of kerosene and Richard Branson’s Virgin Galactic’s hybrid synthetic rubber fuels, according to researchers. Pictured is Branson last year during his space tourist flight 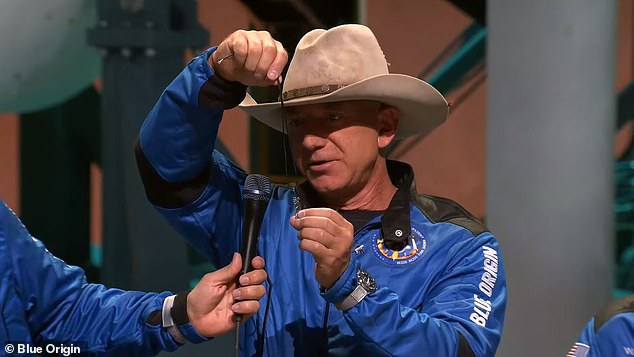 Jeff Bezos’ Blue Origin have launched six tourists, including himself, in total

Study co-author Dr. Robert Ryan said: ‘The only part of the atmosphere showing strong ozone recovery post-Montreal Protocol is the upper stratosphere, and that is exactly where the impact of rocket emissions will hit hardest.

‘We weren’t expecting to see ozone changes of this magnitude, threatening the progress of ozone recovery.

‘There is still a lot we need to find out about the influence of rocket launch and re-entry emissions on the atmosphere — in particular, the future size of the industry and the types and by-products of new fuels like liquid methane and bio-derived fuels.

‘This study allows us to enter the new era of space tourism with our eyes wide open to the potential impacts.

‘The conversation about regulating the environmental impact of the space launch industry needs to start now so we can minimize harm to the stratospheric ozone layer and climate.’