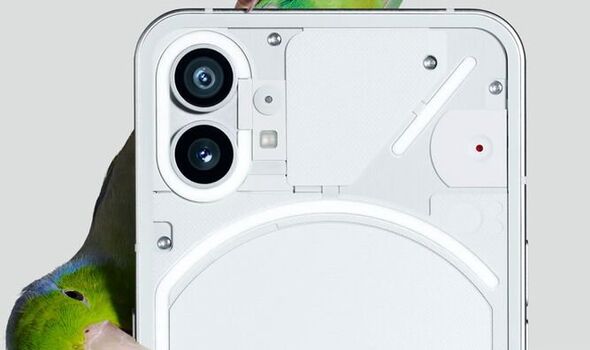 Android lovers will have a new gadget to pop in their pockets from next month with fledgling technology brand, Nothing, launching its very first smartphone. This device, called the Nothing phone (1), will officially launch on July 12 but the firm has already teased plenty of features ahead of its full release including a striking design with a clear rear panel that lets users see inside the device.

There’s also a bright new upgrade called the Glyph Interface which uses lights embedded under the see-through panel to reveal different alerts such as calls and text messages.

The Glyph Interface can even be programmed so the lights flash in unique patterns depending on who is calling and there’s a way to view charging status without looking at the screen. Images released by Nothing also show a dual-lens camera and it’s thought the phone will be powered by a Qualcomm processor.

Along with its radical design on the outside, Nothing has also given fans a glimpse of how things will look when the power button is tapped with the firm launching a unique version of Android called Nothing OS.

This brings an appearance that features striking black wallpapers and a digital-style font along with something called Max Icons and Max Folders which is a new experience for Android.

This allows users to hold and press to enlarge app folders or individual apps, so the things you use the most are more visible

There are also bespoke Clock and Weather widgets plus the option to customise the home screen with Nothing wallpapers and the associated colour palette.

If all this sounds exciting then full details will be revealed in a couple of weeks but for those brave enough to take the plunge ahead of an official release there is a way to get hold of the Nothing phone (1) before anyone else.

Nothing has just opened a public waitlist for the invite-only pre-orders of phone (1) before the general release. All you have to do is head to the Nothing website and create an account. Then simply register to get on the waitlist for an invite. When you get the invite, it guarantees your spot to order phone (1) from 12 July with Nothing also promising that it will unlock an exclusive reward.

It’s worth noting that those wanting to wait and see how this device looks in the flesh before buying it will find it stocked in O2 stores. The UK network is the exclusive partner of Nothing and will be offering it on contract later next month.

If you’re wondering where Nothing has come from and why so many people are now talking about it there’s an easy answer. The brand has been created by tech entrepreneur Carl Pei who originally co-founded the hugely successful OnePlus brand. He left that company back in 2019 and is now hoping to replicate the success with Nothing. The firm has already launched some earbuds called the Nothing ear (1) and it won’t be long until we find out if its phone can really take on bigger rivals such as Samsung