Let’s go fly a kite! UK sends red kite chicks to SPAIN to boost dwindling population in return for reintroduction scheme that has seen number of breeding pairs soar to 6,000 in Britain

Red kite chicks are to be sent to Spain where their population is dwindling, after a successful reintroduction scheme saw numbers skyrocket in Britain.

The birds of prey were initially imported to England and Scotland from Spain over 30 years ago, as part of a scheme to reintroduce the species after it became extinct in the countries in the 1870s.

Thanks to the efforts of conservationists, there are now estimated to be around 6,000 breeding pairs across the country.

However, breeding populations in Spain are known to be in decline due to a legacy of illegal poisonings, wildlife experts said.

A new scheme from the RSPB and Accion por el Mundo Salvaje in Spain will see 30  wild red kite chicks a year for three years shipped across.

It is hoped the results of the UK’s reintroduction scheme, which is said to be the country’s most successful bird conservation project to date, will be replicated. 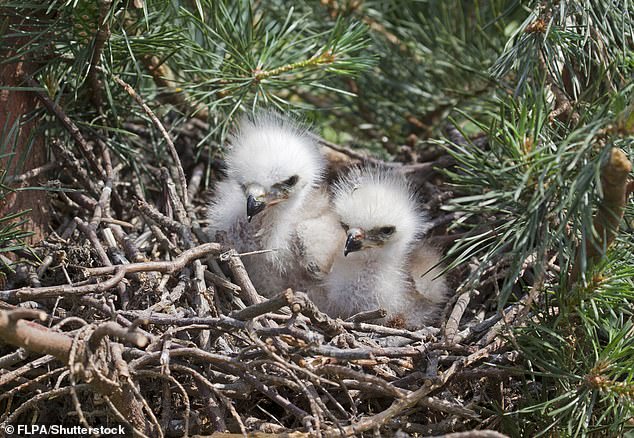 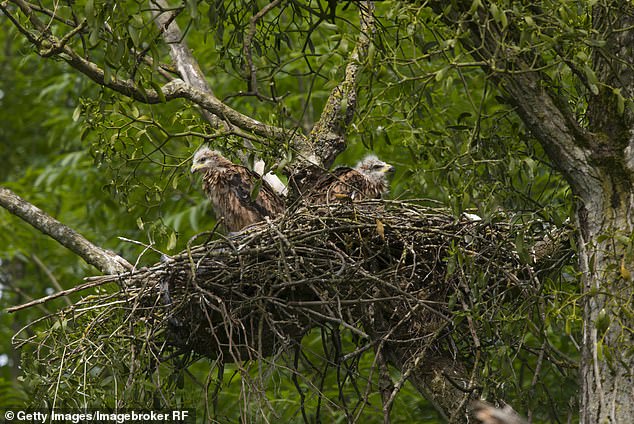 It is hoped the results of the UK’s reintroduction scheme, which is said to be the country’s most successful bird conservation project to date, will be replicated in Spain 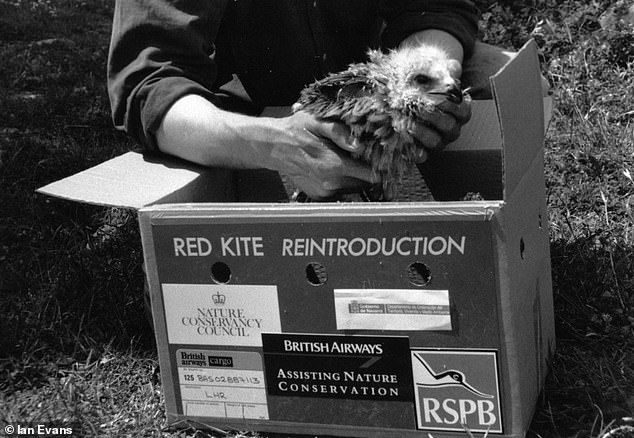 A red kite chick from the original reintroduction project. Between 1989 and 1994, kites from Spain were imported and released in England by the RSPB and English Nature

The RSPB’s Duncan Orr-Ewing, who organised the first red kite reintroduction programme in Scotland and is now advising the latest project, said: ‘The red kite population is confined to Europe.

‘Compared to most of our other native birds of prey it has a relatively small global population.

‘Following concerted conservation action in the UK in recent decades, this species’ population has greatly recovered.

‘It is amazing that we are now able to support conservation action for red kites in Spain and to reciprocate their previous generosity in supplying donor stock for our original reintroduction project in England.’

Red kites, or Milvus milvus, are large birds of prey that can have a wingspan of 5ft, but typically weigh between 0.9 and 1.3kg.

They largely feed on carrion and worms, and cut a distinctive silhouette in the sky with splayed wing tips and a distinctive forked tail.

They were common city scavengers in medieval London, and were mentioned in Shakespeare’s ‘Coriolanus’ when he described the capital as ‘city of kites and crows’.

The birds also had a reputation for stealing laundry hung out to dry for their nests, which gets mentioned in ‘The Winter’s Tale’.

However, persecution over a 200-year period from shootings, poisonings and egg collectors saw numbers fall.

By the 20th century the birds were extinct in England and Scotland, and while there were few breeding pairs in central Wales there were not enough to recolonise the rest of Britain.

The red kite was one of only three globally threatened species in the UK in the 1980s. 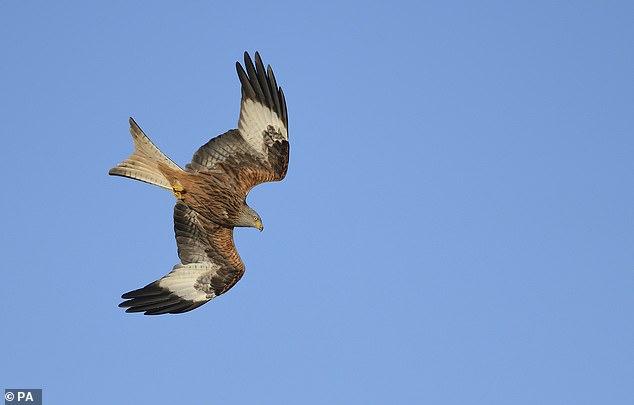 Red kites, or Milvus milvus , are large birds of prey that can have a wingspan of 5ft, but typically weigh between 0.9 and 1.3kg. They largely feed on carrion and worms, and cut a distinctive silhouette in the sky with splayed wing tips and a distinctive forked tail 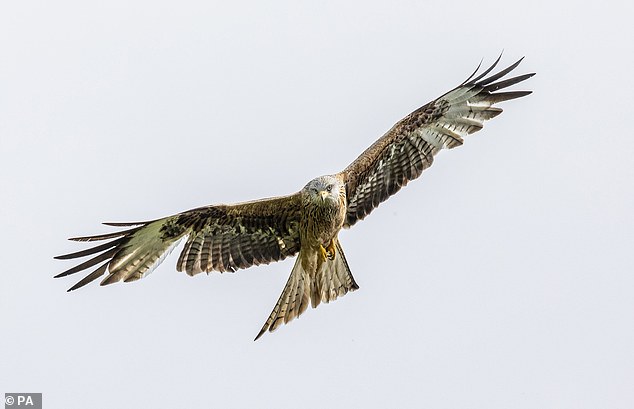 1903 – A Kite Committee was formed individuals appalled at the continuing destruction of kites, who initiated the first nest protection schemes.

1989 – Reintroduction scheme began with six Swedish birds released in north Scotland and four Swedish and one Welsh bird in Buckinghamshire.

1994 – Last few birds were released in England as the initial reintroduction scheme ended.

2022 – UK to begin donating red kites back to Spain to assist conservation efforts. 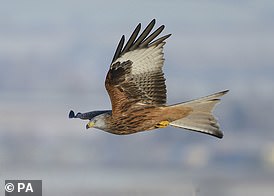 This sparked a trial reintroduction project involving bringing kites from Spain, as the kites were doing well there in comparison to the UK.

Between 1989 and 1994, kites from Spain were imported and released in England by the RSPB and English Nature, now Natural England.

Birds were also brought from Sweden for the Scottish releases, leading to the species incredible recovery across Britain.

By 1996, at least 37 pairs had bred in southern England, and the population in Britain is now at an estimated at 6,000 breeding pairs.

Conservationists say the project has been so successful that red kite chicks can now be donated back to Spain, where populations have been decreasing.

The decline is mainly due to the illegal poisoning of birds of prey and vultures, and lack of food.

Spanish authorities have taken major steps to address in recent years, wildlife experts said, and many of the other bird species have recovered.

However, the red kite population has remained at low levels, prompting the  collaboration between Spanish and British conservation organisations.

The RSPB and Accion por el Mundo Salvaje are set to supply 30 wild red kite chicks a year for three years from the large healthy population in the East Midlands.

The project will involve some of the people from the original England and Scotland red kite reintroduction projects.

This year, all the chicks going to Spain have been collected by Forestry England from nests in the public forests it cares for, as well as from the Boughton Estate in Northamptonshire.

Juvenile birds are set to be flown to Extremadura and Andalusia, and will be acclimatised in aviaries before being released.

Natural England chairman Tony Juniper said: ‘The reintroduction of red kites to England is the most successful raptor conservation story in Europe.

‘It’s a clear blueprint for the future of species reintroductions, particularly for some of our most endangered birds.

‘I’m hopeful the red kite chicks bound for Spain will flourish in the same way the chicks that arrived to this country a generation ago did, as we support those helping to rebuild the population and the prospects of this magnificent bird in southern Europe.’

Turtle doves are on the brink of extinction over lack of seeds they eat from crops in warmer months, experts say

The turtle dove is the fastest declining bird species in the UK and on the brink of extinction.

There are now only 2,100 breeding pairs in the UK, the first national survey of the endangered birds has found.

Huge numbers are shot by hunters in Europe on their annual migration flight of more than 3,000 miles to spend the winter in Sub-Saharan Africa.

They are thought to be in decline due to a lack of seeds they eat from crops in the spring and summer.

The research shows a 98 per cent reduction in turtle dove numbers in the last half-century. 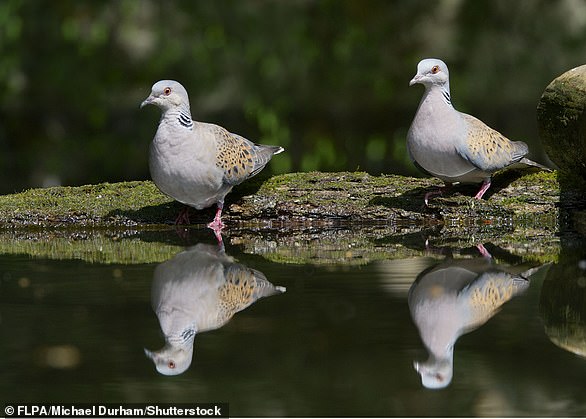 There are now only 2,100 breeding pairs of turtle doves in the UK as huge numbers are shot by hunters in Europe on their annual migration flight. Research shows a 98% reduction in the species in the last half-century