A crescent moon will join a ‘planet parade’ of five worlds appearing in order of their distance from the sun as they light up the sky tonight.

Stargazers in the northern hemisphere have been enjoying the opportunity to gaze at Mercury, Venus, Mars, Jupiter and Saturn all at once since the beginning of June.

Last night Mercury climbed higher and appeared brighter than it has previously, and gave early risers the best chance of seeing the full planet parade.

All the planets have now been joined by a half-moon as part of a line-up that has not been seen for 18 years.

It is not uncommon to see two or three planets close together, but this is the first time five of them can be viewed from Britain in order of their distance from the sun since December 2004.

The conjunction was brightest on Friday morning but will remain visible until Monday from most parts of the world. 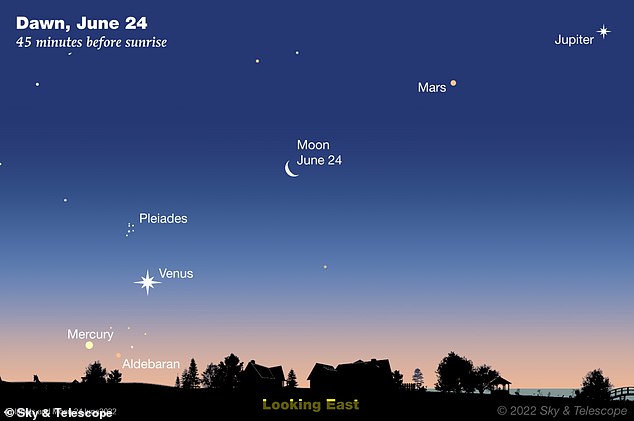 Putting on a show: Early risers are in for a rare treat on Saturday morning when they get their best chance to spot five planets aligning in a special way for the first time in 18 years alongside a crescent moon. Mercury, Venus, Mars, Jupiter and Saturn will line up in order of their distance from the sun (pictured in this graphic)

WHEN DO THE FIVE PLANETS APPEAR ABOVE THE HORIZON?

The planets have been rising above the horizon at the following times:

The five worlds will shine in a row because they all travel on the plane of the solar system, known as the ecliptic.

However, they will not be as close as they appear, because each planet is millions of miles away from the others.

As June has been progressing, Jupiter has separated from Mars and Saturn has been moving even further along the arc.

One of the best days to try and spot the alignment is Saturday (June 25), when a crescent moon will also be visible between Venus and Mars.

It will act as a stand-in for Earth in the display of the first five planets from the sun.

The peak time to see the conjunction is after dawn and it will last about an hour before sunlight washes out the sky.

Professor Beth Biller, personal chair of exoplanet characterisation at Edinburgh University’s institute for astronomy, told MailOnline: ‘This is an exciting opportunity for early risers to see all five naked-eye planets at once — most of the time they are split between the early morning and evening sky.’

Dr Samantha Rolfe, the principal technical officer at the University of Hertfordshire’s observatory, suggested using the app Stellarium to help find Mercury in the dawn sky.

Amateur astronomers do not need to use binoculars or a telescope if they don’t have them, she said, before adding: ‘Check the weather forecast for clear or even partially clear skies, and set an alarm — it will be worth getting up for.

‘Planetary conjunctions traditionally have been more the stuff of astrology than serious astronomy,’ said Mitzi Adams, a NASA astronomer and researcher in a blog last month, ‘but they never fail to impress during observations, particularly when the gas giants are involved.’

Throughout June, Mercury has been the faintest of the five planets and quite close to the horizon, before vanishing in the glare of sunrise.

But it has been easier to spot as the month has gone on.

Dr Greg Brown, the public astronomy officer at Royal Museums Greenwich, said of all the planets, it will be easiest to see Venus and Jupiter.

Venus has been emerging above the horizon from around 04:00 BST and Mars and Jupiter at about 02:45 BST.

Saturn, which rises above the horizon from about 01:30 BST, has been difficult to see at twilight, along with Mars, while Mercury has been appearing at around 04:30 BST and remaining close to the horizon.

Over the next few months the planets will appear to spread out farther each morning before Venus and Saturn exit the stage by September.

DOES PLANETARY ALIGNMENT HAVE AN EFFECT ON EARTH?

The planets in our solar system never line up in one perfectly straight line like they show in the movies.

If you look at a two-dimensional plot of the planets and their orbits on a piece of paper you may be lead to believe that all the planets will circle around to the same line eventually.

In reality, the planets do not all orbit perfectly in the same plane. Instead, they swing about on different orbits in three dimensional space. For this reason, they will never be perfectly aligned.

Alignment is therefore an artifact of a viewpoint and not something fundamental about the planets themselves.

Even if the planets did all align in a perfectly straight line, it would have negligible effects on Earth.

Fictional and pseudo-science authors like to claim that a planetary alignment would mean that all of the gravitational fields of the planets add together to make something massive that interferes with life on Earth.

In truth, the gravitational pulls of the planets on the Earthare so weak that they have no significant effect on Earth life.

There are only two solar system objects with enough gravity to significantly affect Earth: the moon and the sun.

The moon’s gravity is primarily responsible for the daily ocean tides. The near alignment of the sun and the moon does have an effect on the Earth, because their gravitational fields are so strong.

This partial alignment occurs every full moon and new moon, and it leads to extra strong tides called ‘spring tides’.

The word ‘spring’ here refers to the fact that the water seems to leap up the shore with the extra strong tides every two weeks – not that they occur only in the spring season.