Amazon’s Alexa can already whisper, put on an accent and speak in the voice of Samuel L. Jackson – and soon it could even impersonate your dead grandmother.

The tech giant has revealed it is developing a system to let Alexa mimic any voice after hearing less than a minute of audio.

It could allow users of Amazon’s voice assistant to have stories read to them in the voice of a loved one – including a deceased friend or relative.

Speaking at Amazon’s Re:Mars conference in Las Vegas on Wednesday, Alexa’s senior vice-president Rohit Prasad said the goal was to ‘make the memories last’ after ‘so many of us have lost someone we love’ during the pandemic.

‘We are unquestionably living in the golden era of AI, where our dreams and science fictions are becoming a reality,’ he said. 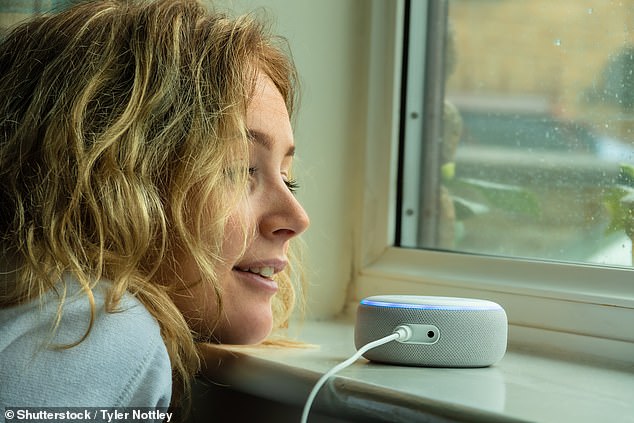 A software engineer at Google who signed up to test Google’s AI tool LaMDA has been put on leave after claiming that the chatbot was sentient.

During a series of conversations with LaMDA, 41-year-old Blake Lemoine presented the computer with various scenarios through which analyses could be made.

They included religious themes and whether the artificial intelligence could be goaded into using discriminatory or hateful speech.

Lemoine came away with the perception that LaMDA was indeed sentient and was endowed with sensations and thoughts all of its own.

During the conference, a video segment portrayed a child who asked, ‘Alexa, can grandma finish reading me the Wizard of Oz?’

A moment later, Alexa affirmed the command and changed her voice.

Prasad noted that, using the new technology, the company had been able to produce high-quality audio using just one minute of speech.

‘The way we made it happen is by framing the problem as a voice conversion task and not a speech generation path,’ he said.

Amazon did not give any indication of when the voice-mimicking feature would be rolled out to the public.

The work wades into an area of technology that has garnered close scrutiny for potential benefits and abuses.

The goal is to help people with speech impairments or other problems but some worry it could also be used to propagate political deepfakes.

For instance, Microsoft recently restricted which businesses could use its software to parrot voices.

Meanwhile, a Google engineer was put on paid leave earlier this month after claiming that a company chatbot had advanced to sentience and could express thoughts and feelings.

Prasad said Amazon’s aim for Alexa is ‘generalisable intelligence’, or the ability to adapt to user environments and learn new concepts with little external input.

He said that goal is ‘not to be confused with the all-knowing, all-capable, uber artificial general intelligence’, or AGI, which Alphabet’s DeepMind unit and Elon Musk-co-founded OpenAI are seeking.

Another Amazon executive said Tuesday that Alexa had 100 million customers globally, in line with figures the company has provided for device sales since January 2019.

Is Alexa turning into HAL? Amazon says its virtual assistant will soon take actions before it is even asked

Amazon is working to improve the sophistication of its Alexa virtual assistant so that it can make decisions for itself, the company has revealed.

The US tech giant claims the technology will learn about its owner’s habits and perform tasks – such as switching off lights or turning on the TV – without even being asked.

Some of the company’s new model Echo speaker devices, which have Alexa built into them, include an ultrasound motion detection function to automatically sense when a person enters the room.

The company also recently unveiled an Alexa-powered home robot called Astro, which has been designed to be a security device as well as help with caregiving.

The proposals evoke echoes of HAL 9000, the sentient artificial intelligence which featured in the sci-fi novel and film 2001: A Space Odyssey.

HAL was initially a benign source of information and a caretaker for the systems on the Discovery One spacecraft, but it eventually became autonomous, refusing commands and threatening the crew.