Gone fishing… for plastic! Tiny fish-shaped robot that ‘swims’ around picking up microplastics and can squeeze into cracks and crevices could help clean up the oceans

A fish-shaped robot that ‘swims’ around quickly picking up microplastics has been created by scientists.

The tiny machine ‘wiggles’ its body and ‘flaps’ its tail fins to move through water, and could be used to help clear the oceans of plastic pollution.

It measures just half-an-inch in length, meaning it can reach into tiny cracks and crevices to collect plastic pieces that would otherwise be inaccessible.

Developed by a team at the Sichuan University in China, the robot has no power source, but moves thanks to flashes of near-infrared light.

It can move at nearly three body lengths per second – a record for soft marine robots, according to the researchers.

While it swims, the self-propelling device is able to pick up nearby polystyrene microplastics, which stick to its surface through chemical bonds, and transport them elsewhere.

This could be used in future to help remove the estimated twenty-four trillion pieces of microplastics currently in global oceans. 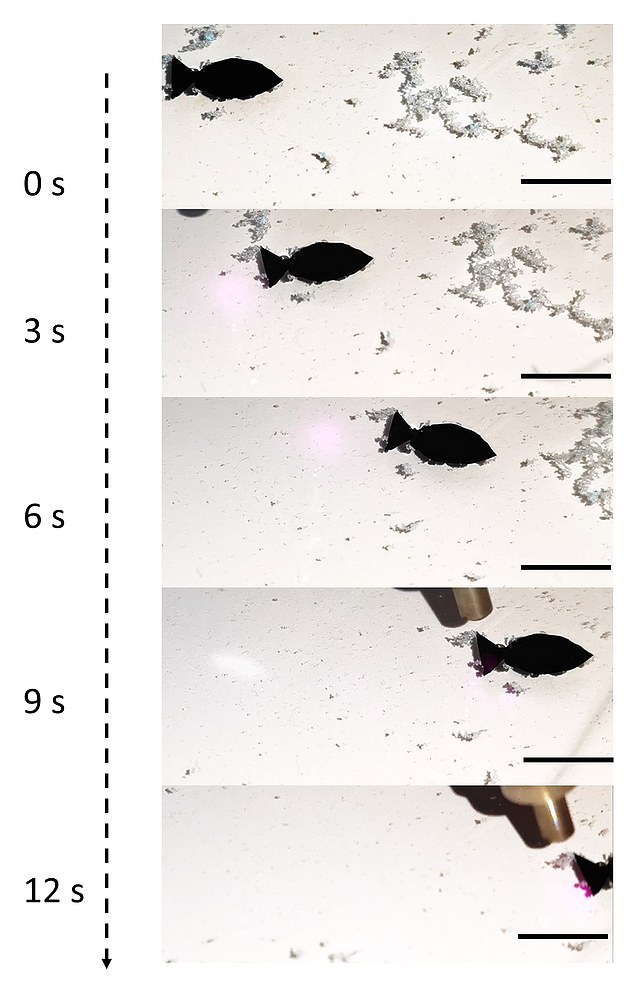 The fish-shaped robot is propelled through water by flashing a near-infrared light onto its tail and causing it to flap from side to side and absorb microplastics. Scale bar: 10 mm

The tiny machine ‘wiggles’ its body and ‘flaps’ its tail fins to quickly move through water, and could be used to help clear up the oceans of plastic pollution in future

HOW WAS THE ROBOT FISH MADE?

The researchers first made nanosheets from cyclic sugar molecules bonded to graphene – the latter known to be the toughest material on Earth.

Solutions of the nanosheets were then incorporated with different concentrations of polyurethane latex.

Finally, the sheets were assembled together layer-by-layer, gradually increasing the concentration of latex from one side of the sheet to the other as seen in the mother-of-pearl sheets.

This material was then used to create the durable, self-healing robot fish.

‘Its speed is comparable to that of plankton – representing the outperformance of most artificial soft robots.

‘Furthermore, the robot can stably absorb pollutants and recover its robustness and functionality even when damaged.’

It is estimated that between 5 and 13 million metric tons of plastic pollution enter the oceans each year.

This ranges from large floating debris to microplastics as a result of the waste breaking down.

According to a study by Kyushu University scientists, there are an estimated twenty-four trillion pieces of microplastics in the ocean as of October 2021.

They can be harmful to animals if ingested, and are notoriously difficult to to remove from the environment – especially once settled into nooks and crannies at the bottom of rivers, streams, lakes or oceans.

The materials used to create the robot are inspired by mother-of-pearl, the strong and flexible material found on the inside of clam shells.

Mother-of-pearl is made up of layers of materials that differ in composition on a gradient.

On one side they are made of a calcium carbonate composite, and then the layers change gradually to become mostly made of a silk protein filler on the other side.

Professor Zhang and his team wanted to use this kind of structure in the materials used to build their robot, to emulate its durability.

Traditional materials used for soft robots are hydrogels and elastomers, which are easily damaged in water.

The researchers first made nanosheets from cyclic sugar molecules bonded to graphene – the latter known to be the toughest material on Earth.

Solutions of the nanosheets were then incorporated with different concentrations of polyurethane latex.

Finally, the sheets were then assembled together layer-by-layer, gradually increasing the concentration of latex from one side of the sheet to the other as seen in the mother-of-pearl sheets.

This material was then used to create the robot. 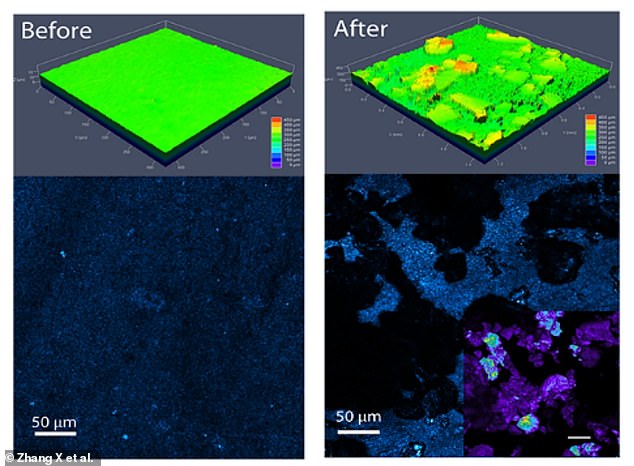 Microscopic images of the robot before and after adsorbing microplastic particles

The robot’s durability and speed make it ideal for monitoring microplastics and other pollutants in harsh aquatic environments.

It can heal itself after being cut – as the layered structure of the nanosheets means means they can bind back together after being broken apart – maintaining the robot’s ability to pick up debris.

‘We anticipate our nanostructural design will offer an effective extended path to other integrated robots that required multifunction integration.’

In a paper published today in Nano Letters, a design for a new plastic-hunting robot has been revealed.

WHAT ARE MICROPLASTICS AND HOW DO THEY GET INTO OUR WATERWAYS?

They have hit the headlines over recent years, as improper disposal has resulted in tonnes of waste making its way into the ocean.

Each year, tonnes of plastic waste fails to get recycled and dealt with correctly, which can mean they end up in marine ecosystems.

Although it’s unclear exactly how they end up in the water, microplastics may enter through simple everyday wear and tear of clothing and carpets.

Tumble dryers may also be a source, particularly if they have a vent to the open air.

Plastics don’t break down for thousands of years and it is estimated that there are already millions of items of plastic waste in the oceans. This number is expected to rise.

Studies have also revealed 700,000 plastic fibres could be released into the atmosphere with every washing machine cycle.

Current water systems are unable to effectively filter out all microplastic contamination, due to the varying size of particles.

More than 80 per cent of the world’s tap water is contaminated with plastic, research published in September 2017 revealed.

The US has the highest contamination rate at 93 per cent, followed by Lebanon and India, experts from the University of Minnesota found.

France, Germany and the UK have the lowest levels, however, they still come in at 72 per cent.

Overall, 83 per cent of water samples from dozens of nations around the world contain microplastics.

Scientists warn microplastics are so small they could penetrate organs.

Bottled water may not be a safer alternative, as scientists have found contaminated samples.

Creatures of all shapes and sizes have been found to have consumed the plastics, whether directly or indirectly.

Previous research has also revealed microplastics absorb toxic chemicals, which are then released in the gut of animals.