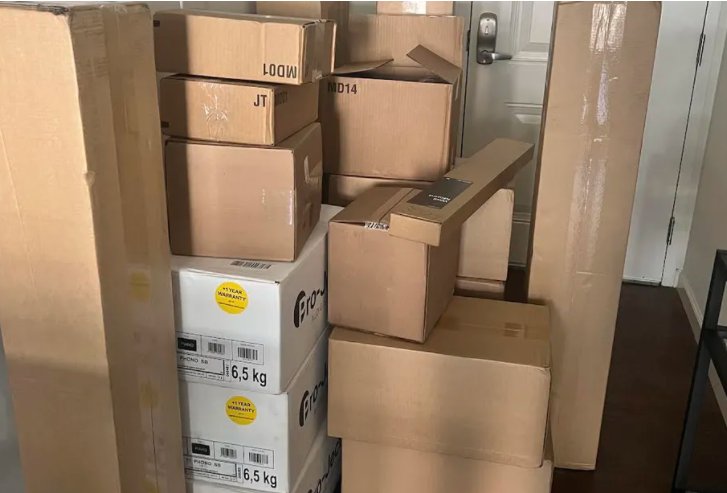 Some customers who recently ordered speakers from the audio company, Sonos, received more than what they asked for and even got charged for it.

Now, Sonos wants them back, promising a refund for the additional charges but customers feel they should be compensated for the logistical nightmare.

One US customer who bought five Sonos products had nearly 30 different shipments showing up at his doorstep with about $15,000 worth of products, as reported by The Verge.

His order for a Sonos Turntable Set, Arc soundbar, Arc wall mount, One speaker, and Roam speaker resulted in so many boxes that he could no longer fit them into his flat.

He’s also being charged over $6,000 in extra fees for the products he didn’t order.

The issue seems to have affected several US customers this week, who took to a Reddit thread to complain and found they weren’t alone. Some say they received and were charged for two to five extra speakers.

‘Got 3 Subs and 3 Arcs. Ordered only one of each. Major hassle. And they charged my visa 3x. So now Sonos is using up a nice portion of my available credit. Plus they want the customer to take the extra stuff to the UPS store themselves,’ wrote one user.

Other users said they had received up to seven speakers after ordering just one and got charged over $2,000 for it.

The company emailed affected customers who had been overcharged and received multiple shipments that it was a system update that resulted in ‘some orders being processed multiple times’.

‘I want to personally apologize for the inconvenience this has caused. You will receive a full refund for any excess orders and should see the credit issued to your account within 10 business days,’ Ruth Sleeter, Sonos’ chief information officer said in the email.

Affected customers have been asked to ship the extra speakers back with a provided prepaid label, saying they could use Sonos’ carrier for pickup.

Sonos promised affected customers a refund for the extra charges in up to 10 business days but no additional compensation for the inconvenience.

The company also said that customers will only be refunded if they returned the extra products but that might not be legally right. The US Federal Trade Commission’s (FTC) website advises that ‘you never have to pay for things you get but didn’t order’ and that ‘you also don’t have to return unordered merchandise’.

While the deliveries seem to have stopped people are still stuck with the mountain of products they didn’t order with the additional hassle of having to return them to get a refund.

Some customers have complained that Sonos initially wanted them to print out the prepaid labels and lug the items to a local delivery centre. Later, Sonos sent a delivery worker who didn’t realise he was supposed to pick up 30 packages and took just one instead.