Fastest NOVA ever recorded: Massive star explosion so bright it was visible from Earth with binoculars burns out in just one day

The fastest nova star explosion ever seen has been recorded by astronomers.

They watched as a white dwarf star ‘stole’ gas from a nearby red giant and triggered a blast bright enough to be witnessed from Earth with binoculars.

Named V1674 Hercules, the nova explosion occurred 100 light-years away on June 12 last year but lasted for just a day — up to three times quicker than any previously observed.

A nova is a sudden explosion of bright light from a two-star system. Every nova is created by a white dwarf – the very dense leftover core of a star – and a nearby companion star.

Experts from Arizona State University hope their observation will help answer larger questions about the chemistry of our solar system, the death of stars and the evolution of the universe. 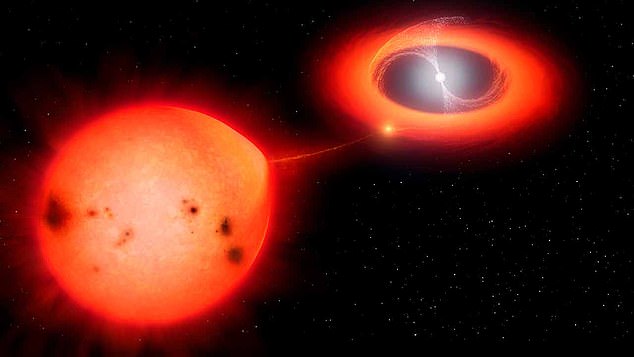 The fastest nova star explosion ever seen has been recorded by astronomers. This illustration shows the type of two-star system that the research team thinks V1674 Hercules belongs to

WHAT IS A WHITE DWARF?

A white dwarf is the remains of a smaller star that has run out of nuclear fuel.

While large stars – those exceeding ten times the mass of our sun – suffer a spectacularly violent climax as a supernova explosion at the ends of their lives, smaller stars are spared such dramatic fates.

When stars like the sun come to the ends of their lives they exhaust their fuel, expand as red giants and later expel their outer layers into space.

The hot and very dense core of the former star – a white dwarf – is all that remains.

White dwarfs contain approximately the mass of the sun but have roughly the radius of Earth, meaning they are incredibly dense.

The gravity on the surface of a white dwarf is 350,000 times that of gravity on Earth.

They become so dense because their electrons are smashed together, creating what’s caused ‘degenerative matter’.

This means that a more massive white dwarf has a smaller radius than its less massive counterpart.

Material shot into space at speeds of millions of miles an hour — which was visible from Earth for just over 24 hours before fizzling out.

Lead author Professor Sumner Starrfield, of Arizona State University, said: ‘It was like someone flicked a flashlight on and off.’

Novas differ from supernovas. They occur in binary systems where there is a small, incredibly dense star and a much bigger sun-like companion.

Over time, the former draws matter from the latter, which falls onto the white dwarf.

The white dwarf then heats this material, causing an uncontrolled reaction that releases a burst of energy and shoots the matter away at high speeds, which we observe as visible light.

The bright nova usually fades over a couple of weeks or longer but V1674 Hercules was over in a day.

Professor Starrfield said: ‘It was only about one day, and the previous fastest nova was one we studied back in 1991, V838 Herculis, which declined in about two or three days.’

Nova events at this level of speed are rare, making this nova a precious study subject.

Its speed wasn’t its only unusual trait — the light and energy sent out also pulses like the sound of a reverberating bell.

Every 501 seconds, there is a wobble detectable in visible light waves and X-rays. It is still there a year on — and is set to continue for even longer.

Mark Wagner, head of science at the Large Binocular Telescope Observatory on Mount Graham, southern Arizona, said: ‘The most unusual thing is this oscillation was seen before the outburst.

‘But it was also evident when the nova was some 10 magnitudes brighter. A mystery that people are trying to wrestle with is what’s driving this periodicity that you would see it over that range of brightness in the system.’

The US team also noticed a strange wind as they monitored the matter ejected by the nova, which they think may be dependent on the positions of the white dwarf and its companion star.

They appear to be shaping the flow of material into space surrounding the system which lay in the constellation of Hercules.

It is very conveniently placed, being in a dark sky in the east as twilight fades after sunset.

As this places it less than 17° north of the celestial equator, it could be seen from all over the world — and be photographed with an exposure of just a few seconds.

Novae can tell us important information about our solar system and even the universe as a whole.

About 30 to 60 are thought to occur each year in the Milky Way, although only about 10 are discovered during that time. Most are obscured by interstellar dust.

A white dwarf collects and alters matter, then seasons the surrounding space with new material when it goes nova.

It is an important part of the cycle of matter in space as the materials ejected by novae will eventually form new stellar systems.

Such events helped form our solar system as well, ensuring that Earth is more than a lump of carbon. 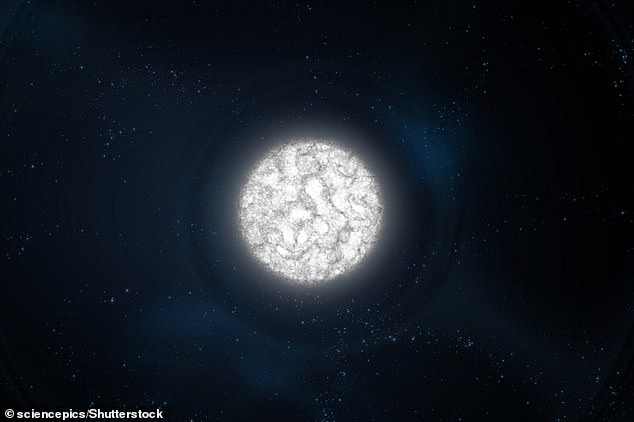 White dwarfs are the incredibly dense remains of sun-sized stars after they exhaust their nuclear fuel, shrunk down to roughly the size of Earth (artist’s impression)

‘One of the things we are going to learn from this nova is, for example, how much lithium was produced by this explosion.

‘We are fairly sure now that a significant fraction of the lithium that we have on the Earth was produced by these kinds of explosions.’

Sometimes a white dwarf star doesn’t lose all of its collected matter during a nova explosion, so with each cycle, it gains mass.

This would eventually make it unstable, and the white dwarf could generate a type 1a supernova, which is one of the brightest events in the universe.

Each type 1a supernova reaches the same level of brightness, so they are known as standard candles.

Co-author Professor Charles Woodward, of the University of Minnesota, said: ‘Standard candles are so bright we can see them at great distances across the universe.

‘By looking at how the brightness of light changes, we can ask questions about how the universe is accelerating or about the overall three-dimensional structure of the universe. This is one of the interesting reasons that we study some of these systems.’

Additionally, novae can tell us more about how stars in binary systems evolve to their death, a process that is not well understood.

They also act as living laboratories where scientists can see nuclear physics in action and test theoretical concepts.

The observed nova is now too faint for other types of telescopes to see, but it can still be monitored by the Large Binocular Telescope thanks to its wide aperture and state of the art scanners.

Professor Starrfield and colleagues now plan to investigate the cause, the processes that led to it, the reason for its record-breaking decline, the forces behind the observed wind, and the pulsing brightness.

The observation was published in the Research Notes of the American Astronomical Society.

HOW DO STARS FORM?

Stars form from dense molecular clouds – of dust and gas – in regions of interstellar space known as stellar nurseries.

A single molecular cloud, which primarily contains hydrogen atoms, can be thousands of times the mass of the sun.

They undergo turbulent motion with the gas and dust moving over time, disturbing the atoms and molecules causing some regions to have more matter than other parts.

If enough gas and dust come together in one area then it begins to collapse under the weight of its own gravity.

As it begins to collapse it slowly gets hotter and expands outwards, taking in more of the surrounding gas and dust.

At this point, when the region is about 900 billion miles across, it becomes a pre-stellar core and the starting process of becoming a star.

Then, over the next 50,000 years this will contract 92 billion miles across to become the inner core of a star.

The excess material is ejected out towards the poles of the star and a disc of gas and dust is formed around the star, forming a proto-star.

This matter is then either incorporated into the star or expelled out into a wider disc that will lead to the formation of planets, moons, comets and asteroids.