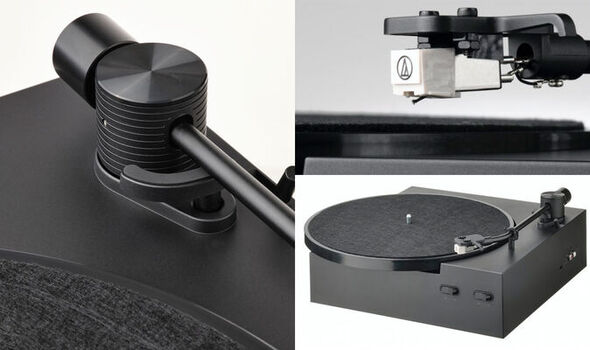 Ikea has unveiled its first ever record player, which is part of a new range of furniture designed for music lovers. The OBEGRÄNSAD vinyl player was crafted by the budget homeware specialists along with house music supergroup Swedish House Mafia. The record player has a minimalistic, chunky design and is part of a new collection which is meant to help with music production at home.

This collection has been dubbed OBEGRÄNSAD and will include more than 20 items designed to make people’s homes more suited to music creation.

So far three items have been revealed from this collection – the OBEGRÄNSAD record player as well as an arm chair and a desk with two speaker stands.

The products were announced at the Ikea Festival at the 2022 Milan Design Week and will be available in stores this autumn.

A price hasn’t been announced for the Ikea record player, but the retailer said it would be a “quality” product that is also “affordable” and “easy to use”.

In terms of specs, the vinyl player will be powered over USB and will feature a replaceable cartridge and needle.

It will also boast a built-in pre-amp.

Ikea said the upcoming vinyl player will also work with its ENEBY speaker if you’re looking for something to pair it with.

The ENEBY speaker is a Bluetooth speaker that costs £50. However, you will have to hook this up to the new Ikea vinyl player with wires as it doesn’t support Bluetooth.

While Ikea didn’t confirm it in its announcement, pictures show that the upcoming vinyl player will come with an Audio Technica needle.

And that’s great news as the Japanese company is well known for the quality of its audio equipment.

IKEA sells 'one billion' meatballs each year according to expert

Speaking about the new record player, Ikea designer Friso Wiersma said: “The solid, chunky design gives the player a presence in the room. It transmits the physicality of music in the collection, making it really claim space with the attitude of music woven into it – rather than making it blend.”

While this week’s announcement will surely catch the attention of vinyl lovers, it isn’t the first time Ikea has announced a record player.

The Swedish furniture maker previously announced a record player back in 2018 that was going to be made in collaboration with Teenage Engineering.

However, this product never ended up making it to market.