How does YOUR area stack up? Interactive maps reveal the worst zones for noise pollution in London, New York, and Paris – as studies warn loud traffic can impair communication, memory, and mental health

As three of the busiest modern cities around the world, it should come as no surprise that London, New York, and Paris are buzzing with traffic noise.

Now, interactive maps have been developed by climate charity Possible as part of its Car Free Cities campaign, revealing just how intense this noise can be in parts of the three cities.

‘But the damage London’s traffic noise is having on the health of its residents has been overlooked for too long – with the last noise pollution strategy in London being 2004!

‘Megacities like Paris are showing us up – addressing the issue seriously through proper monitoring and the use of innovative solutions like sound sensors, while taking big strides to reduce car dominance more widely.

‘London urgently needs to take a leaf out of their book, reducing traffic and revamping our soundscape.’

Aside from being irritating, studies have shown that noise pollution can have serious impacts on our health, with the World Health Organisation (WHO) now listing noise pollution as one of the biggest threats to environmental health in Europe.

‘Excessive noise seriously harms human health and interferes with people’s daily activities at school, at work, at home and during leisure time,’ WHO explains.

‘It can disturb sleep, cause cardiovascular and psychophysiological effects, reduce performance and provoke annoyance responses and changes in social behaviour.’ 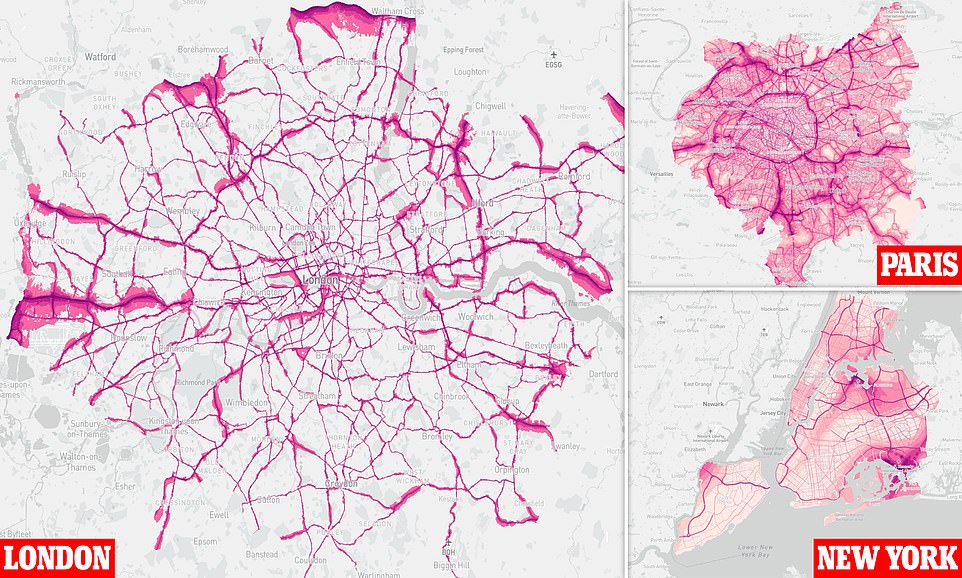 Now, interactive maps have been developed by climate charity Possible as part of its Car Free City campaign, revealing just how intense this noise can be in parts of London, Paris and New York

Decibels: The measurement of noise

The London noise pollution map was created based on data from the environment department (DEFRA).

‘With space for people and nature now at a greater premium in cities, a huge amount of space, estimated at 31.9 km2 in London alone, is taken by cars – that’s the equivalent of over 4000 football pitches,’ explained Andrew Simms, Car Free Megacities Advocacy & Communications Director at the New Weather Institute.

The interactive map reveals how noise pollution levels are highest around many of London’s major roads and airports.

Parts of the M25 appear to be the worst offenders, with sections around Heathrow Airport, Waltham Cross and  Upminster all recording an average noise intensity of 75 decibels – louder than a washing machine or a dishwasher.

In contrast, roads in leafy suburbs have the lowest levels of air pollution in London, with roads in Woolwich, Orpington and Hendon recording an average noise intensity of less than 40 decibels – quieter than a stream.

‘The good news, however, among the little to emerge from the traumatic experience of the Covid-19 pandemic, is that we have seen how quickly a city like London, and several of its boroughs can change,’ Mr Simms said.

‘Innovative measures have shown the way ahead to improve air quality, make streets safer for walking, cycling and for children playing, and to reduce traffic where people live.

‘At the height of the first lockdown, air pollution in some UK cities dropped by as much as 60 per cent.’ 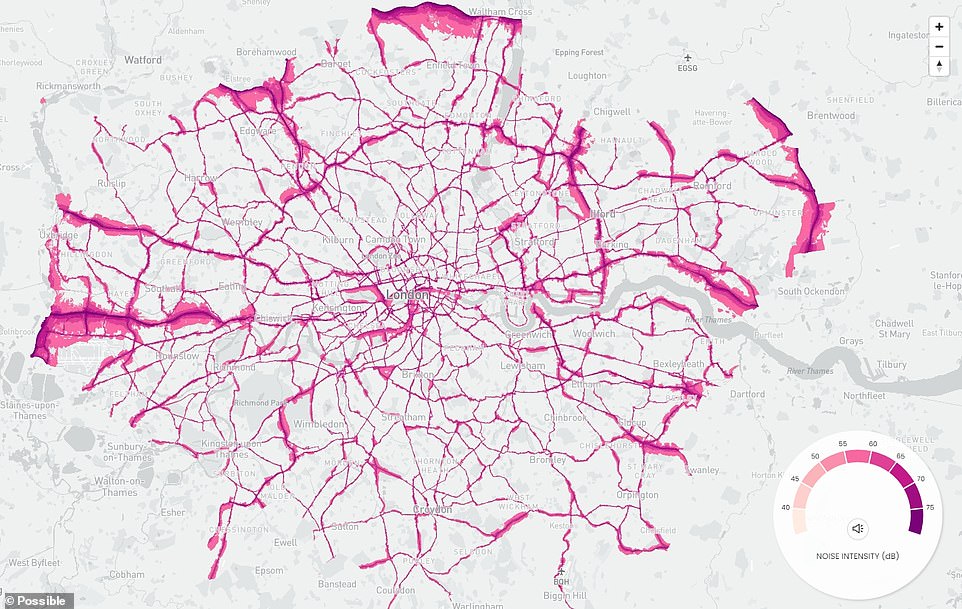 The London noise pollution map was created based on data from the environment department (DEFRA). The interactive map reveals how noise pollution levels are highest around many of London’s major roads and airports 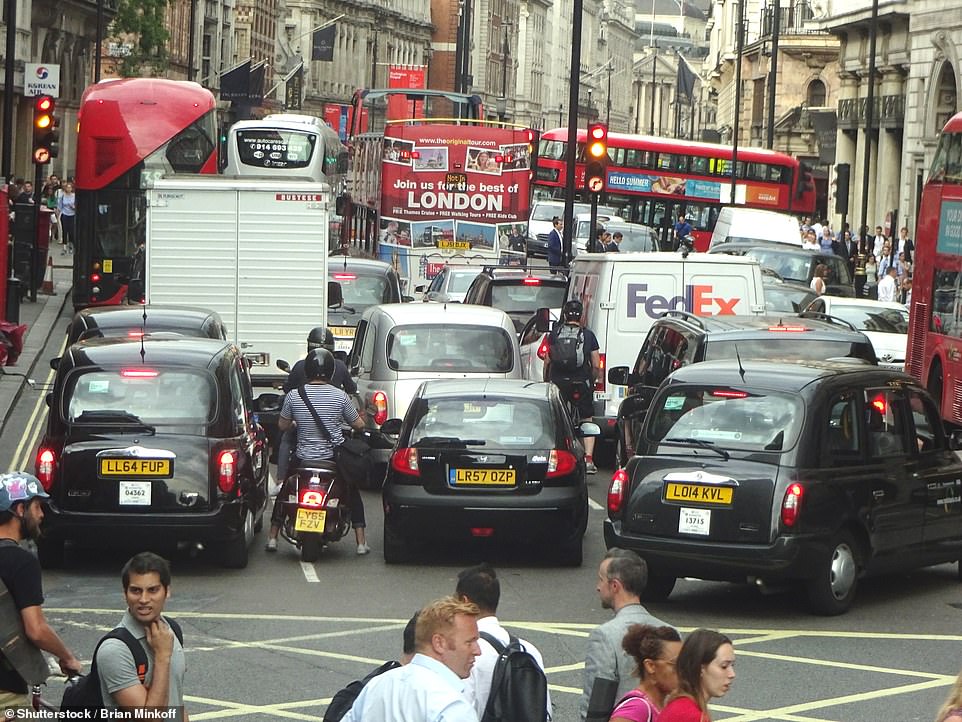 London is one of the busiest modern cities in the world, and was named the seventh worst city for traffic jam in an analysis in 2017

According to the World Health Organisation:

– 20% is exposed to levels exceeding 65 dB during the daytime

The Paris map was developed using data from monitoring stations on the Rumeur network from Bruitparif.

‘Like most major cities in the world, Paris has traditionally favoured travel by car as its preferred means of transportation,’ said Cathy Lamir, Car Free Megacities Paris Lead.

‘Cars still account for 50 per cent of public space, yet only 13 per cent of journeys are actually taken by car.’

The map reveals how, like London, Paris’ main roads are the worst culprits for noise pollution.

The A6B, A15 and A1 all have average noise levels of 75 decibels, shown as dark purple lines on the interactive map.

Meanwhile, Paris’ parks have the lowest levels of noise pollution, with the Bois de Vincennes, Parc de Sceaux and Domaine de Grosbois all clocking levels of less than 40 decibels.

‘Paris is a city of exceptional assets; from its amazing metro system, to its buses, trams, bicycle services, electric scooters and 371 km of cycle lanes and counting, Ms Lamir added.

‘Unlike many other cities, Paris is walkable. This means visitors and residents alike can enjoy its beauty at the same time as reducing air pollution.

‘We need to ensure our strengths are being utilized rather than overlooked in favour of cars.’ 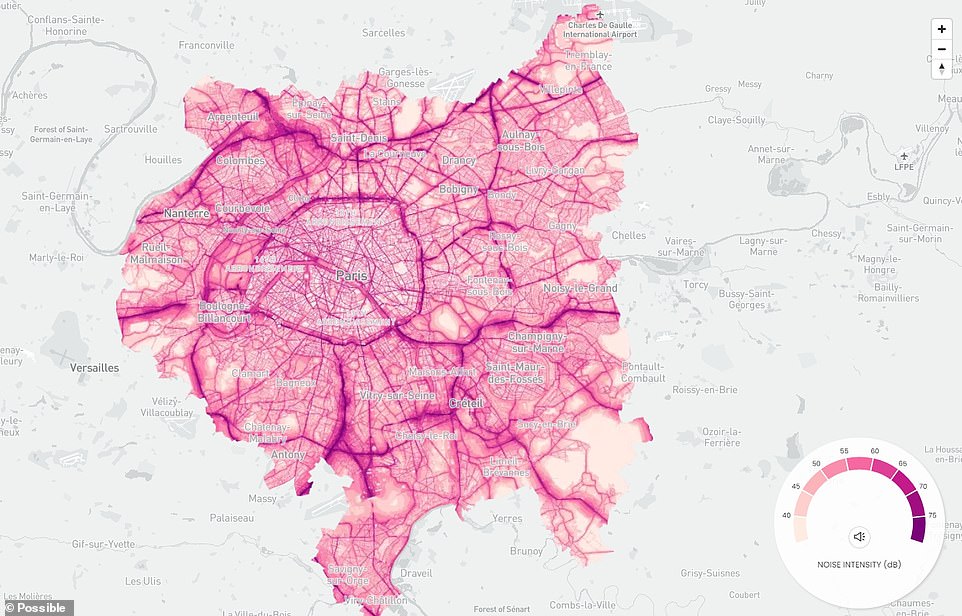 The Paris map was developed using data from monitoring stations on the Rumeur network from Bruitparif. The map reveals how, like London, Paris’ main roads are the worst culprits for noise pollution 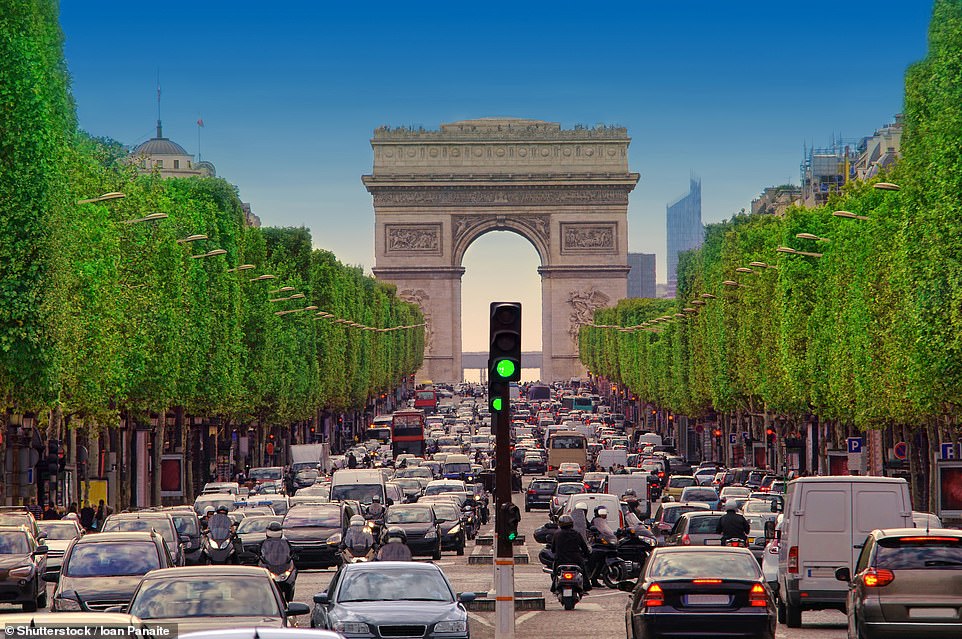 ‘Like most major cities in the world, Paris has traditionally favoured travel by car as its preferred means of transportation,’ said Cathy Lamir, Car Free Megacities Paris Lead

While New York is no doubt a hectic city, it has very low levels of car ownership.

‘Even in boroughs and neighborhoods where car ownership is higher, driving as a primary means of transportation remains quite low; a majority of Queens households own cars, but 52 per cent of workers in the borough still commute via public transit.’ 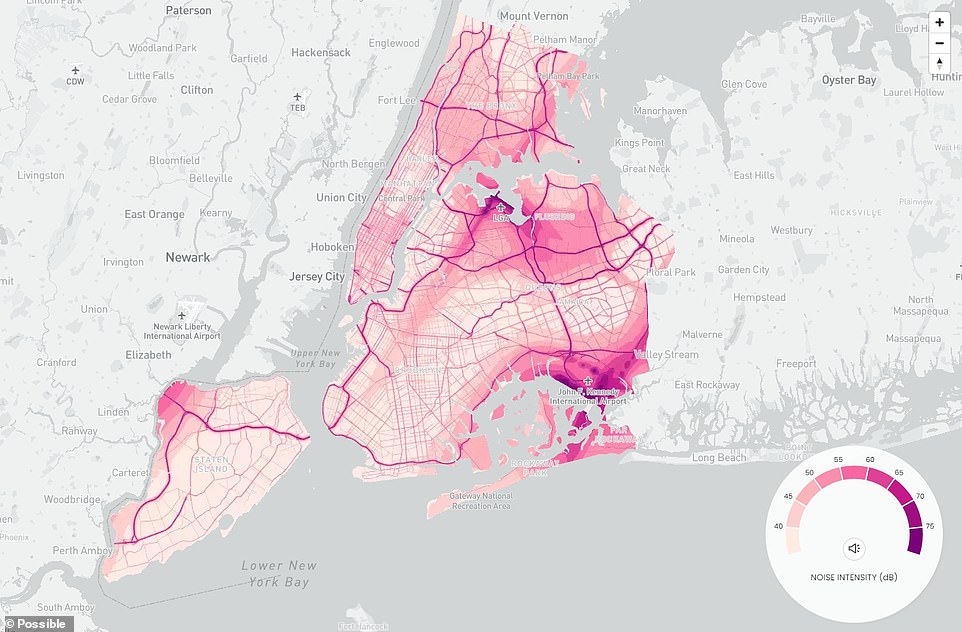 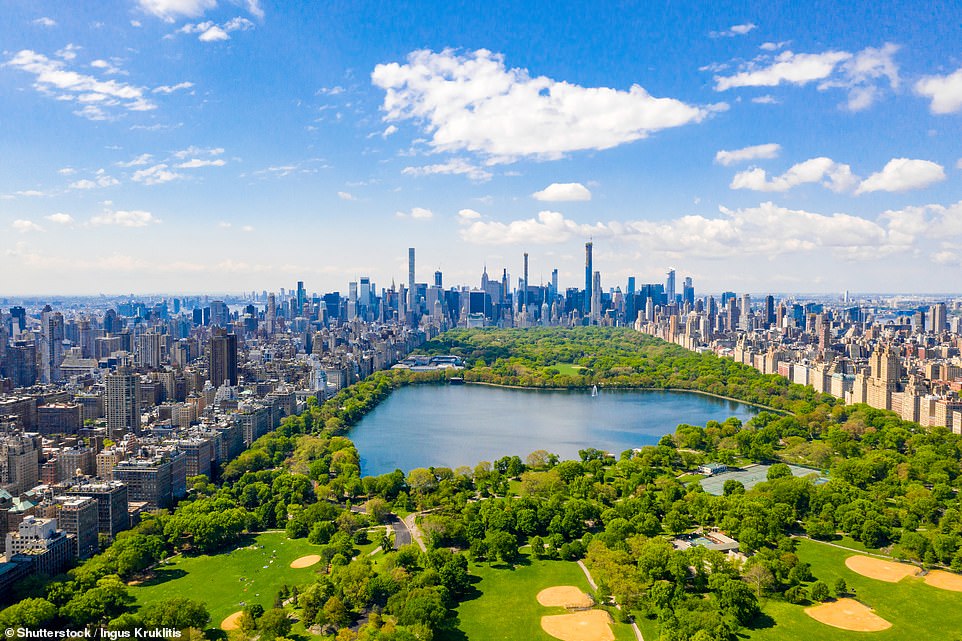 New York’s famous leafy park, Central Park, is one of the quietest areas in the city, with levels of less than 40 decibels on average

Children in areas with high noise pollution, are more likely to be OBESE, study suggests

Children living in areas of the country with higher levels of air pollution, noise and traffic are more likely to be obese, researchers claim.

A study of more than 2,000 children in Sabadell, Spain explored these key environmental factors and their impact on children’s weight.

Forty percent of the children living in the city were overweight or obese at the time of the study, with urban factors including pollution, noise and traffic to blame.

The authors say that by understanding the mechanism of the relationship between an urban environment and childhood obesity can lead to the development of community-led health provisions to promote healthier behaviours in a city.

For this reason, noise pollution is very much centred around New York’s two main airports – JFK and LaGuardia – as well as the roads that serve them.

Meanwhile, New York’s famous leafy park, Central Park, is one of the quietest areas in the city, with levels of less than 40 decibels on average.

‘When there are better options – whether it’s the subway, buses or one’s personal bicycle – people will choose them,’ Mr Green added.

‘The challenge, of course, is that not all neighbourhoods are served equally by such options, and in a city as big as New York it doesn’t take large percentages of people choosing to get around by car to make life unpleasant for everyone else.’

Why is noise pollution such an issue?

Aside from being irritating, studies have shown that noise pollution can have serious impacts on our health, with the World Health Organisation (WHO) now listing noise pollution as one of the biggest threats to environmental health in Europe.

‘Noise pollution is not only an environmental nuisance but also a threat to public health,’ said Zsuzsanna Jakab, WHO Regional Director for Europe.

In 2011, the WHO revealed new evidence on the health effects of traffic-related noise in Europe.

It warned that environmental noise leads to disease burden that is second only to air pollution.

‘One in three people experiences annoyance during the daytime and one in five has disturbed sleep at night because of noise from roads, railways and airports,’ the report said.

‘This increases the risk of cardiovascular diseases and high blood pressure.’

They found that children at schools with higher traffic noise had slower cognitive development.

‘Our study supports the hypothesis that childhood is a vulnerable period during which external stimuli such as noise can affect the rapid process of cognitive development that takes place before adolescence,’ said Jordi Sunyer, an author of the study.

What can we do to protect people from the effects of noise pollution?

According to Emilia Hanna, campaign manager for Car Free Megacities, there are several things that can be done to protect people from the effects of noise pollution.

‘First, there needs to be local and national improvements made to the monitoring and reporting of noise pollution in cities,’ she told MailOnline.

‘We also need to put in place a strategy in order to address and reduce sources of noise pollution.

‘The most pressing issue that we can take action on, and in some ways we have already started, is the reduction of traffic on our roads.

‘Not only is traffic a huge source of noise pollution, it is also making significant contributions to the UK’s carbon emissions.

‘If we start ramping up efforts to reduce traffic by investing in improving public transport, encouraging a shift to active travel and reducing the number of cars on our roads, it will make our streets safer, reduce noise and air pollution and help the climate in the process.’