The UK government has ‘no intention’ of telling the public to eat less meat in the battle against climate change, claims the Environment Secretary.

Speaking in Parliament on Wednesday morning, George Eustice, Secretary of State for Environment, Food and Rural Affairs, said the government won’t force the public to stop eating meat for environmental reasons, as humans are ‘ultimately omnivores’.

He also said that it’s ‘depressing’ that the debate about meat consumption is simplified to whether it’s good or bad, because the truth is ‘more nuanced’.

Eustice was facing questions regarding the effect of livestock farming and meat consumption on the planet, which generates powerful greenhouse gases.

These gases, including carbon dioxide (CO2) and methane, trap some of the Earth’s outgoing energy, thus retaining heat in the atmosphere and warming up the planet. 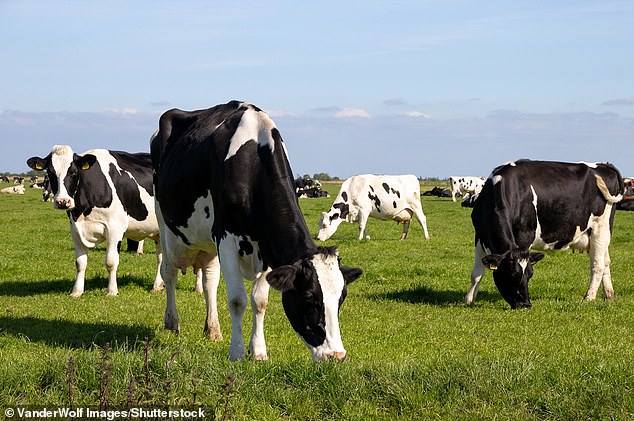 Eustice called for animals to be raised in a more ‘pasture-based system’, such as on fields and meadows (stock image)

HOW DOES EATING MEAT AND DAIRY HURT THE PLANET?

Eating meat, eggs and dairy products hurts the environment in a number of different ways.

Cows, pigs and other farm animals release huge amounts of methane into the atmosphere. While there is less methane in the atmosphere than other greenhouse gases, it is around 25 times more effective than carbon dioxide at trapping heat.

Raising livestock also means converting forests into agricultural land, meaning CO2-absorbing trees are being cut down, further adding to climate change. More trees are cut down to convert land for crop growing, as around a third of all grain produced in the world is used to feed animals raised for human consumption.

As well as this, the nitrogen-based fertiliser used on crops adds to nitrous oxide emissions. Nitrous oxide is around 300 times more effective at trapping heat in the atmosphere. These fertilisers can also end up in rivers, further adding to pollution.

‘The government is very explicit in saying that from an environmental perspective, we’re not telling people that they shouldn’t eat meat,’ Eustice told the Lords Environment and Climate Change Committee (ECCC) inquiry.

‘There are obviously lobby groups that make that case but they are what they are – they’re lobby groups with an agenda. That isn’t the government’s position.

Eustice also said the debate around meat consumption is ‘more nuanced than people would see at first sight’ and that there are different schools of ‘scientific thought’ on how removing meat from diets completely would affect the planet.

‘I find it quite depressing when people try to simplify it saying “livestock are bad therefore eat less meat”,’ the Environment Minister said.

‘It’s not as straightforward as saying “livestock is bad for the environment” – livestock done the right way is actually a positive for biodiversity.

‘A statistician would look at it and measure methane emissions from animals and take a very, almost simplistic view, which is the more animals you have the more methane they emit therefore the more environmental harm that’s done,’ he said.

Eustice called for animals to be raised in a more ‘pasture-based system’, such as on fields and meadows, as opposed to controlled environments like cages.

Daily meat consumption in the UK has fallen by 17 per cent across the last 10 years, a 2021 study found, but is still not dropping quickly enough to meet a national target.

The study, published in The Lancet Planetary Health, revealed that most people are eating less red meat and processed meat than a decade ago.

Despite the promising drop, the data from the National Diet and Nutrition Survey – which looks at 15,000 people’s eating habits – found people are eating more white meat than they were ten years ago.

Read more: Daily meat consumption in the UK is down 17% in the last decade

He also touched on some of the methods that government is interested in to reduce the amount of greenhouse gases that results from livestock farming.

For example, additives in cattle feed could act as ‘methane inhibitors’, reducing the amount of the gas that the animals emit when they graze.

Eustice said: ‘If you could do something about the diet of the ruminants rather than lecturing people, trying to tell them to eat less meat… it’s probably a better way to tackle the challenge than just lecturing people about meat-eating.

‘And the government’s got no intention of doing that.’

The Environment Minister’s comments are in contrast with statements from the Climate Change Committee (CCC), which advises the government on emissions targets.

CCC has previously said meat and dairy consumption must fall by 20 per cent by 2030 and 35 per cent by 2050 in order to achieve the UK’s net zero target.

Last October, Prime Minister Boris Johnson unveiled his plan for the UK to reach net zero emissions by the year 2050, as part of the UK’s Net Zero Strategy.

Net zero emissions means any carbon emissions from the UK would be balanced by schemes to offset an equivalent amount of greenhouse gases from the atmosphere.

The UK government has also pledged to reduce emissions by 78 per cent by 2035 compared to 1990 levels. 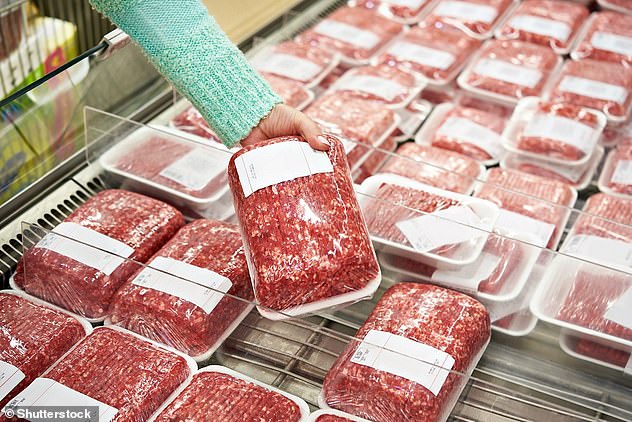 Eustice was facing questions regarding the effect of livestock farming and meat consumption on the planet, which generates powerful greenhouse gases (file photo)

Reducing greenhouse gas emissions including CO2 and methane is seen as key to achieving the aims of the Paris Agreement to limit climate change.

Adopted in 2016, the Paris Agreement aims to hold an increase in global average temperature to below 3.6ºF (2°C) and pursue efforts to limit the temperature increase to 2.7°F (1.5°C).

Hitting the Paris targets is seen as key to averting a planetary catastrophe, leading to devastation in the form of frequent climate disasters and millions of deaths.

A switch to plant-based food already appears unlikely; McDonald’s, one of the biggest meat purchasers in the world, told MailOnline in December that it has no plans to phase out beef.

MCDONALD’S: WE WON’T PHASE OUT MEAT

McDonald’s told MailOnline at the launch of its first ‘carbon neural’ restaurant in December that it has no plans to phase out meat.

McDonald’s said it’s committed to keeping beef on its menu if it is sustainably sourced, despite a transition to plant-based foods being able to cut greenhouse gas emissions.

Currently, McDonald’s is one of the largest beef purchasers in the world. Roughly 80 per cent of its total emissions come from its supply chain, in particular its use of beef, chicken, dairy and other proteins.

‘We’re not on a road-map to phase-out beef entirely; we’re on a road-map for sustainable beef,’ Beth Hart, McDonald’s vice president for supply chain and ‘brand trust’, told MailOnline.

McDonald’s recently launched the ‘McPlant’, a vegan burger made out of pea protein.