NASA’s Mars Perseverance rover has a pet ROCK! Stone that found its way into the vehicle’s wheel in February has been hitching a ride ever since

A small rock has been hitching a ride on NASA’s Perseverance rover on the surface of Mars for four months without falling off.

The rock attached itself on the Perseverance’s wheel in February and has since been transported more than 5.3 miles (8.5 km) aboard the rover, NASA has said.

Photos show the Martian fragment tucked into the front left wheel of the Perseverance rover, which landed on the surface of Mars in February last year.

The photos of the rock were taken by the rover’s front cameras used to navigate hazards, called ‘Hazcams’.

NASA said the ‘unexpected traveling companion’ isn’t doing any damage to the wheel, although it could drop off at any time.

Perseverance can only go up to 0.07 miles per hour (0.12 km per hour), which may just be slow enough to stop it from falling off.

Prior to being caught on Perseverance’s wheels, the rock could have been in the same spot for millions of years. 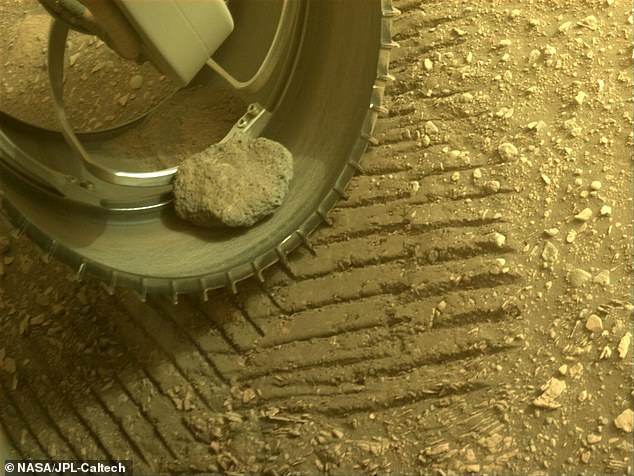 The Mars rock can be seen on the front left wheel of Perseverance on May 26, 2022 (sol 449) beside track marks in the Martian surface 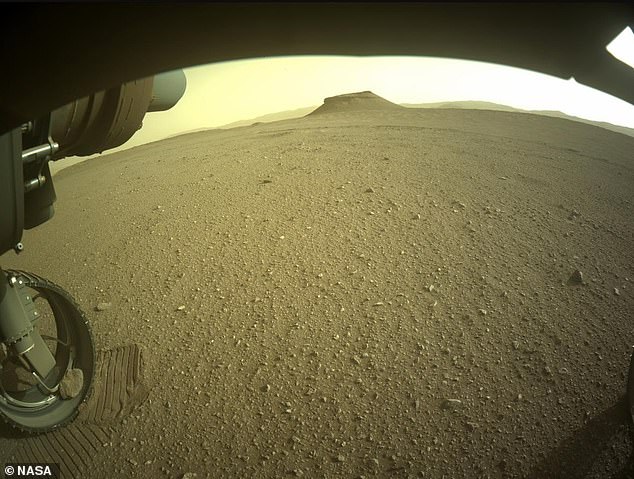 There are 23 cameras mounted to the Perseverance rover including:

The engineering cameras give detailed information in colour about the terrain the rover has to cross.

They measure the ground for safe driving, check out the status of hardware and support sample gathering.

There are Hazcams for hazard detection and Navcams for navigation.

Science cameras record in more detail and can even capture 3D images.

The Mastcam-Z on a 2 metre arm has a zoom feature for focusing on distant objects and can film video.

The Supercam fires a laser at mineral targets beyond the reach of the rovers arm to analysed the chemical composition of the rock.

Perseverance touched down on Mars’ Jezero Crater on February 18, 2021 after a nearly seven-month journey through space.

The car-sized Mars rover is tasked with seeking traces of fossilised microbial life from Mars’ ancient past and to gather rock specimens for return to Earth.

Last month, it reached a key phase of its mission – climbing up an ancient delta known as ‘Three Forks’.

One sol lasts 24 hours, 39 minutes and 35 seconds – slightly longer than an Earth day. As of Wednesday (June 8), Perseverance has been on Mars for 462 sols.

On sol 341, Perseverance was still working on its first science campaign focused on picking up samples from the Jezero crater floor.

‘We examined rocks that are part of the Máaz formation, which we believe is made up of lava flows,’ NASA said in a statement.

Martian rocks are so variable on the red planet’s surface that if this pet rock were to fall off the wheel so far from its original location, it could stick out if a ‘Martian geologist from the future’ were to encounter it.

‘It’s possible that the rock may fall out at some point along our future ascent of the crater rim,’ NASA said.

‘If it does so, it will land amongst rocks that we expect to be very different from itself.’

The public can track the route taken throughout Perseverance’s 462-sol journey using an online interactive map on NASA’s website, which uses dots to denote where the rover stopped.

‘Engineers created this experience with software used by the mission team who decide where Perseverance will explore, and how to get there,’ NASA said.

‘Each dot represents the end point of a drive and is labelled with the day, or sol, on Mars, that the rover stopped.’ 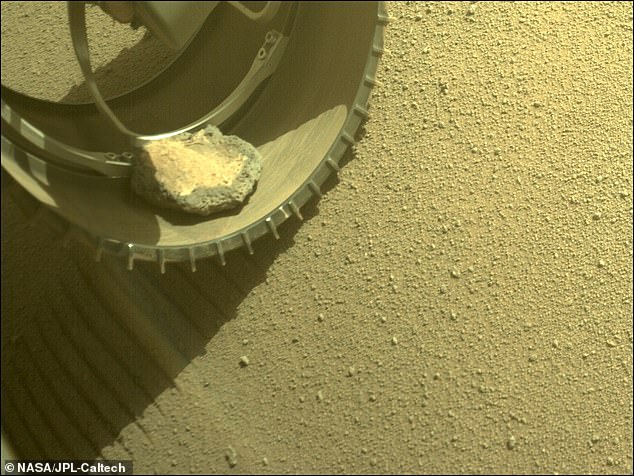 The same rock is seen in an image acquired on February 6, 2022 (sol 343). Photos were taken by the rover’s front cameras used to navigate hazards, called ‘Hazcams’

This is not the first time a rock has hitched a ride on a Mars rover mission; 18 years ago, a ‘potato-sized’ rock found its way into the Spirit rover’s rear right wheel, and had to be dislodged.

Five years ago, the front right wheel of the the Curiosity rover also periodically picked up its own rocky traveling companion.

‘While it’s unclear exactly how long these rocks stuck around, they tended to hop off after a few weeks,’ NASA said.

‘Perseverance’s current companion is therefore on its way to setting Mars hitch-hiking records.’

It’s Perseverance’s job to collect rocks, but the hitchhiking rock was not meant to be one of them. Perseverance captured its first rock sample last September.

The rover has turret-mounted scientific instruments that are able to determine chemical and mineral composition and look for organic matter, as well as better characterise the planet’s geological processes.

It uses a drill and a hollow coring bit at the end of its 7-foot-long (2-meter-long) robotic arm to extract samples slightly thicker than a pencil, which it stores under its belly.

However, Perseverance is not bringing the samples back to Earth – the rover is stashing in certain locations on Mars them to be collected by a future retrieval mission, which is currently being developed. 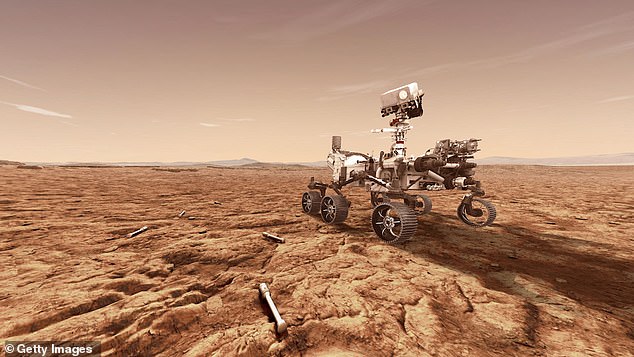 It was in February last year that Perseverance touched down on Mars’ Jezero crater, which scientists believe was once home to an ancient river delta

One option involves NASA and ESA launching two more spacecraft that would leave Earth in 2026 and reach Mars in 2028.

The first will deploy a small rover, which will make its way to Perseverance, pick up the filled sampling tubes and transfer them to a ‘Mars ascent vehicle’ – a small rocket.

This rocket will blast off – in the process becoming the first object launched from the surface of Mars – and place the container into Martian orbit, meaning it will essentially be floating in space.

At this point, the third and final spacecraft involved in the tricky operation will manoeuvre itself next to the sample container, pick it up and fly it back to Earth. 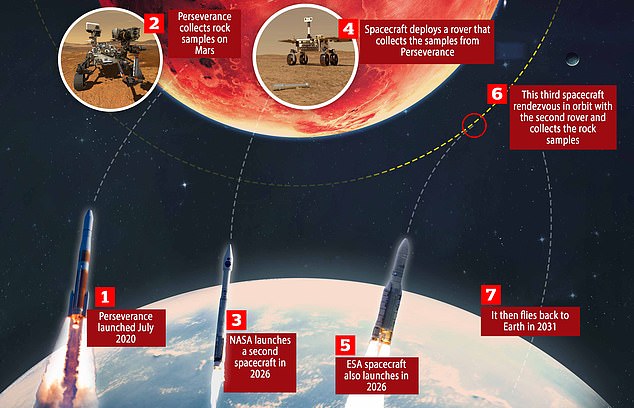 Providing its re-entry into the Earth’s atmosphere is successful, it will plummet to the ground at a military training ground in Utah in 2031, meaning the Martian samples likely won’t be studied for about another decade.

The copter has performed a series of nearly 30 flights of increasing complexity on the red planet, the most recent in April this year.

Ingenuity, which is just 18-inches tall, made its first flight on April 19, 2021, making history as the first powered controlled flight on another planet.

Flight one: April 19, 2021 with a vertical takeoff up to 9.8ft, stationary hover and a landing

Flight two: April 22, 2021 with a vertical takeoff up to 16ft, hover, then shift westward for 14ft before returning and landing

Flight three: April 25, 2021 with a vertical takeoff up to 16ft, hover, shift northwards for 328ft at an airspeed of 2 m/s before returning to land

Flight nine: July 5, 2021 with a record length of 2,050ft southwest over a prospective research location at 16ft per second.

Flight eleven: August 5, 2021 by flying 1,250ft for 130 seconds in preparation for a series of reconnaissance missions for the Perseverance rover.

Flight thirteen: September 5, 2021 by flying 690ft for 160.5 seconds, climbing 26ft over one particular ridgeline over the ‘South Seitah’ region of Mars.

Flight fifteen: November 6, 2021 by flying back towards its original landing site. It flew for a total of 128 seconds at an estimated 11mph.

Flight seventeen: December 5, 2021 by flying back toward the Wright Brothers Field at the Octavia E. Butler landing site. It flew 614ft (187m) for a total of 117 seconds at an estimated 6mph.