Revealed: The British towns at risk of being wiped off the map FOREVER by rising seas and coastal erosion – as official in charge of flood defences warns some communities will have to relocate

Some of Britain’s seaside towns and villages may have to be abandoned because of rising seas and coastal erosion – but it is too early to say which communities these will be.

That was the warning from the official in charge of Britain’s flood protection today, who acknowledged that relocating people from coastal areas ‘would be controversial’.

Sir James Bevan, chief executive of the Environment Agency, said a conversation had to be started on the issue, ‘not least because we owe it to the threatened communities themselves to help them decide what they want their long-term future to be.’

But he stressed that it was ‘far too early to say which communities will have to move’ and that ‘no one should be forced from their homes against their will’.

Places that are already known to be under threat from rising tides include Fairbourne in Wales and Happisburgh in Norfolk. 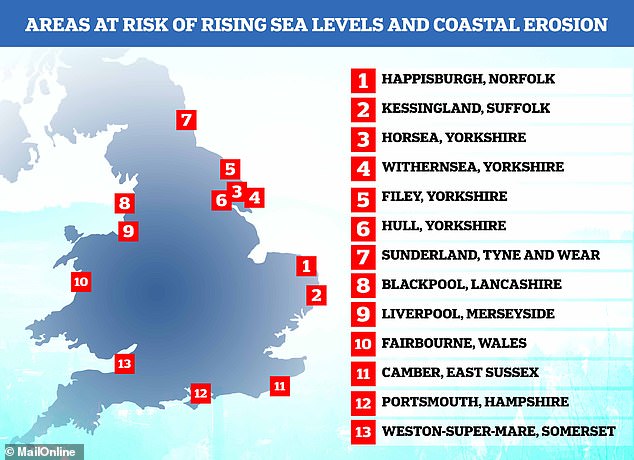 Warning: Some of Britain’s seaside towns and villages may have to be abandoned because of rising seas and coastal erosion, the Environment Agency (EA) chief executive has said. Data from the EA’s National Coastal Erosion Risk Mapping project and Climate Central suggest the places under threat include Fairbourne in Wales and Happisburgh in Norfolk, among others 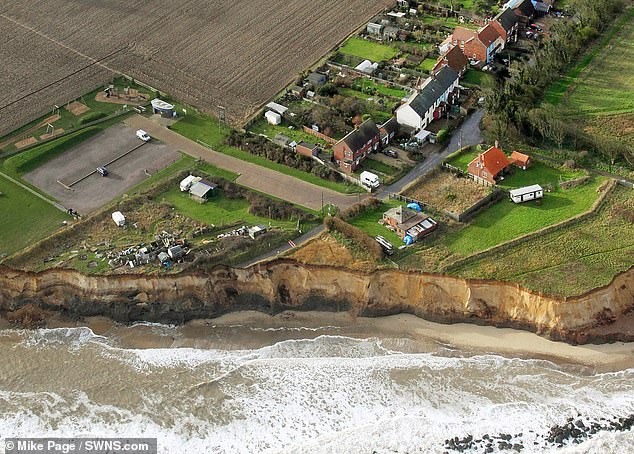 In Happisburgh, Norfolk (pictured) houses that were once 20ft from the sea are now on a cliff edge 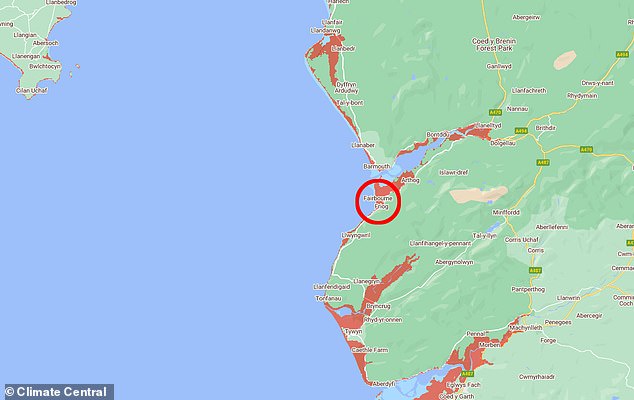 Places under threat from rising tides include Fairbourne in Wales (pictured centre). Gwynedd council has told Fairbourne, which has around 410 homes, that it will only keep sea defences going until 2050, and will start to ‘decommission’ the village before then, moving villagers out 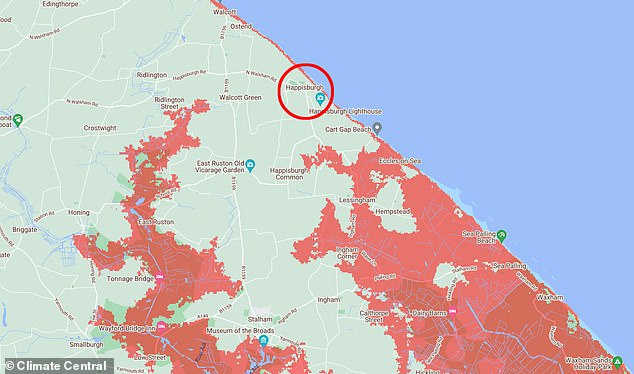 In Happisburgh, Norfolk, home to around 900 people, houses that were once 20ft from the sea are now on a cliff edge. The village has lost 35 homes to erosion over the past two decades

WHICH PARTS OF THE ENGLISH COASTLINE WILL BE THE WORST HIT BY EROSION?

Figures published in 2019 by confused.com, based on data collected by the Environmental Agency’s National Coastal Erosion Risk Mapping project, suggest the following areas of England’s coastline will be the worst hit by erosion:

Gwynedd council has told Fairbourne, which has around 410 homes, that it will only keep sea defences going until 2050, and will start to ‘decommission’ the village before then, moving villagers out.

In Happisburgh, home to around 900 people, houses that were once 20ft from the sea are now on a cliff edge. The village has lost 35 homes to erosion over the past two decades.

Figures published in 2019 by confused.com, based on data collected by the Environmental Agency’s National Coastal Erosion Risk Mapping project, also show that Kessingland in Suffolk, Hornsea and Withernsea in Yorkshire and Camber in East Sussex are likely to suffer the most coastal erosion over the next 20 years.

Sunderland, Filey in North Yorkshire, Pevensey Bay in East Sussex and Shoreham-By-Sea and Bognor Regis in West Sussex also made the top 10 list.

Many of the areas, including Filey and Scarborough, are among the most sought-after for second homes snapped up by wealthy Londoners.

This desire only heightened with the Covid pandemic, with residents of the most popular towns complaining about how soaring house values are pricing young people out of the housing market.

Experts found that the east coast is being hardest hit by erosion, with the rate the fastest in Yorkshire and the Humber, where 56 per cent of the coastline is at risk.

Sea levels around the UK have risen by 15.4cm since 1900, and the Met Office predicts modern levels could increase a further 1.12m by 2100, threatening communities on sea cliffs and coastal floodplains around much of the east and south coast of England.

The west of Wales and north-west England could also be hit.

It means some coastal communities will have to be moved away from danger caused by the ‘inevitable impacts of a rising sea level’, Sir James told the Flood and Coast Conference in Telford, Shropshire.

He added that the growing threat of rising seas and rivers means we will not be able to defend homes with walls of concrete.

Instead we should give up and let them be swallowed by the encroaching waters.

‘In the long term, climate change means that some of our communities – both in this country and around the world – cannot stay where they are,’ Sir James said.

‘While we can come back safely and build back better after most river flooding, there is no coming back for land that coastal erosion has taken away. Or which a rising sea level has put permanently or frequently under water.’

Although he would not say which communities were at risk of being relocated, an interactive map shows the British seaside spots that could potentially be wiped out by 2050 if sea levels continue to rise because of global warming.

The map, created by US climate news website Climate Central, suggests that some people in Liverpool, Hull, Blackpool and along the Norfolk coast could lose their homes by 2050.

Other areas that could be permanently underwater include parts of South Wales, Gloucester, Weston-super-Mare, Portsmouth and huge swathes of East Anglia.

The Environment Agency has set out its risk management strategy to help get the nation ready for flooding and coastal change.

Actions include producing a national assessment of flood risk, an updated coastal erosion risk map and long-term investment scenarios to better inform future decisions as part of a £5.2billion investment by 2027. 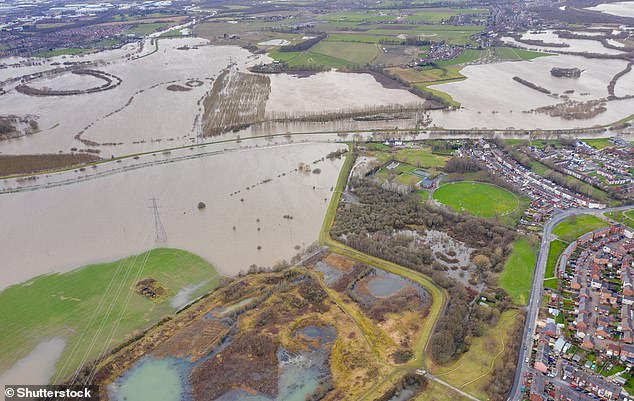 Sea levels are already rising now due to human activities that emit greenhouse gases. Here, an aerial drone photo of the town of Allerton Bywater near Castleford in Leeds, West Yorkshire shows the flooded fields from the River Aire 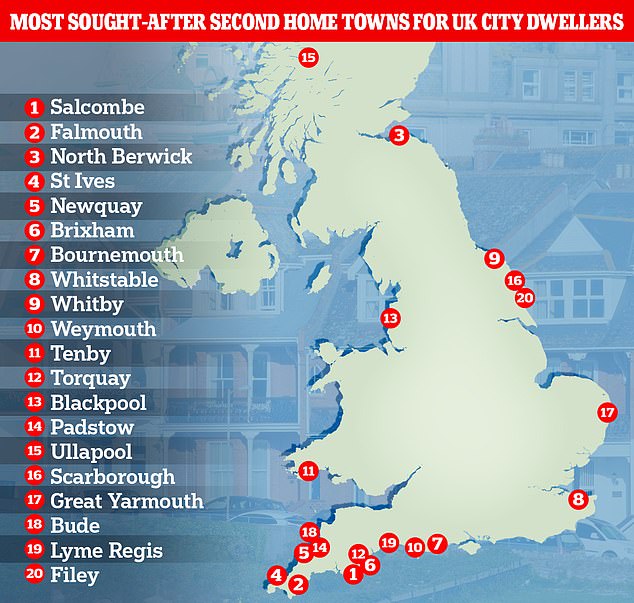 Many of the under threat areas, including Filey and Scarborough in Yorkshire, are among the most sought-after for second homes snapped up by wealthy city dwellers. This map shows the seaside towns where there is the most demand for second homes

Professor Andrew Shepherd, director of the Centre for Polar Observation and Modelling at the University of Leeds, said: ‘With every centimetre of sea level rise, 2 to 3 million more people worldwide experience coastal flooding each year.

‘In the UK alone, a million citizens will be exposed to annual flooding by the end of this century, and so its right to start a planned retreat from the most vulnerable parts of our shoreline.’

Professor Jim Hall, of the University of Oxford, said: ‘The Environment Agency is recognising that the coast is inevitably going to be impacted by sea level rise.

‘Even if the Environment Agency could afford to build coast protection everywhere – which they cannot – the things that many people cherish about the coast, like beaches and sand dunes, will eventually become submerged, unless we start to plan now for how the coastline can adjust to rising sea levels.

‘There need to be honest conversations within coastal communities about what the future holds, and a strategic approach to deciding how to manage the coast sustainably in the future.’

Global sea levels could rise as much as 10ft (3 metres) if the Thwaites Glacier in West Antarctica collapses.

Sea level rises threaten cities from Shanghai to London, to low-lying swathes of Florida or Bangladesh, and to entire nations such as the Maldives.

The collapse of the glacier, which could begin with decades, could also submerge major cities such as New York and Sydney.

Parts of New Orleans, Houston and Miami in the south on the US would also be particularly hard hit.

A 2014 study looked by the union of concerned scientists looked at 52 sea level indicators in communities across the US.

It found tidal flooding will dramatically increase in many East and Gulf Coast locations, based on a conservative estimate of predicted sea level increases based on current data.

The results showed that most of these communities will experience a steep increase in the number and severity of tidal flooding events over the coming decades.

By 2030, more than half of the 52 communities studied are projected to experience, on average, at least 24 tidal floods per year in exposed areas, assuming moderate sea level rise projections. Twenty of these communities could see a tripling or more in tidal flooding events.

The mid-Atlantic coast is expected to see some of the greatest increases in flood frequency. Places such as Annapolis, Maryland and Washington, DC can expect more than 150 tidal floods a year, and several locations in New Jersey could see 80 tidal floods or more.

In the UK, a two metre (6.5 ft) rise by 2040 would see large parts of Kent almost completely submerged, according to the results of a paper published in Proceedings of the National Academy of Science in November 2016.

Areas on the south coast like Portsmouth, as well as Cambridge and Peterborough would also be heavily affected.

Cities and towns around the Humber estuary, such as Hull, Scunthorpe and Grimsby would also experience intense flooding.