The ulti-mutt summer accessory! Vet advises dogs to wear SUNGLASSES to protect their eyes while on the beach

We all know that it is important to keep our dogs feeling cool on sunny days – but it turns out they should be looking it too!

Vets from Eastcott Veterinary Referrals in Swindon are recommending owners to pick up a pair of sunglasses if their dog is sensitive to bright light or has recently had eye surgery.

The dogs should have a specially designed visor or sunglasses fitted to their head, so they can enjoy the sunny days outside safely.

Ida Gilbert, head of ophthalmology at Eastcott, said: ‘Sunglasses for dogs may seem peculiar but it is a viable solution to help pets in situations where their eyes need protection or may need that extra bit of support because of surgery or a previous trauma.

‘There are certain conditions in dogs which worsen from exposure to UV light such as pannus, an immune-mediated condition affecting the cornea or clear part of a dog’s eye.

‘Dogs with such conditions may be able to reduce the need for topical medications if sunglasses or a visor is worn.’

They provide an alternative to the inflatable or cone collars that stop dogs from pawing at their injury – the latter made famous as the “cone of shame” from Disney Pixar’s Up . 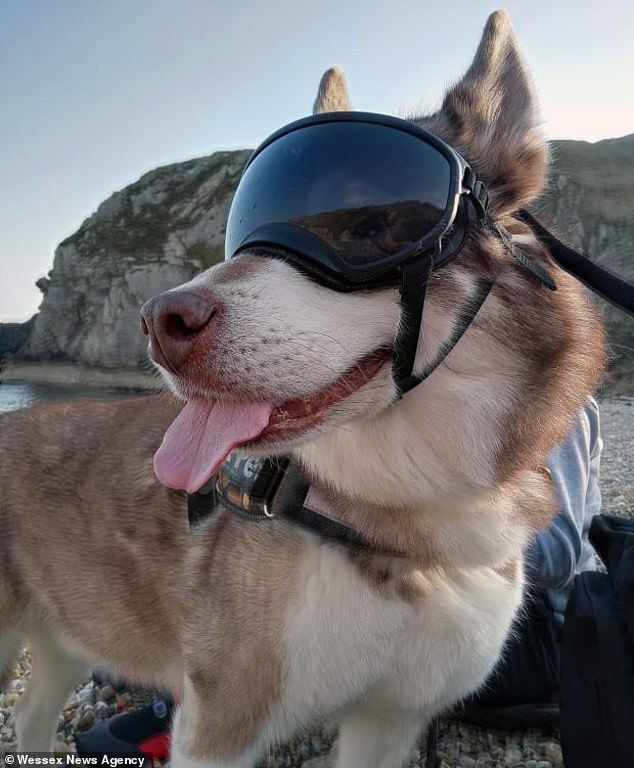 Duke, a six-year-old Siberian Husky-Malamute crossbreed, wears goggles to protect his left eye that has cataracts 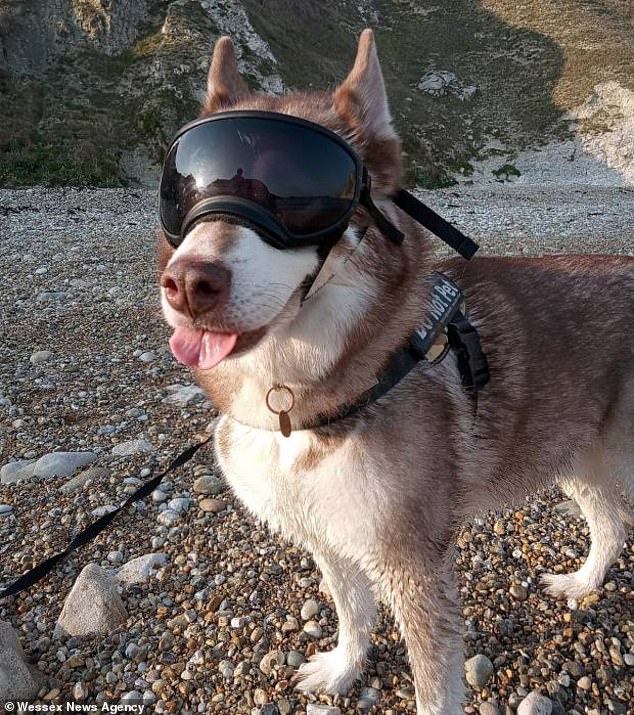 Duke has suffered with cataracts and other eye conditions since he was just 18 months old and has already had his right eye removed, so was prescribed some fetching tinted goggles 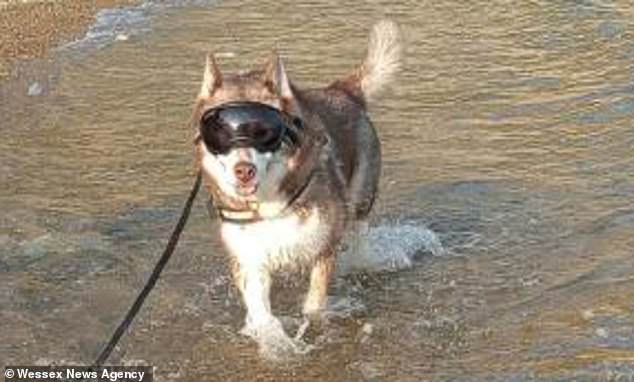 WHY ARE DOGS WEARING SUNGLASSES?

Vets are advising dog owners to get a pair of sunglasses for their pooch if they are sensitive to sunlight.

This could be due to a condition like cataracts or iris atrophy, the latter causing ocular pain in glaring light.

They may also need protection after going through eye surgery – both from the sun’s rays and their own paws.

While the tinted glasses may look fun and come in an array of designs, vets say they should not be viewed as fashion accessories. 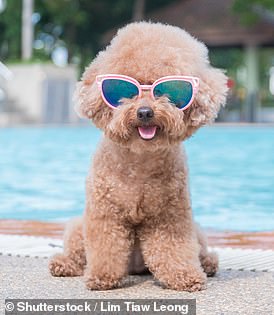 Sunglasses recommended by vets can protect dogs’ eyes from the sun

The polarised sunglasses are coated with a chemical filter that blocks light waves bouncing off horizontal surfaces to cut glare.

Experts at the veterinary hospital have recently helped two dogs recovering from eye surgery try out a pair of protective specs.

Amy Wilson says Duke, her six-year-old Siberian Husky-Malamute crossbreed, has suffered with cataracts and other eye conditions since he was just 18 months old and has already had his right eye removed.

The dog owner from Shaftesbury in Dorset said: ‘It’s vitally important to protect Duke’s left eye, so when Ida recommended RexSpecs I thought “Whatever you say, you are the expert!”

‘At first, though, Duke did not want to wear them and tried everything to get them off, including rubbing against my leg, the sofa, the floor and shaking his head.

‘Now he is much more accepting and has two pairs – a tinted pair for sunny days and when he goes to the beach and a clear pair to protect his eye on more shady days.

‘I’ve had plenty of comments from passers-by like “Why’s your dog wearing sunglasses?” and “Oh your dog’s wearing ski goggles.”

‘I would recommend them to other dog owners whose pets have serious eye problems.’

Celine, a 14-year-old miniature poodle, suffers from iris atrophy and is unable to constrict her pupils in bright light.

This causes the dog to be almost blinded by the glare and experience photophobia or ocular pain as a result.

Her owner Miluse Vojtiskova, from Swindon, said: ‘My dog Celine suddenly began behaving abnormally while we were out on walks.

‘She was extremely nervous, sometimes she would freeze in her tracks and other times she was very jumpy, alarmed, and distressed.

‘When Ida suggested sunglasses, I was dubious but then she showed me some photographs and convinced me.

‘I introduced them to Celine gradually, at the beginning just fitting her with the frames and getting her used to that, encouraged with a treat or two.

‘Then I tightened the straps a bit more and finally I added the lenses and took her for a walk. 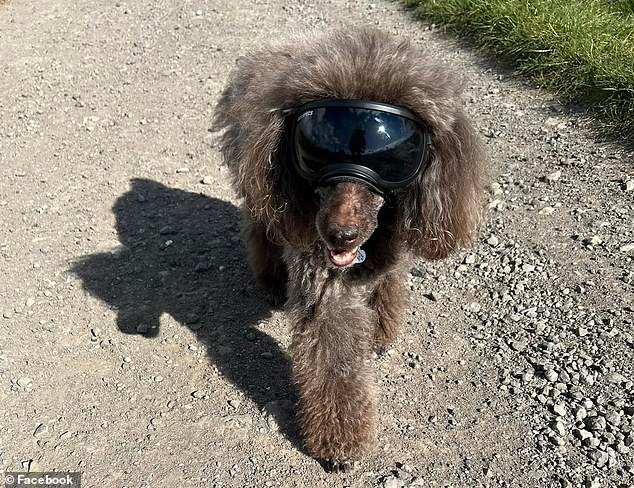 Celine, a 14-year-old miniature poodle, suffers from iris atrophy and is unable to constrict her pupils in bright light, so has been given a pair of sunglasses to help her deal with the glare 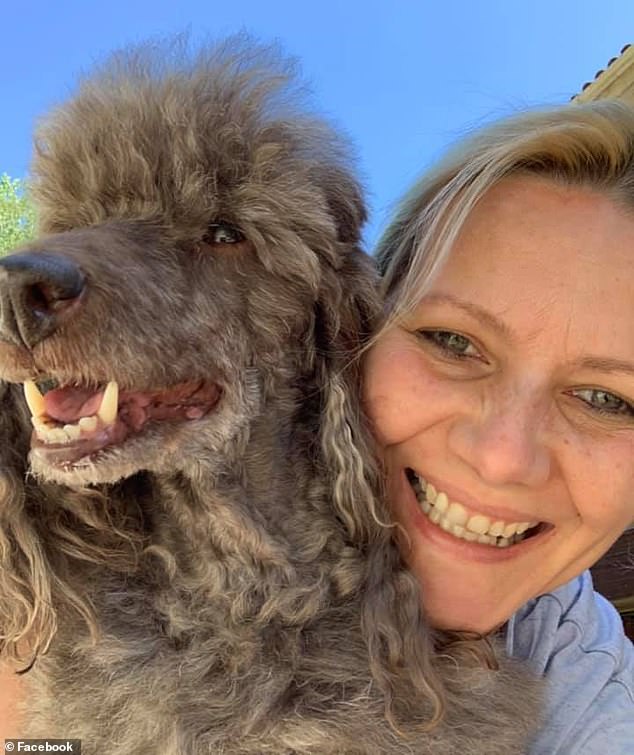 Celine and her owner Miluse Vojtiskova are thrilled with the new goggles, as before they could only go out for walks together at night or when the sun was at its lowest

‘Naturally, her first instinct was to try to get them off but after a few more treats and a lot of perseverance she is fine with them and they are working so well.

‘This simple solution meant we didn’t have to alter our everyday routine and only take her for walks at night or when the sun was at its lowest.’

Vet Ida says that, while the tinted glasses may look fun and come in an array of designs, they should not be viewed as fashion accessories.

‘It is important they have a thorough examination and a proper diagnosis before trying them out,’ she added

‘Some animals with reduced vision can benefit from improved confidence as they can sense their surroundings better through the visor, whilst others may find it easier to eat and drink than when they wear a more traditional buster collar after surgery.

‘Used alongside surgical treatments for eye conditions, the addition of glasses and visors is part of the patient’s wider care plan.

‘It may not be an option for everyone, as the dog will need some training, but it is an alternative and appropriate solution for many and a good aid to recovery.’