Humanoid robot soldiers that come alive in virtual reality (VR) are set to be used to train British Army paratroopers for combat.

Troops at 16 Air Assault Brigade will be put through their paces at a special VR training experience at their facilities in Colchester, Essex.

In real life, the humanoids look like mannequins, but in virtual reality they appear as avatars of enemy fighters. 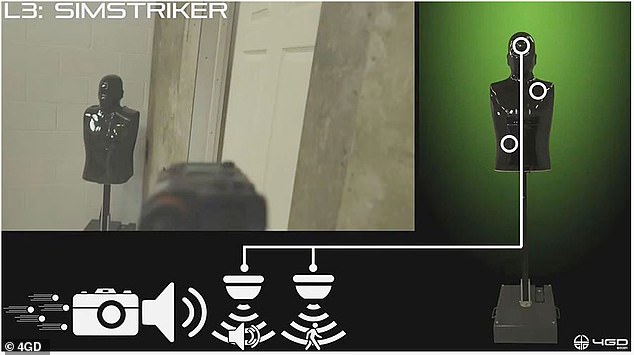 The robots, which look like shop mannequins, are packed with sensors and emit the sounds of enemy voices

The ‘humanoid robotic targets’, called SimStrikers, are armed with BB gun-style pellets that they fire at the troops whilst shouting in foreign languages.

SimStrikers can be networked into a ‘synthetic environment’ so the target appears as a digital avatar of a physical adversary.

Real-life actions are reflected in the 3D environment so, when the robot is engaged and drops, the avatar inside the simulation does so too.

British defence firm 4GD is supplying 10 of the SimStrikers to the 16 Air Assault Brigade, which is a unit of the British Army based in Colchester.

‘We are excited to officially introduce SimStriker to the market and continue supporting the British Army with high-tech solutions for impactful and data-driven close combat training,’ said Rob Taylor, founder of 4GD.

‘4GD’s SimStriker takes a bold step away from traditional wooden targets towards a new generation of smart-adversaries which add realism to simulations, can assess the effectiveness of our soldiers with mathematical precision and, ultimately, help boost their urban warfare capabilities.’

The humanoid mannequins can rotate to face the elite troops as they enter the buildings and also drop downwards onto their base when they engage fire or are shot at.

When this happens, in virtual reality it appears that the adversary is falling to the ground after being hit by bullets.

High tech instruments inside the mannequin can also pick up movement, light and sound, enabling the target to vocally respond.

SimStrikers can shout and scream in different languages, including in Russian and Arabic.

Sensors on the mannequin also to record trainees’ fire rate and accuracy during the training scenarios.

In another room in the training complex, troops can also look out a window and see a virtual war zone that replicates real cities.

‘When you get into a building and clear a block of flats, you then go to the windows and look into the virtual world,’ Taylor told the Times.

‘Then you can be in Kyiv and firing javelins and sniper rifles.’ 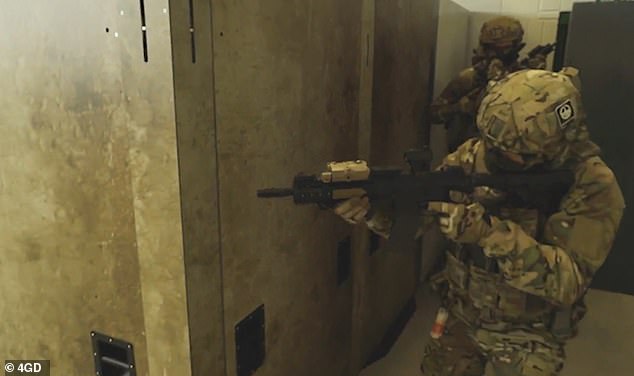 Troops at 16 Air Assault Brigade will be put through their paces at a special VR facility in Colchester, Essex where they see the robots as real troops

Audio and scents can also enhance the realism, such as the sound of church bells or the smell of a desert.

4GD aims to increase the quality of training ‘through the blend of virtual and reality,’ the firm says on its website.

‘4GD are redefining the future of immersive close combat training,’ the firm says.

‘At the heart of this is the drive to achieve operational excellence through immersive, realistic and flexible facilities.’

The Royal Air Force has released a 360-degree video designed for virtual reality (VR) headsets that places viewers in the middle of a typical day’s action.

The six-minute-long video transports viewers under a C-130 Hercules aircraft as it soars noisily overhead moments prior to landing.

Viewers are also given an exclusive look inside the cargo bay of an RAF C-17 aircraft, taken to the scene of a serious road traffic accident and put in the middle of a chaotic counterintelligence operation.

They can also stand in the hangar of a major RAF airfield and admire the huge propellers of the 150-foot-long A400M military transport aircraft.