Hundreds of Ancient Egyptian artefacts including 2,500-year-old painted sarcophagi with mummies inside and bronze statues of deities unearthed at the necropolis of Saqqara go on display near Cairo

Egyptian authorities have displayed a trove of ancient artefacts dating back 2,500 years that were excavated at the ancient village of Saqqara near Cairo.

The artefacts were showcased on Monday at a makeshift exhibit at the feet of the Step Pyramid of Djoser – the oldest pyramid in Egypt – in Saqqara, 15 miles southwest of the Egyptian capital.

The stunning collection includes 250 painted sarcophagi with well-preserved mummies inside, as well as 150 bronze statues of ancient deities.

One sarcophagus contained a well-preserved papyrus written in hieroglyphs, perhaps verses of the Book of the Dead, authorities at Egypt’s Supreme Council of Antiquities claim. 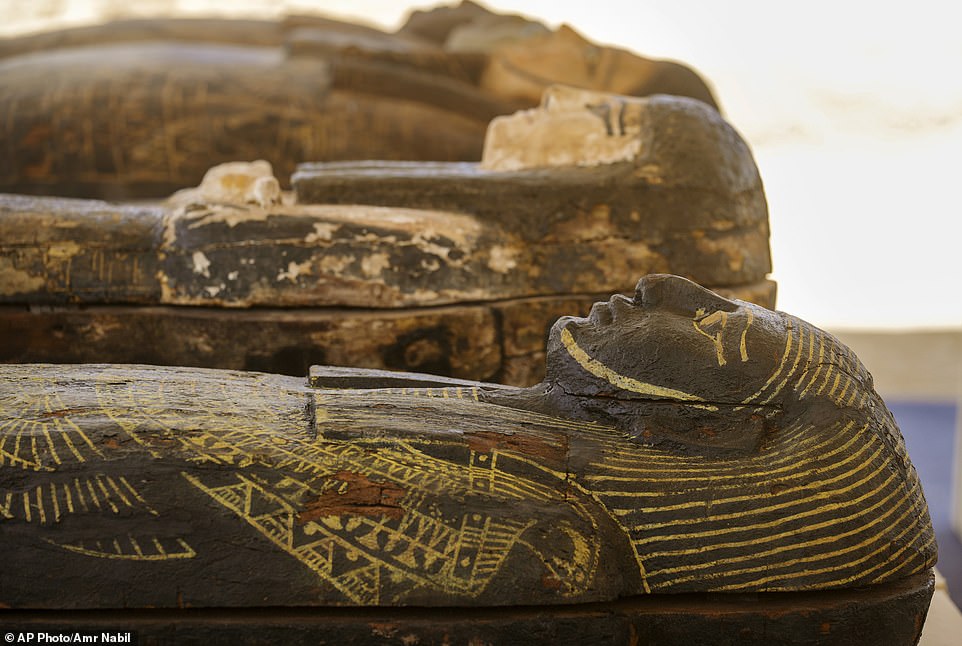 Painted coffins with well-preserved mummies inside, dating back to the Late Period of ancient Egypt around 500 B.C, are displayed at a makeshift exhibit at the feet of the Step Pyramid of Djoser in Saqqara, 24 kilometers (15 miles) southwest of Cairo, Egypt 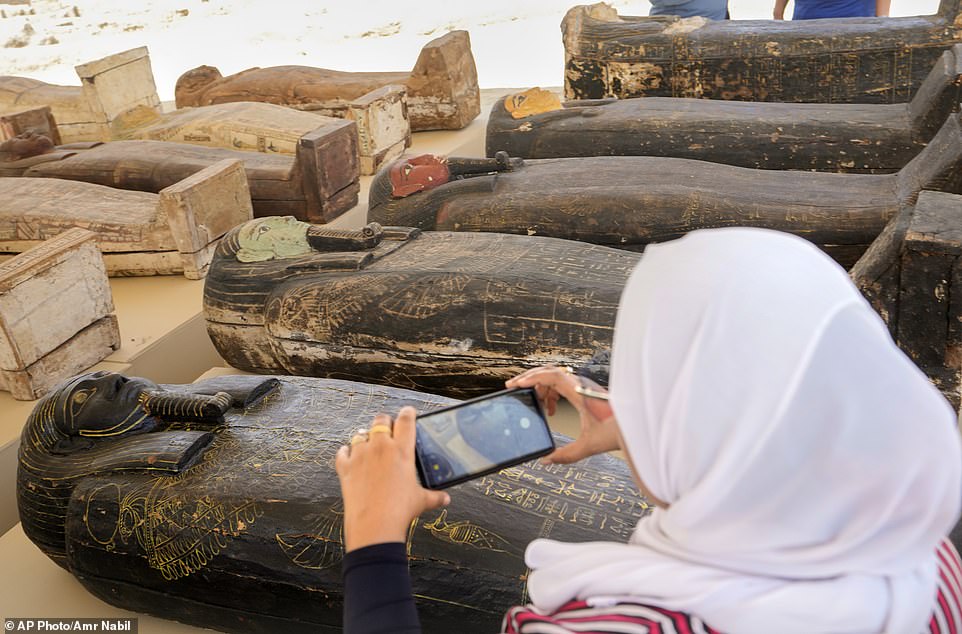 A reporter films painted coffins with well-preserved mummies inside, dating back to the Late Period of ancient Egypt around 500 BC 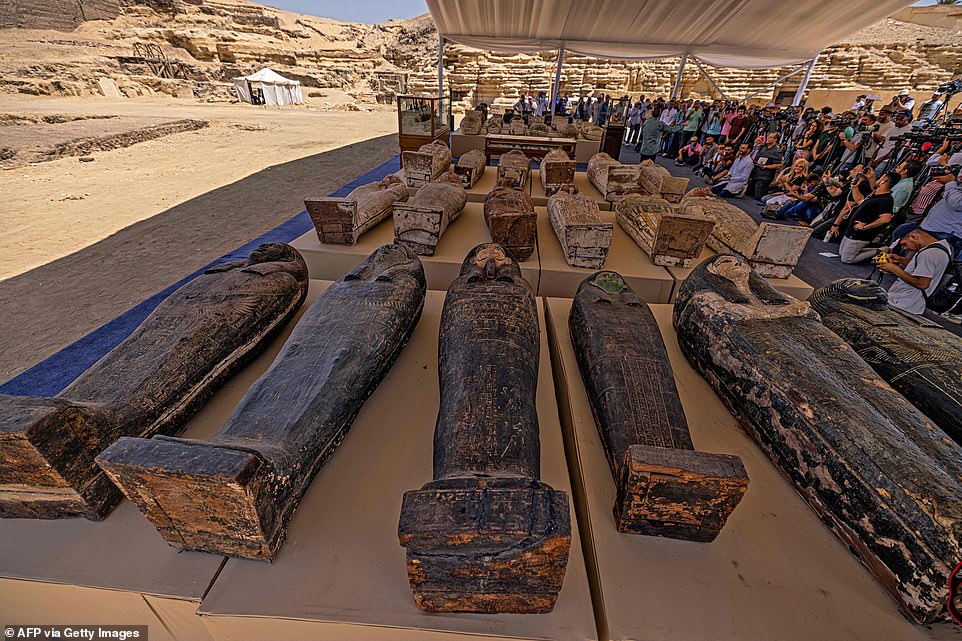 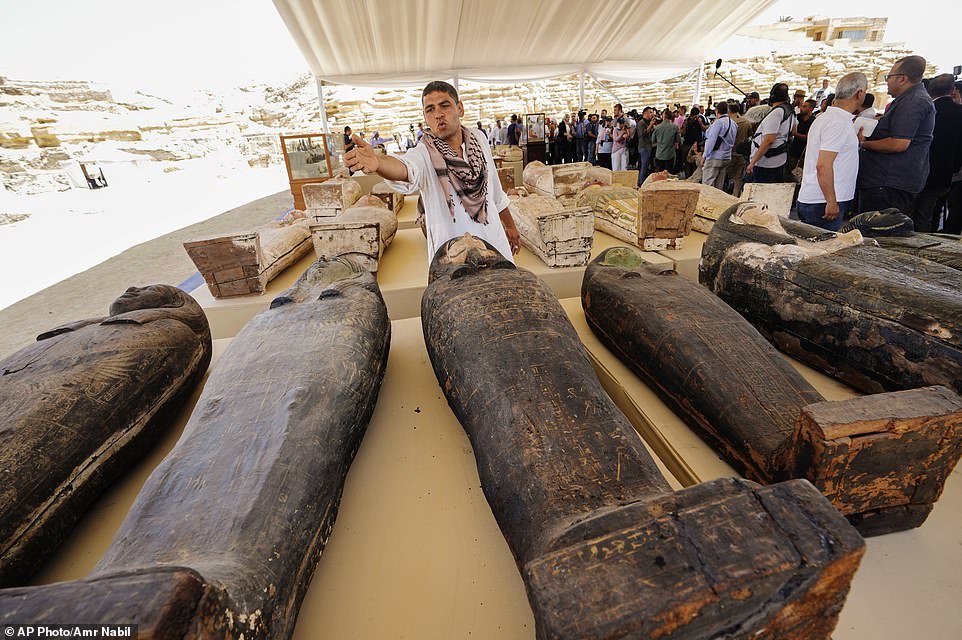 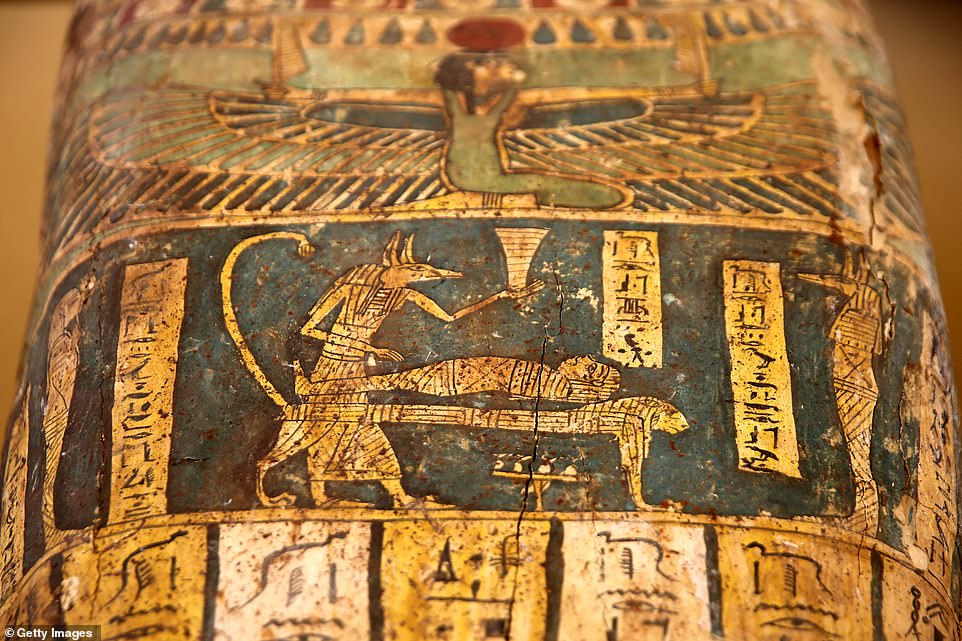 250 sarcophagi with stunning detail at the archaeological site of Saqqara, south of Cairo, becomes the latest in a series of discoveries in the region 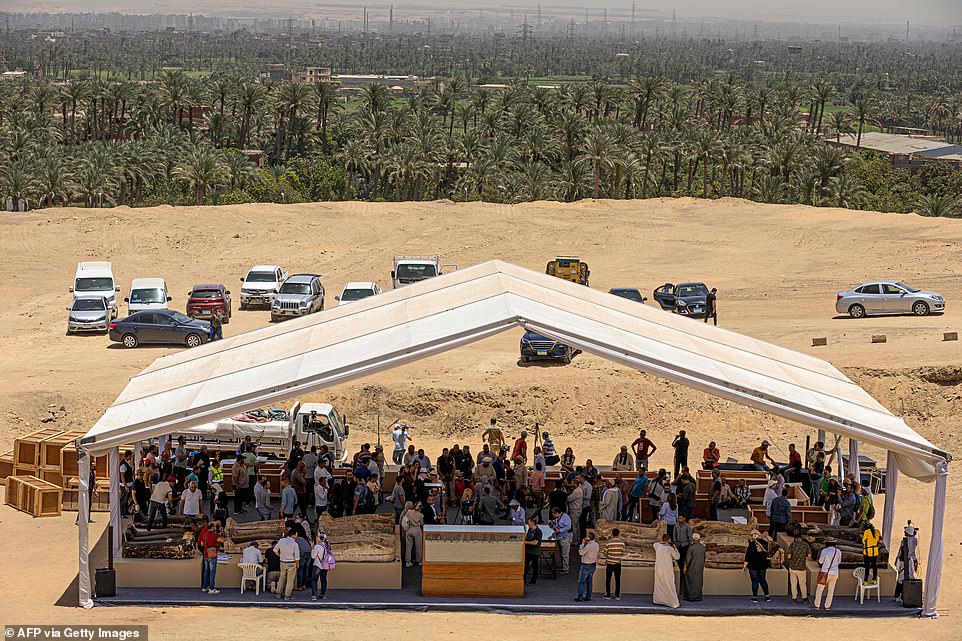 Saqqara is famous as an Egyptian village that contains ancient burial grounds of Egyptian royalty.

Saqqara contains numerous pyramids, including the Step Pyramid of Djoser, widely believed to be the oldest pyramid in the world.

The site extends along the edge of the desert plateau for about 5 miles (8 km), bordering Abū Ṣīr to the north and Dahshūr to the south.

In 1979 the ancient ruins of the Memphis area, including Ṣaqqārah, Abū Ṣīr, Dahshūr, Abū Ruwaysh, and the Pyramids of Giza, were collectively designated a UNESCO World Heritage site.

Also included are bronze vessels used in rituals of Isis, the goddess of fertility in ancient Egyptian mythology.

The artefacts – uncovered following extensive digging at Saqqara – date from the Late Period, about 500BC, according to Mostafa Waziri, secretary-general of the Supreme Council of Antiquities of Egypt.

‘I’m very proud that the discovery was made by Egyptians, and this will not be the last discovery here,’ Waziri said.

A headless bronze statue of Imhotep, who was chief architect to the Egyptian pharaoh Djoser, who ruled ancient Egypt between 2630BC and 2611BC, was also displayed on Monday.

Imhotep was responsible for the Step Pyramid of Djoser, situated at Saqqara and widely believed to be the oldest pyramid in the world.

Covering an area of around 4.3×0.9 miles, Saqqara is famous as an Egyptian village that contains ancient burial grounds of Egyptian royalty.

Saqqara is part of a sprawling necropolis at Egypt’s ancient capital of Memphis that includes the Giza Pyramids and the smaller pyramids at Abu Sir, Dahshur and Abu Ruwaysh.

The artefacts will be moved for a permanent exhibit at the new Grand Egyptian Museum, a major project still under construction near the Giza Pyramids, just outside Cairo.

Egypt has been heavily promoting recent archaeological finds, hoping to attract more tourists to the country.

Its tourist sector, a major source of foreign currency, suffered from years of political turmoil and violence following the 2011 uprising that toppled autocrat Hosni Mubarak.

The sector has recently started to recover from the coronavirus pandemic, only to be hit again by the effects of Russia’s war on Ukraine. Along with Russia, Ukraine is a major source of tourists visiting Egypt.

Grand Egyptian Museum, when it opens in November 2022, will be the ‘new crown jewel of Egypt’ and one of the largest museums in the entire world, according to the museum’s webpage. 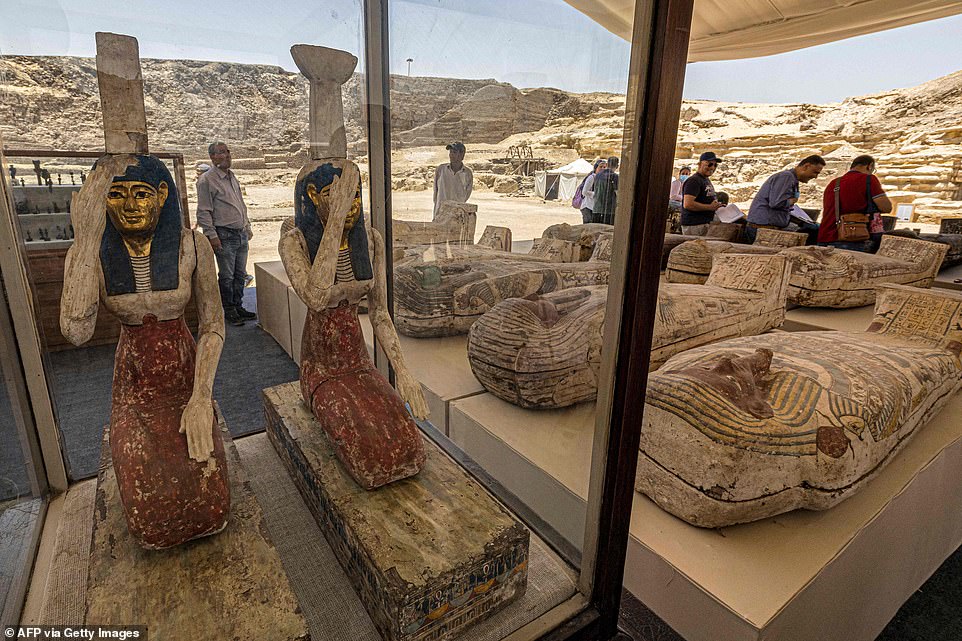 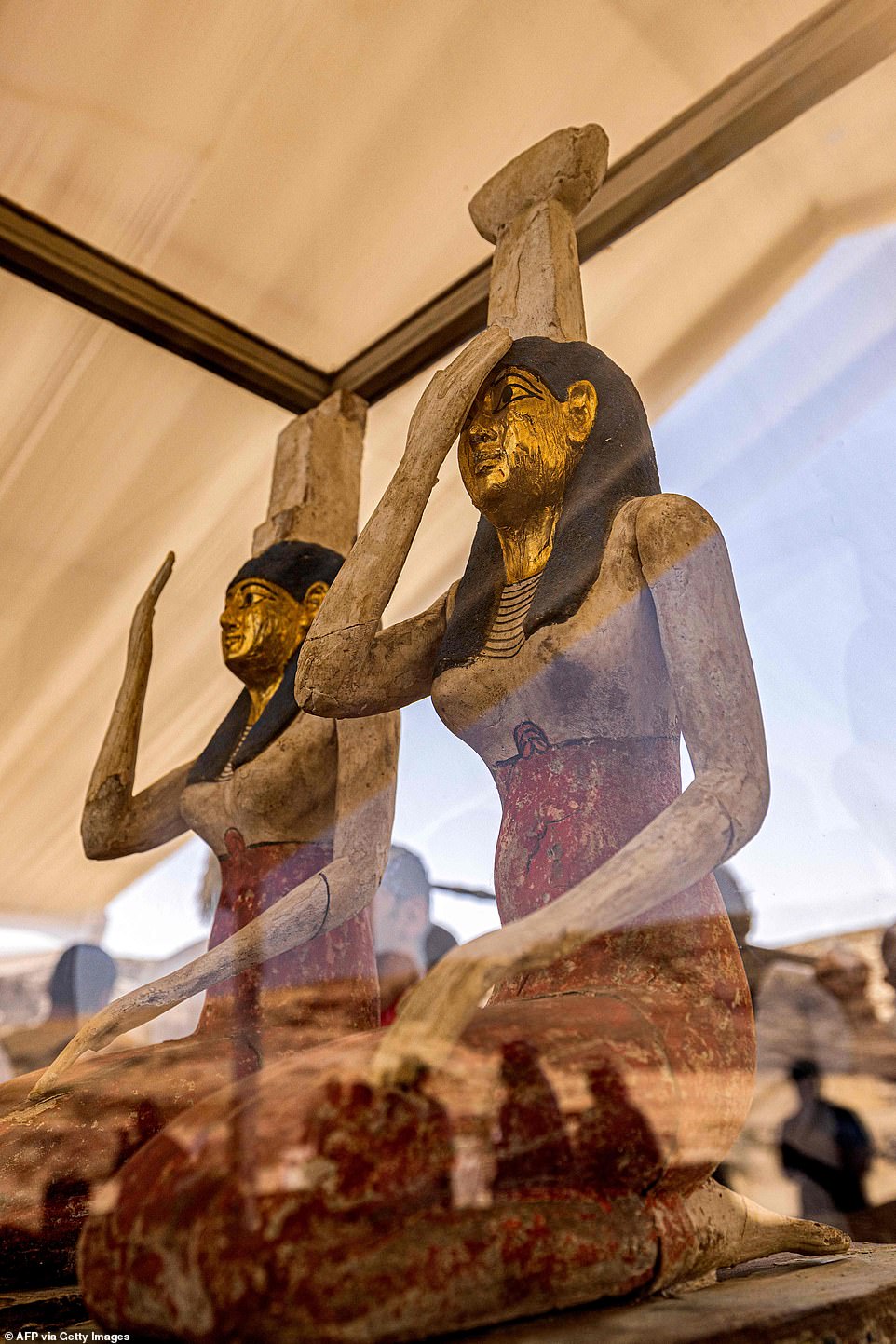 Nephthys was typically paired with her sister Isis in funerary rites because of their role as protectors of the mummy. Nephthys is a protective goddess who symbolizes the death experience, just as Isis represented the birth experience 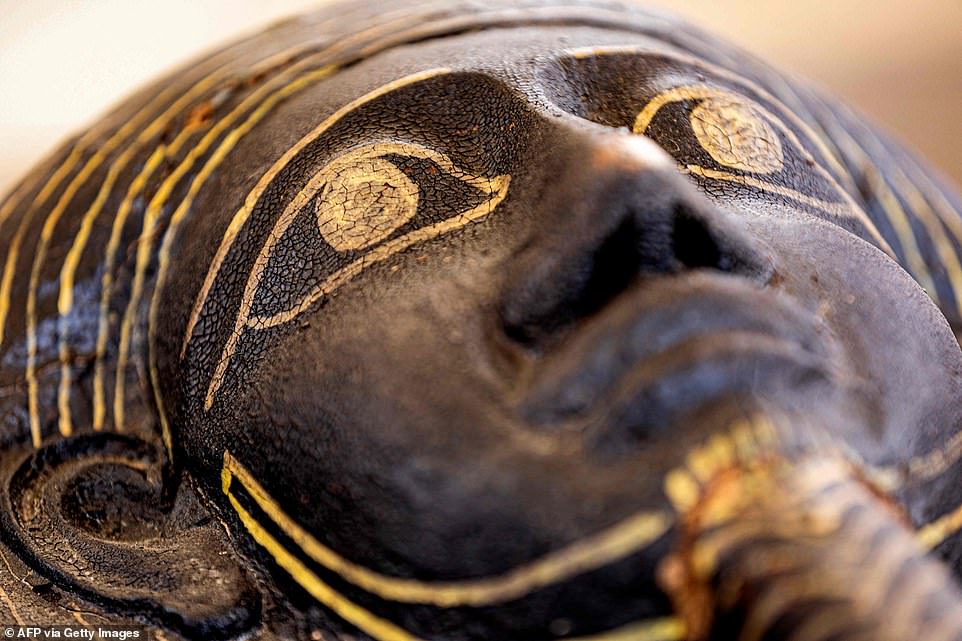 This picture taken on Monday shows the face on one of the sarcophaguses, with intricate details depicting the nose and the ears 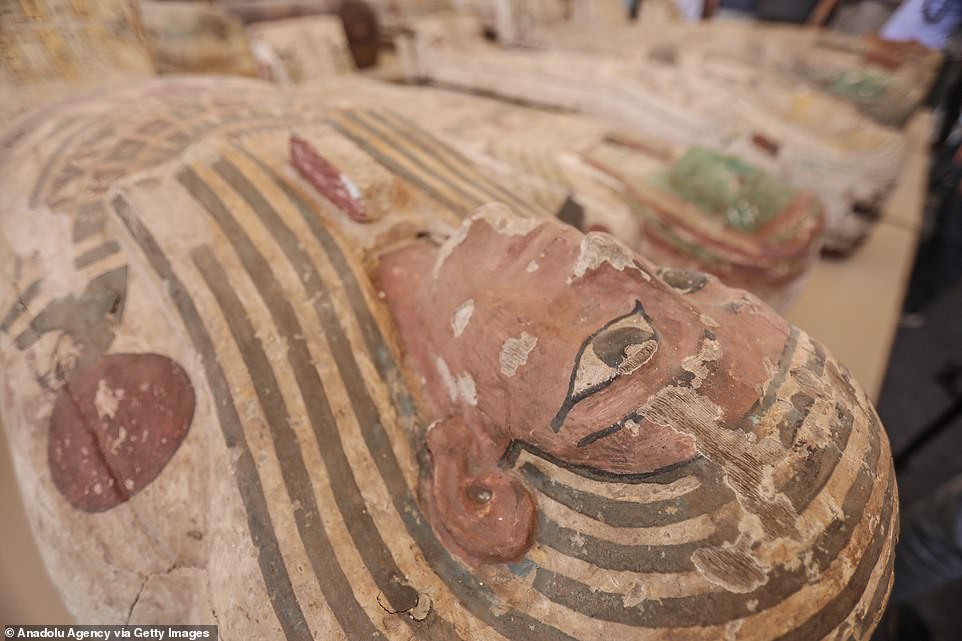 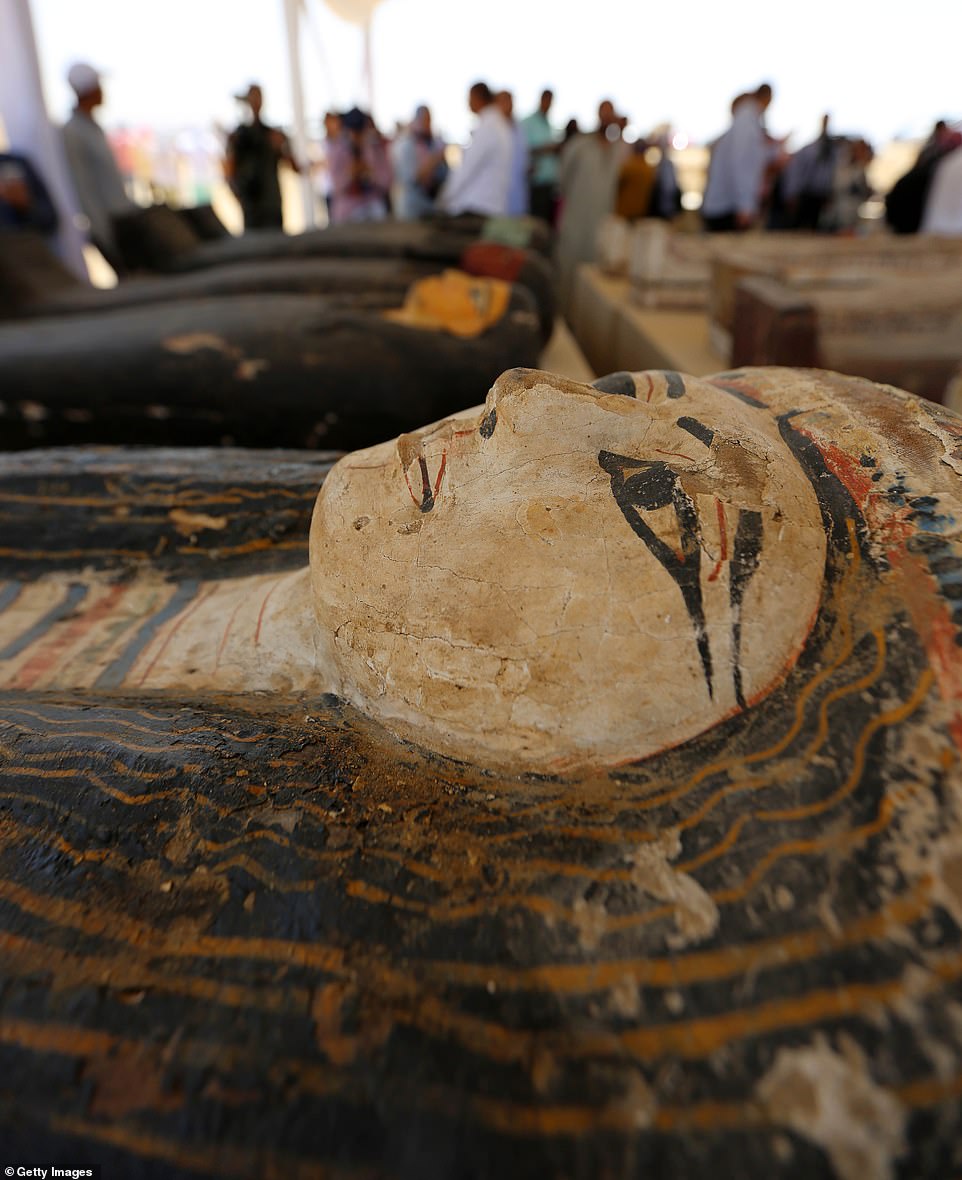 Close-up of the painted face adorning the top of the coffins. The coffins are thought to have been sealed 2,500 years ago, before the time of Jesus Christ