Is THIS why there aren’t many baby Janes or Keiths? Names go through ‘boom and bust’ – with those that become popular perceived as too common by parents, suggests study

If you envision a Jane or a Keith, it’s likely a middle-aged person’s face will spring to mind.

So why don’t these names make you think of babies?

A new study suggests that baby names go through ‘boom and bust’ – with those that become popular perceived as too common by parents.

‘Boom-bust cycles by themselves can disfavour common types and promote diversity,’ said Dr Mitchell Newberry, an evolutionary biologist from the University of Michigan, who led the study.

‘If people are always thirsting after the newest thing, then it’s going to create a lot of new things.

‘Every time a new thing is created, it’s promoted, and so more rare things rise to higher frequency and you have more diversity in the population.’ 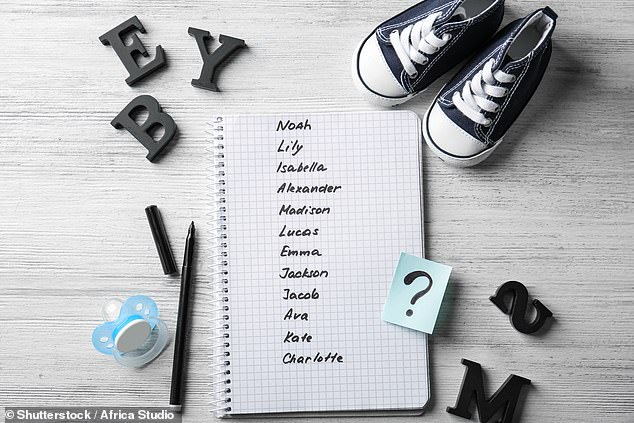 If you envision a Jane or a Keith, it’s likely a middle-aged person’s face will spring to mind. So why don’t these names make you think of babies? A new study suggests that baby names go through ‘boom and bust’ 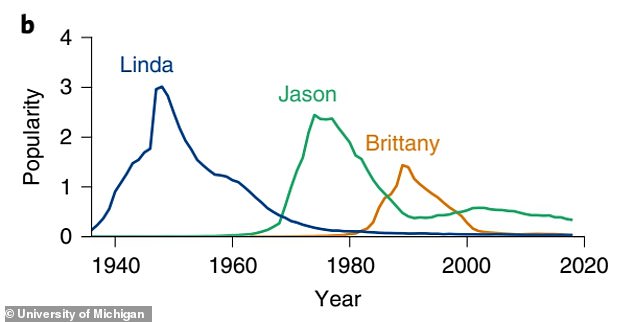 Baby names that become popular are perceived as too common by parents. Pictured: the popularity of the names Linda, Jason and Brittany in the US through the years

Most popular UK baby names of 2021

In the study, the researchers looked at frequency-dependent selection – a kind of natural selection in which the tendency to copy a certain variant depends on its popularity, regardless of its content.

‘Think of how we use millions of different names to refer to people but we almost always use the same word to refer to baseball,’ Dr Newberry said.

‘For words, there’s pressure to conform, but my work shows that the diversity of names results from pressures against conformity.’

To see how frequency-dependent selection applies to baby names, the researchers used the Social Security Administration baby name database, which includes data on all the baby names registered in the US since 1935.

Their analysis revealed that when a name is most rare – one in 10,000 births – it tends to grow at an average rate of 1.4 per cent per year.

In contrast, when a name is common – more than one in 100 births – its popularity declines at an average rate of 1.6 per cent per year.

This isn’t just the case for baby names – the same pattern can be found in the popularity of dog breeds, according to the researchers.

By analysing dog registrations from the American Kennel Club, the researchers showed that there was a Greyhound boom in the 1940s, and a Rottweiler boom in the 1990s.

‘Biologists basically think these frequency-dependent pressures are fundamental in determining so many things,’ Dr Newberry said.

‘The long list includes genetic diversity, immune escape, host-pathogen dynamics, the fact that there’s basically a one-to-one ratio of males and females—and even what different populations think is sexy.

‘Why do birds like long tails? Why do bamboos take so long to flower? Why do populations split into different species? All of these relate at a fundamental level to either pressures of conformity or anticonformity within populations.’

The researchers hope the findings will help to shed light on ecological and evolutionary change.

‘Natural selection is incredibly hard to measure. You’re asking, for an entire population, who lived, who died and why. And that’s just a crazy thing to try to ask.

‘By contrast, in names, we literally know every single name for the entire country for a hundred years.’

Without contest, 2021 was the year where pop culture was one of the biggest trend among baby names, with monikers inspired by Netflix shows breaking into the top 100.

Maeve, Otis and Eric, made popular by the character from Netflix’s raunchy series Sex Education, entered the top 100, while YOU-inspired names Love and Henry moved up the charts.

Penelope rose to number 71, perhaps influended by Miss Featherington in Bridgerton, names inspired by Made in Chelsea also rose in popularity, with Myles reaching number 56, Harry making it into the top ten, Millie in 31st position and Ollie climbing 13 places.

After a summer filled with sporting competitions including the UEFA European Championship which kicked off in June and the Olympics and Paralympics in July and August, sports enthusiasts took inspiration from their heroes as well.

Harry Kane and Harry McGuire’s exploits during the Euros saw the name making it into the top ten, while Jack was also a popular option following Jack Grealish’s rise in popularity this year.

Team GB had their second best Olympics ever in the Tokyo games this year, winning 65 medals.

With international travel being a big topic of conversation this year, with restrictions being updated to reflect the stat of the pandemic, some parents opted for wanderlust names, picking patronyms like Ocean and Destiny making the girls’ top 100.

Meanwhile, gender neutral names were also a popular trend of 2021, with Willow reaching number 20 in the girls’ top 100 list and climbing outside of the top 100 for boys as well.

Noah was a big favourite for boys, making it to second place, and it climbed in popularity with girls too, as well as Blake.

However, some names fell out of favour this year, with no new registrations recorded by BabyCentre.

This was the case for Piers, as well as Elliott, Clive, Maurice, Roger, Clifford, Dwayne, Vernon and Daryl.