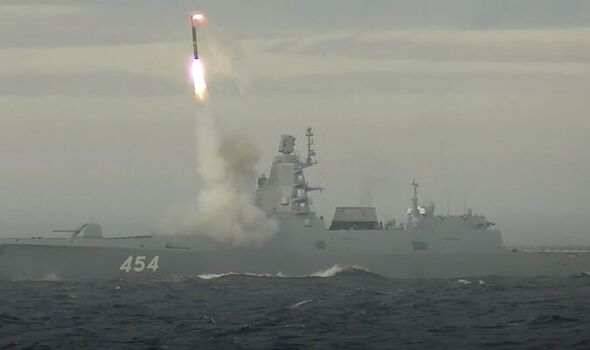 The launch was part of a testing exercise of new types of weapons, state news agency TASS reported. It cited Russia’s Ministry of Defence as saying: “Today, the lead frigate of Project 22350 Admiral of the Fleet of the Soviet Union Gorshkov fired a Tsirkon hypersonic cruise missile at a sea target position in the White Sea from the Barents Sea.” The speed of the missile was described on national television as “so high that it prevents the opponent’s air defence system from detecting its impact in time”.

President Vladimir Putin has previously said of the testing of Zircon: “Now it is especially important to develop and implement the technologies necessary to create new hypersonic weapons systems, high-powered lasers and robotic systems that will be able to effectively counter potential military threats, which means they will further strengthen the security of our country.”

TV Zvezda, a channel owned by the Russian MoD, said of footage showing the missile: “The Russian Zircon hypersonic missile’s stealth features have been disclosed…

The Zircon, branded by the Kremlin as “unstoppable”, has a “variable trajectory” to avoid detection, viewers were told in March.

The frigate’s commander, first rank captain Igor Krokhmal, said in the broadcast: “No one will see the missile launch or its flight. They will only see when the missile hits the target.

“I don’t think there will be anything to counter this in the next few years.”